How To Make Strong Coffee (The Epitome of Flavor and Caffeine)

Do you love a really strong coffee?

I wondered what it would take to make the strongest mug of mud possible.

Turns out, for the most part, you have to choose between the highest caffeine content possible or having the richest most delicious coffee possible. Because we still want to enjoy that great coffee taste right?

The richest, most flavorful, delicious coffee is probably a perfectly made espresso. A mug of coffee with the highest caffeine content possible would be a white coffee, made from robusta beans, ground finely, and boiled up for a long time; it probably wouldn’t taste great.

If you want a strong coffee that’s going to wake you up you’ll want to use robusta coffee, that’s light roast, and made into an espresso. For strong flavored coffee you want Dark roast arabica coffee. 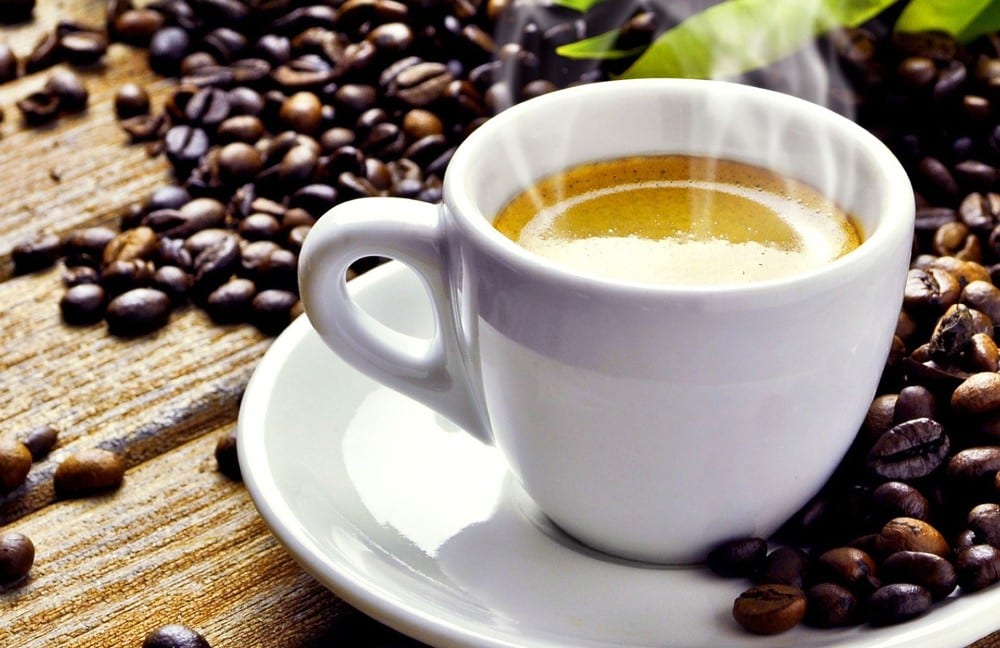 So you’ve gone through the rigmarole of trying to make the tastiest coffee possible and you’re still aching for more? Well, there are still things to try. I promise, you’ll find coffee-nirvana.

Which Brewing Method Has The Most Caffeine?

Different brewing methods certainly do give you different caffeine amounts for the same amount of beans. So here are some numbers to be able to be some sensible comparisons.

So in a typical serving, espresso has the least caffeine amount, and boiling your beans as you would with a Turkish pot gives by far the most caffeine per serving.

So to get the most caffeine in the cup, either boil it, or fill a regular 12oz mug with twelve espresso shots! You lunatic!

The amount of caffeine varies wildly with cold brew coffee. And this is because of how varied the methods are to make it, some cold brew you’re supposed to dilute after you’ve made it so you use a very high ratio of water to coffee grounds compared to other brew methods.

Then the brew time is massively higher than other brew methods which last minutes, cold brew brews for up to 24 hours which is a long old time to extract out caffeine and flavor for a strong cup of coffee.

Now brewing time isn’t everything because it’s cold not hot but it’s definitely a factor, which if you combined with a light roast coffee and Arabica coffee is going to leave you with a coffee that can pack a punch.

Why not throw caution to the wind and add a shot of espresso to the mix!

Which Brewing Method Has The Strongest Flavor?

The award for the brewing method with the strongest flavor, without any competition goes to the espresso. It is simply such a concentrated flavor.

This is the biggest factor that affects the amount of caffeine in your coffee. Because Robusta coffee can have twice the caffeine of Arabica and is usually the coffee used by companies like Death Wish Coffee who claim to have the world’s strongest coffee.

But at the cost of having double the caffeine, Robusta coffee doesn’t tend to be nearly as tasty as arabica, and most coffee shops serve arabica meanwhile most instant coffee is made from Robusta because it’s cheaper.

This is as far as the types of coffee go to affect the strength, origin and such like might have a slight difference but it won’t be a big enough one to worry about.

So more caffeine but a quick step to having a really terrible cup of coffee, which as a coffee lover shouldn’t be your top priority.

You would think that you should always go straight for your dark roast right? Dark roast, darker flavor, more intense coffee. This is absolutely true in terms of flavor, but in terms of caffeine? It isn’t…

Lighter roast actually has more caffeine in it. Starbucks blonde roast for instance has about 10% more caffeine than their regular coffee.

So it’s not a huge boost in strength in that respect but it’s definitely a factor.

Keep it simple stupid, a larger amount of coffee into your coffee maker will make a stronger coffee!

Then placebo yourself with a darker roast and you’re off to the races. But let’s dive in a little deeper.

If you’ve got your own coffee grinder then you can set it correctly and you’ll make good coffee, strength won’t be that affected by grinding finer or coarser.

A stronger cup won’t really be found adjusting the grind size, but if you’re lucky you might just stumble on to the perfect cup.

I think most coffee drinkers know that coffee shouldn’t be made with water at the boil, you let it cool a little first. And interestingly the cooler it gets the less the coffee extracts its flavors into the cup.

So while the perfect coffee brewing temperature for beautifully balanced coffee falls between 195 and 205 degrees Fahrenheit (90-96C) you can cheekily use it a little hotter at your own peril to try and get a stronger coffee.

​But do so at your own risk!

And if for some reason your using an espresso machine then I wouldn’t even bother touching the temperature, the best coffee for waking you up is sometimes having a second cup of deliciously crafted fresh coffee.

It stands to reason that if you’re using something like a French Press then the longer you brew your coffee the stronger it will be.

This is true but you also go into the realm of over-extraction where you’re going to need to fill the cup with creamer to make it remotely drinkable.

So leave your coffee a little longer, but don’t do the coffee equivalent of leaving the teabag in and coming back to it once it’s at a drinkable temperature, a guaranteed way to ruin a good cup of coffee.

It might seem strange, but a stronger flavor does not mean stronger caffeine. If anything it is actually more likely to mean the opposite; the caffeine content is probably lower.

While you can absolutely get a delicious cuppa that’ll keep you buzzing all day, taste and caffeine content are not necessarily dependent on each other.

Are There Different Names For Espresso?

While an espresso will always be an espresso, there are variations on it and it is used in hundreds of different caffeinated drinks. Without diving down that rabbit hole, here are the main variations of an espresso that any keen barista would be delighted to prepare for you!

Conclusion – How Are You Going To Make Your Cup Stronger?

In my humble opinion, the most flavorful, intense, complex tasting coffee is a dark roasted, arabica bean, espresso. Even with that one specific kind of espresso, there can be a lot of variation in the blend you choose.

I will always be delighted with just a plain, delicious, espresso. They are the cheapest coffee on the menu and certainly a dive in the deep end for a coffee newbie.

Then again, maybe you’re just looking for a sheer charge of caffeine. Sure, you could boil up some finely ground, white roasted robusta beans. If you’re that desperate for your caffeine hit maybe just skip the coffee ritual and ask your doctor for an IV bag of caffeine.