Why You Don’t Get Glass or Metal Aeropress (Danger Awaits)

I’ve seen this come up quite a lot, people asking about the possibility of getting a classier more luxury Aeropress that doesn’t use plastic.

And I completely get it, A bespoke Aeropress made out of high-quality metal or a double-walled glass contraption would look amazing…

But it’s function would be terrible.

A Glass or metal Aeropress won’t work because you’re either grabbing a boiling hot metal cylinder or you’re pressing down on a glass cylinder filled with near-boiling water that’s likely on a counter very close to your genitals.

Neither of those sounds particularly appealing to me!

And while there are ways around these problems there are deeper problems that I’ll talk about later in the article. For now, let’s look at why plastic is the only way it can work. 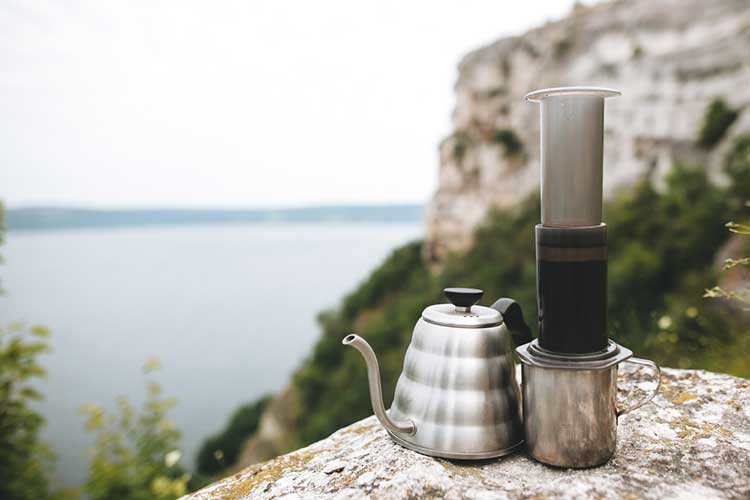 Why The Aeropress Needs To Be Plastic

The aeropress as we know it has to be made of plastic, because of the very reasons people like it.

You don’t need to be gentle with an Aeropress, even remotely, you can throw that thing into drawers, you can chuck it into the sink from a distance, and you can sling it in a backpack and take it hiking up a mountain if you wanted.

And their plastic lets you do this, it’s strong, durable, and robust.

It’s now become a household staple but a lot of people in the early days of it loved the portableness of it, light enough to carry in luggage, and the ability to have great coffee anywhere you can get yourself hot water.

Nearly every single type of coffee maker has one key detail…

A handle to separate you from the boiling hot water heating the body of a coffee maker.

It’s one of the reasons you don’t think about why an Aeropress is so odd, you pour boiling water in it and touch the outside. This only works because plastic doesn’t absorb heat very well and so can still be handled with ease and without injury.

This also works well for the coffee inside because it stops the heat from getting pulled out of the water into the container and stopping the brewing process from happening properly.

That’s the final part, it remains one of the cheapest coffee makers you can buy, and you know what’s cheap? Plastic.

But I do get that people want an expensive version when they hope for a plastic or metal Aeropress.

Limitations of A Metal Aeropress

So how does a metal Aeropress fit into any of these categories? Well, the main problem is that metal heats up, so you’d need to fit some sort of band around it similar to a Chemex, but that in turn bulks it out.

Aesthetically it would look amazing but you’ve lost some of the functionality people love and you’ve got one other problem, metal expands when it’s hot.

I believe you’d end up with either an impossible to plunge down Aeropress or a leaky one, neither of which would be good.

Limitations of a Glass Aeropress

“Even if it was certified by NASA engineers, I would never press down a plunger into a glass tube filled with 190+ degree water 6 inches in front of my abdomen and genitals.”

And that’s pretty much all that needs to be said about that.

But seriously, although a glass Aeropress I’m sure would be made well enough to not explode when you pushed it down, it wouldn’t be able to be stored in a drawer the same way, it’s just become a more complicated French Press at that point.

You’ve also got that same heat transfer problem you’ve got with metal, the glass will become very hot so you’ll need to make it double-walled at the very least but likely give it some sort of band around it.

But the main problem is the glass weakness, for the way an Aeropress is used a glass version just doesn’t make sense, it’s too delicate.

All of that said I’m sure I could easily be proved wrong. I’m sure if some engineer had the skills they could build one of these out of metal that functions effectively, and looks amazing.

But then you face another problem, the patent! Aeropress is a patented invention so you can’t make your own version to sell like you can with a French Press.

Anyway, if you don’t want the plastic use then you’re going to want to go with something like a Moka Pot, or if you’ve already got an Aeropress and don’t like that it’s made out of plastic then use the crap out of it. Throwing it away in favor of a non-plastic version is a bigger waste of plastic!

Kieran tried getting into wine but didn't like it, tried getting into whiskey and it was too expensive, then thought "I really love coffee. I wonder if you can get really into coffee?" Turns out you can!
Win a $100 Starbucks Gift Card!
Enter Here
This is default text for notification bar
Learn more