You might be wondering if water from your coffee maker can be used for other things, can it make tea? Can you make instant noodles or soup?

It depends because all of these things require boiling water, and this brings us to the big question. Do coffee makers boil water?

Generally coffee makers do not boil water, the good ones bring water to between 195-205 F which is a step below boiling and the bad ones only go as high as 180F.

So no, coffee makers do not boil water, but they can still be used to make tea and cook instant foods because it’s pretty close to boiling so it will work it just takes a little longer. 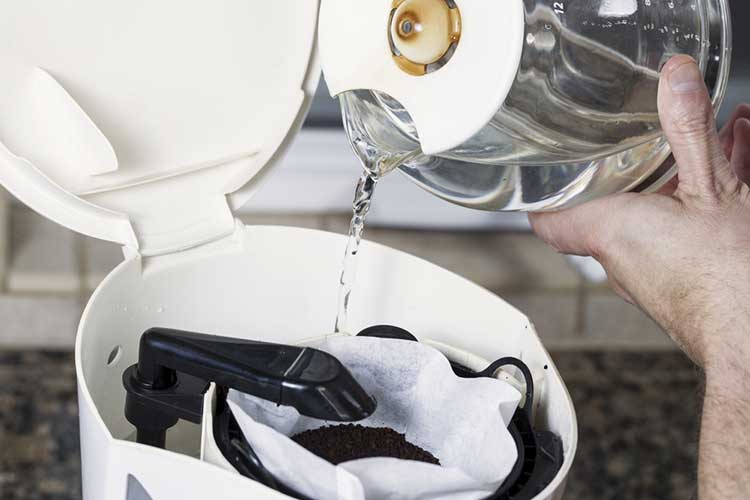 If you live somewhere that has tap water that is undrinkable without being boiled this is a serious question. It dictates whether you have to use bottled water or whether or not you have to pre-boil the water, let it cool, and then put it in the coffee machine.

Well, I’m afraid to say that coffee makers don’t kill bacteria just through the cycle of being turned on. They simply don’t get hot enough, with cheap ones certainly not getting hot enough and more expensive ones still just missing the mark.

And don’t get me started on Pod and K-cup machines, they certainly aren’t hot enough to provide any cleaning power inside the machine.

Which unfortunately both means that you’ll need to use bottled water if tap water is unclean and you should certainly be cleaning the machine periodically either with a vinegar solution or some other cleaning agent!

Emptying the grounds promptly is probably also a good shout, the inside of your coffee maker shouldn’t go moldy by itself for any reason but leftover coffee grounds certainly can. And while it’s not the worst to try and clean them up it’s a disgusting job I’m sure you could do without.

If you do get a moldy coffee grounds basket simply throw the paper filter away, or bash out the grounds from a reusable filter, and soak everything in very hot soapy water before giving it all a good scrub.

If it’s gotten to the point where everything inside the lid of the coffee machine is moldy then I’m afraid you’re on your own! I’d consider throwing the whole thing out and starting again.

The Funny Thing About Altitude

Isn’t that crazy? So in a coffee machine at a higher altitude, the water might actually come up towards the boil before going into your coffee.

And how does this affect decontamination? Well according to WHO boiling water at high altitudes still effectively kills off bacteria and viruses, and some actually get destroyed well below boiling point.

But I still wouldn’t trust your coffee machine to purify your water because the key phrase WHO uses is that the water is brought to a rolling boil, and in some cases kept there for a full minute.

This is definitely not what happens inside of your coffee machine, in a coffee maker water gets brought to temperature and then immediately goes through the system where it starts to lose heat.

Don’t Trust The Temperature Of The Brewed Coffee

I have read thousands of coffee machine reviews at this point, across all of Amazon and everywhere else and there is one thing that really annoys me…

People who use a thermometer over the coffee pot after the coffee has been brewed to claim it doesn’t brew hot enough.

Well, I’ve got news for you. Water starts to cool down after it’s been removed from the heat!

So taking a temperature reading 10 minutes after it’s come away from the water heating device is meaningless, absolutely meaningless yet I always see people saying that one coffee machine isn’t as good as another.

So if you’re looking for a coffee machine don’t trust these pictures, they don’t show you how hot your coffee is brewing.

So there you have it, your coffee maker almost certainly doesn’t boil water unless you live at a very high altitude, which while interesting probably isn’t very useful to anyone and doesn’t really change anything.

And although it will get the water hot enough to kill some bacteria it still needs to be cleaned through occasionally with a cleaning liquid of some kind and most certainly if you have any doubts about the cleanliness of your tap water then you’re going to want to stick to bottled water.

But the good news is that although it doesn’t boil water it still most likely gets it hot enough to brew tea, cook noodles, make instant soup, and even make instant coffee if for some reason you wanted to do that.