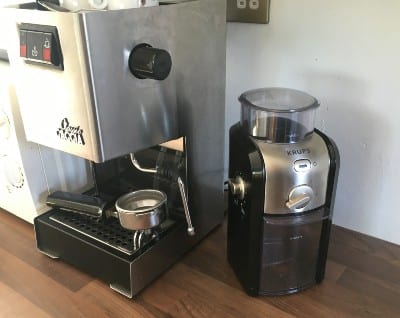 Don’t you just love the freshest coffee possible? I certainly do!

How do you get the freshest coffee possible? Well, with a grinder of course! But you absolutely want to use a burr grinder, certainly not a blade grinder.

I have had my hands on a Krups GVX2 Burr Grinder, a Krups GVX212 in particular, for about a month now. I have to say, I am damn impressed with this little gizmo.

It gives an excellent, consistent, grind. Best of all, it doesn’t break the bank, other grinders of a similar standard easily cost double.

The Krups GVX2 is almost identical to the Krups GVX1. The only difference is the GVX2 has a stainless steel front to make it look extra pretty (which also adds about $10 on to the price tag). Whereas the GVX1 is just black plastic on the front, which I think looks pretty smart too.

We recently made a coffee sheet sheet which has a handy grind size chart you might be interested in. It’s free when you sign up for Moka Pot Mondays our weekly coffee newsletter. Sign up below. 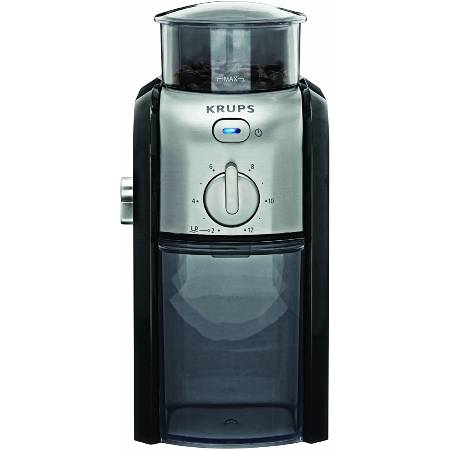 MY EXPERIENCE WITH THE KRUPS GVX2 BURR GRINDER

I have used this grinder to make Drip Coffee, Pour Over, French Press, Moka pot, and of course, Espresso.

I’m impressed at the grind consistency. Both in the size at each setting, and that I am able to switch between grind settings daily and consistently get the grind I want at those settings. The mechanism reliably goes where you want it to. 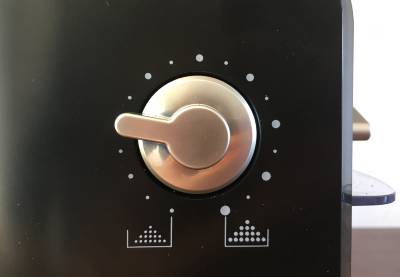 You select the grind setting with a dial on the left side of the grinder. There are 17 grind settings, going from finest, clockwise round to coarse-est.

Each setting is indicated by a dot, I think it would have been more sensible to indicate each position with a number or letter. I had to really commit the setting positions I wanted for each brew method to memory. A letter or number would have made it much more memorable.

If you were to give each dot a number from one to 17, going from left to right; I found that 13 was my favorite for drip and pour over, 16 for French Press, 6 for Moka Pot, and 5 for Espresso. I didn’t use a guide to arrive at that, it took a week of trial and error. Now you don’t have to.

I have read some people commenting on this grinder saying that they don’t like using it for espresso. I am using a 2012 Gaggia Classic Espresso Machine, with an unpressurized basket, and I’m finding it makes amazing espresso. No complaints with the espresso grind from me.

My espresso machine may be running at a particularly high pressure though (~15 Bar), which may compact the grounds more. So I’ve read. When I reduce the pressure down to about 9-10 Bar, I may need to opt for a finer espresso grind.

This little thing is solid.

While it is made of plastic, with metal burrs of course, it doesn’t feel cheap at all. Which is damn impressive because this is a relatively inexpensive burr grinder as far as these machines go.

The plastic used to make the ground coffee tub does scratch easily. I made the mistake of using a teaspoon to scrape out the excess grounds which were clinging to the inside. It has marked it a little.

I’m not personally worried about the little scratches, they are only noticeable when you look up close at it. You could never tell when it is sitting assembled on the kitchen counter.

Really, as far as electric burr grinder go, the Krups GVX series is pretty compact. Its dimensions are 10” x 5.5” x 4.5”, so it only takes up 25 in2 on your countertop. My kettle and toaster are bigger than that.

I’ve read that this grinder can heat up a bit. Maybe it’s just because I live in a cold place, but personally, I’ve never found it to be particularly warm.

I have opened up the bean hopper after grinding a load of beans, about 40 grams, and had a feel of the burrs for excess heat. Lukewarm metal. Certainly not excessive.

I’ve held the outside of the casing during and after grinding too. I’ve not come across any heat buildup.

Maybe I’m not grinding enough at once. I’m more often grinding 14g at a time for double espressos, but I’m sure most would consider the daily 40g grind for the drip machine as a relatively large batch. 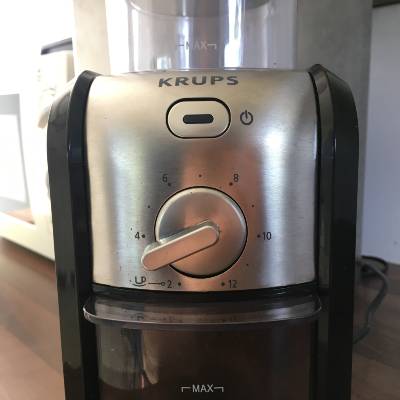 The dial on the front controls how long the grinder will run for. You set it to the number of cups of coffee you plan to make, and it grinds enough beans for that number of cups.

I’ve tried relying just on this dial for dosing.

The 6 cup setting ground up 43g of coffee beans. I’d say that’s damn close to what I would want to grind anyway.

Still, I prefer to just measure the amount of beans I want ground up and only pop that amount in the hopper. Just my personal preference.

I like to keep my beans in a jar in a cupboard because that’s pretty much the best way to store them.

I will sit the hopper lid upside down on a set of digital scales, zero them, measure out the beans I want, tip them in, turn the dial a little beyond where it would grind that amount, and hit GO.

This thing is loud.

Any time my wife and I are making coffee, I have to say in mid-conversation, “hang on, about to grind some beans”. It’s pretty hard to talk over this thing.

The noise gets pretty comical when there are no beans in the hopper. There’s no beans resisting the mechanism, so it speeds up and sounds like a jet taking off.

It doesn’t take long to grind some beans though. I’d say it’s similarly loud to running a blender. Just run the grinder and move on.

I have read some people talking about Krups GVX series grinders saying that they find a lot of static building up in their grinder. Other people have reported absolutely no issues.

Small amounts of grounds left behind, after I’ve poured most of the grounds out, can be more inclined to stick to the inside walls. It can be quite obvious when I give the tub a tap; the little fragments will fall off the inside wall, and then zip back up to a wall like magnets.

Only try this with the hopper lid, grounds bucket, or parts you have removed from the grinder for cleaning. No water in the appliance itself. Don’t.

You want to give these parts a wash sometimes anyway.

When I see static building up in the grounds bucket, which is the only place I’ve found static, I just give it a rinse under the kitchen tap. I’ll leave it to air-dry. Static gone.

For a machine that’s designed to crush things up into little bits, it’s surprisingly tidy.

I’ve only ever found a little bit of loose grounds escaping at the part where the grounds bucket meets the little exit chute. And I mean a little bit. Easily swept up off the kitchen counter with my hand.

In terms of actually cleaning the burr grinder itself, the bucket and hopper lid are just plastic, they’re easily washed. Some parts of the mechanism in the hopper are detachable so you can wash them.

The bit’s you can’t remove? There’s a handly little brush that comes with the grinder for getting into the hard to reach nooks and crannies.

I’m pretty sure I managed to get all the old little coffee clumps out of there. It wasn’t spotless, but I’m not sure there’s any need for such a thorough internal clean.

There are safety lock buttons that make sure both the grinds bucket and hopper lid are in place before the grinder will start.

While it’s definitely better to be safe than sorry, I did once have the grinds bucket pop out mid-grind because I had hastily whacked it in. Sure enough, it stopped grinding immediately.

So I’m glad it didn’t spew my coffee all over the kitchen counter.

The cost of this grinder compared to its functionality, consistent grind, and build quality is really impressive. Any other burr grinder of a similar standard that I’ve found is at least double the price.

Kudos to Krups for making excellent burr grinding for the average coffee-loving joe so affordable. Now anyone can make an Above Average Coffee.

Gotta include a nice Pros and Cons section to summarize this bean cruncher.

How do I clean my Krups GVX2 coffee grinder?

The grinder comes with a little brush for helping to get into little hard to reach areas.

The grinds bucket, hopper lid, and burr internals are partly removable so you can wash them with water away from the appliance. Just use the little brush to clean out the remaining, non-removable, internals.

Does a burr grinder make a difference?

First, compared to pre-ground coffee, it is wonderfully fresh and flavorful. The fresher the better.

A blade grinder will give a very inconsistent grind. It just chops randomly at the beans until they’re just a mess of dust and chunks. There is no control over the grind size.

A burr grinder however will crush beans down to a certain size between burrs, similar to how a salt or a pepper mill works. When the coffee bean bits are small enough to fall between the burrs, it won’t be ground down any more. The gap between the burrs decides the size of the grind; so if you move the burrs closer or further apart, you are controlling the grind size.

A burr grinder gives you a lot of control over your grind, produces a consistently sized grind, and of course freshly ground beans are so much tastier.

Can you grind peppercorns with this grinder?

Of course you can. It will grind anything that’s reasonably grindable. Just don’t put anything too solid in it, like rocks.

What is the size of the burrs?

I am super happy with my little Krups burr grinder.

I have read some people talking about it elsewhere online saying that they don’t like using it for espresso, but it’s great for grinding for every other style of brewing. Well, I use it to make espresso, and I think it makes great espresso. No complaints on that front from me. 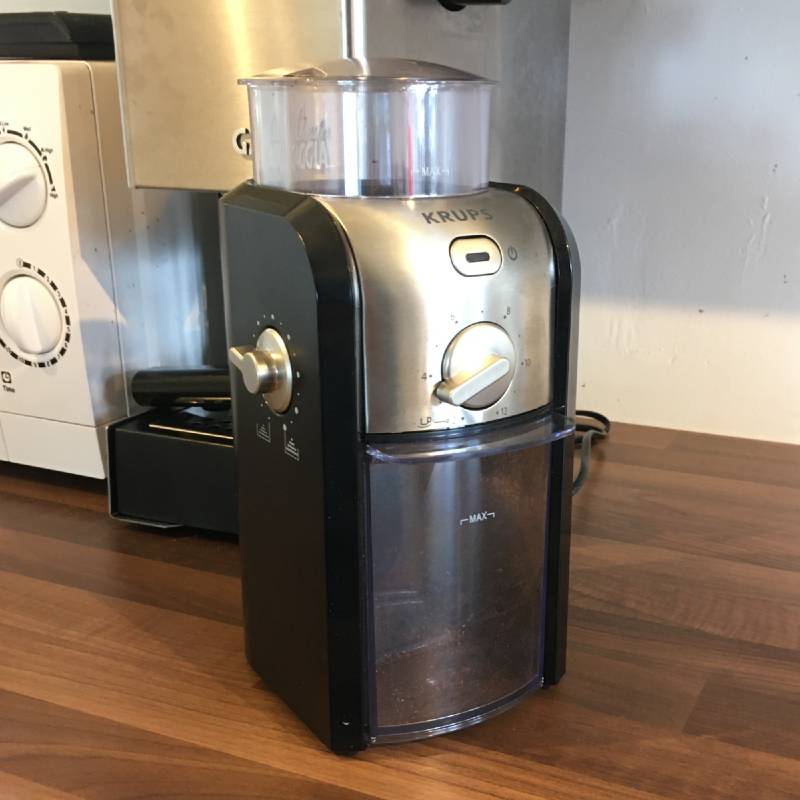 It grinds up the coffee beans super easily and quickly.

Personally, I like to weigh out the beans I’m going to use and only throw those into the hopper. Although I have tested the dose setting with a full hopper. I found that the dose settings do seem to grind out a sensible amount.

The only change I really want to this little grinder is an alternative to the grinds bucket for my espresso machine portafilter.

30 Uses For Used Coffee Grounds (From Fertilizer To Fish)
Can I Put Coffee Grounds In The Garbage Disposal? (Plumbers Answer)
The 5 Best Burr Grinders Under $50 (Busting Beans On A Budget)