What are Red Eye and A Black Eye Coffees?

Having now spent a long time researching coffee on the internet, writing about it, and drinking about as much of it as I can get my hands on, it’s not often I come across a term that leaves me puzzled.

At first, I was worried it’s similar to that awful myth that if you take a vodka shot in your eye it gets you drunk faster. Was it going to be putting an espresso shot in your eye to get you more caffeinated?

It was a term coined before just having a double shot of espresso in your coffee was the done thing. 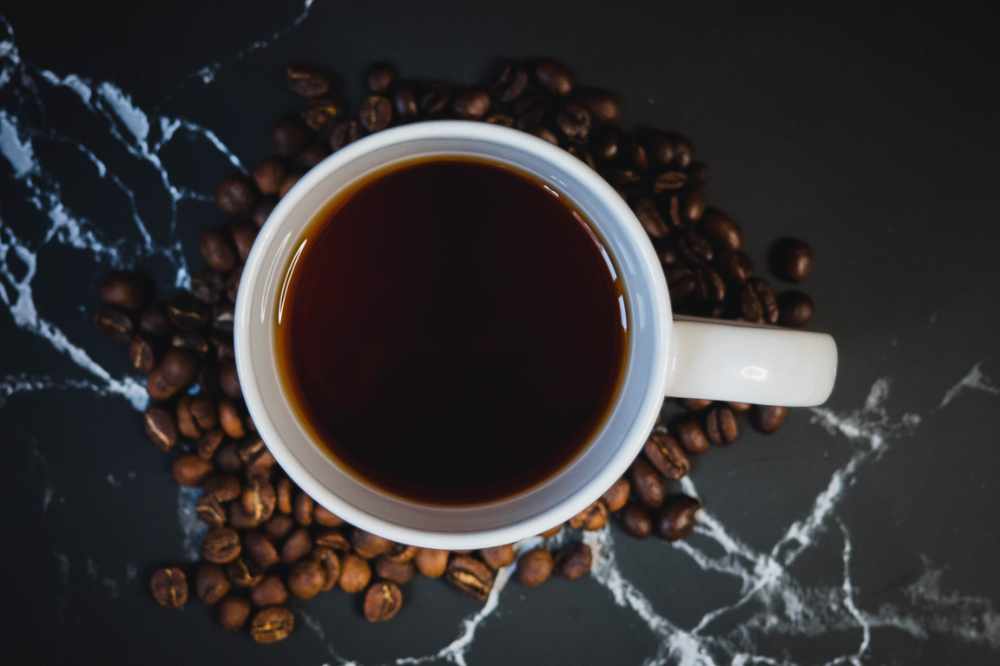 What Is A Red Eye Coffee And Where Did It Start

Red Eye coffee is a standard drip filter coffee served with 1 shot of espresso in it to give it more caffeine.

There is a lot of debate and it would be pretty much as hard as trying to find who invented beer pong or any other urban culture phenomena.

Some people seem to think it’s the coffee that gets served on the “Red Eye” flight from LA to New York, which went overnight with the lights fully on. You’d have a Red Eye to keep you awake and working all through the night for the business meeting in the morning.

But what are the chances you can get an espresso on an airplane?

I suppose it would make sense that this is what you ordered when you landed after being kept awake all night, it could even have been a special option at whatever coffee shop the airport has

At least, that’s how it seems when you’re a student and it’s midnight but your paper is due in 8 hours and you somehow spent the last month on Facebook instead of working on it so you’re going to have to pick up the pace and get this bad boy finished before the sun comes up but to do that you’re going to need some serious caffeine. Enter the Red Eye coffee.

What I like to believe is that it’s called the Red Eye because when you’re tired enough to think it’s a good idea you’ve got some very bloodshot and red eyes.

I should also point out that it has nothing at all to do with weed!

What Is A Black Eye Coffee? 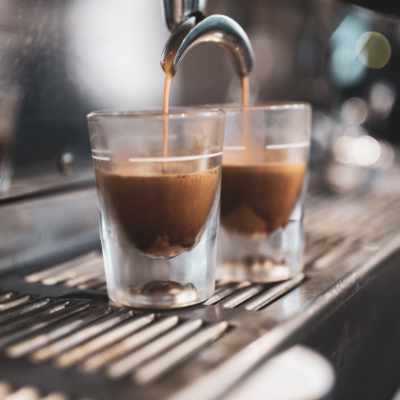 A Black eye coffee is any standard non-espresso coffee that gets 2 espresso shots added to it at the end, usually served black.

Black eye coffee as a name makes slightly more sense because when you put the espresso shot into the coffee it forms a black ring, like an eye.

And where ever there is one person stupid enough to try something there’s someone somewhere willing to take it one step further.

So if one espresso in your coffee isn’t enough then why not double up and double down and have 2 espresso shots for the ultimate cup of wake-up juice.

What is Dead Eye or Green Eye Coffee?

Dead Eye Coffee, or Green Eye coffee as it’s also known, is a standard non-espresso coffee such as a filter coffee that gets 3 espressos added to it.

Which will leave you with the shakes and an inability to concentrate so I can’t imagine anyone wanting to order this or feeling any better after doing so.

The Dead Eye is likely because it can wake up the dead, so maybe it’s supposed to be a sobering drink to get you over your hangover?

All I know is this would leave me with heart palpitations and an inability to focus on anything for more than 5 seconds.

How Does A Red Eye Coffee Taste?

As I said, I didn’t feel brave enough to order a whole one of these myself, and it’s currently the Covid Lockdown at the time of writing so getting to a cafe isn’t the easiest!

But co-owner Scott was on it with his espresso machine, ready to get himself started for the day, the short story is it tastes like a more intense americano, which when I thought about it made sense since you’re making an Americano but using filter coffee instead of water.

Which is a way to think about a Red Eye coffee that I think makes it even more intense.

Here’s What Scott thought about it:

I guess, similar to AeroPress.

There were still those caramely bits that espresso brings. 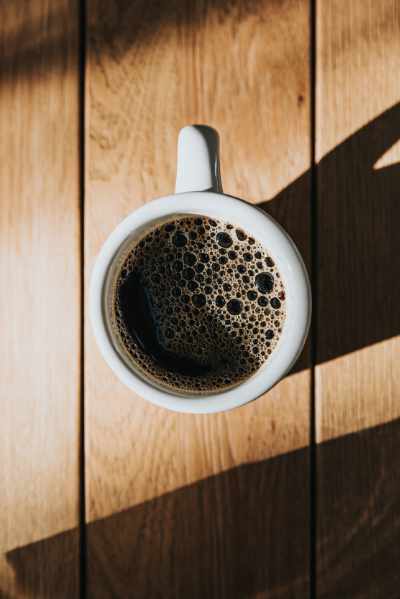 It certainly got thicker, more syrupy, toward the end of the mug.

Like, if you stretched out an espresso. A big espresso, but not quite as strong. The top had the smoothness of drip, but with extra boldness.

The end of it was thicker, kind of like if you just had an extra espresso. Not as solidly strong as an espresso, but very espresso-ey.

The crema was good when it was just an espresso, but fizzled away pretty quickly once it hit the drip coffee. That is if it wasn’t left clinging to the inside of the espresso cup.

So a very intense experience but definitely not unpleasant, and a hell of a way to wake up in the morning!

If any of you give it a shot please let us know in the comments how it is.

How To Order A Red Eye or Black Eye Coffee

If you go into a Starbucks, or any other coffee shop and ask for a Red Eye coffee there is a good chance you’re just going to get a funny look and asked what it is.

Because it isn’t that popular and isn’t at all common, so when you’re asked please no what you’re asking for!

You want a filter coffee with either 1 or 2 shots of espresso in it.

Or get a latte with an extra shot in it.

Other Names For A Red Eye Coffee

The Red Eye coffee is very regional, and depending on where you go you’ll find the same drink by many names.

Of all the names I found, the Depth Charge has to be my favorite. Not because of all the other connotations this has but because in Poland, a Depth Charge is when you get a shot of Vodka and put it inside a pint of Beer.

And if these names tell us anything, it’s that it’s a very intense and very strong cup of coffee!

How Much Caffeine Is Present

The question of how much coffee there is a cup of coffee is a bit like how long is a piece of string, it’s just a little too hand-wavy to get any useful information. So I decided to go with Starbucks, they make fairly standard coffee, and if you wanted to order one of these coffee’s then a Starbucks is a pretty good place to do it.

A Red Eye coffee made with a 12 oz pike place coffee and 1 espresso shot will have 310mg of caffeine in it, 75 mg from the espresso, and 235 mg for the filter coffee.

You could make that more intense by ordering a Venti size, 20 oz of coffee in which case you’d have 485 mg of caffeine. 310 for the filter coffee and 75mg for the espresso.

Now if you were having a black eye coffee that would be 385mg of coffee in a tall 12oz cup of coffee with the 2 espressos, or it would be 560mg of caffeine in a Venti size!

That is a seriously large amount of caffeine, the little bottles of 5-hour energy have 230mg of caffeine for reference, so your Venti Black eye coffee is almost as much as having two of those.

No wonder people get the jitters after having too much coffee!

How To Make It At Home

But I could be wrong which is why I thought I’d include this section. 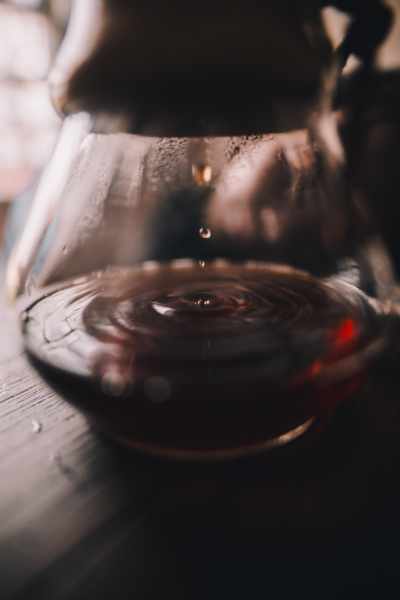 The easiest way would be to use a drip machine and make a jug of coffee as you normally would. But you can honestly make this any way you want, if you want to brew a French Press coffee, a Chemex, or if you’re feeling especially brave you could even make yourself a Moka Pot coffee.


Regardless, make yourself a mug of coffee with enough space for an espresso, you might need to use the biggest mug you can find.

If you’re lucky enough to have an Espresso machine at home then you’re well on your way to making this drink a reality.

If you don’t have an Espresso machine then one of those pod machines could work, it won’t be as nice but if you can make yourself an espresso with it you’re moving in the right direction.

And if you have neither of these then you’re going to need to wait until you can go to a coffee shop before you can try one.

So get yourself an espresso made if you can and put it to one side.

It really is that simple, pour your espresso into your coffee and you’re good to go.

Next time you’re settling in to do an all-nighter, or you’ve just done an all-nighter and now you need a pick-me-up ready to get going you might consider this.

I personally won’t, just a plain ole espresso will be plenty for me but if you’ve got a heavy caffeine tolerance then this might be that next level coffee hit you need.

Just be sure to allow enough time to run to the bathroom before you’re needed anywhere!