Can You Reuse Coffee Beans For A Second Cup?

I was looking at my drip coffee maker ready to clean it out and use it again, and wondered, can you reuse coffee grounds? I was pretty sure you couldn’t, but I’ll be honest I tried it, I made my pot of coffee and then put in the same amount of water again and ran it through a second time. The result?

You can’t reuse coffee beans unless you want a coffee that tastes thin and watery as if you’ve not used enough coffee. Compared to fresh grounds reusing grounds makes you a much words brewed coffee, no matter what brewing method you use

My cup tasted more like a delicate cup of tea which wasn’t as bad as I thought it would be but certainly wasn’t a tasty cup of joe. Not something I would do as a coffee lover.

Which I thought made sense since one round of coffee has been taken out of the cup already, so you’re going to be left with less coffee. But I wanted to know the reason why so I took to the internet and went into my coffee library to find out.

It turns out the absolute maximum amount of coffee that you can extract out of the bean and into your cup is 30%, that’s how much of the bean can be turned to coffee before you’re pouring water over it and nothing is happening.

Coffee professionals aim to extract 18-22% of the coffee when they use it, now that’s a pretty small range but 18% will taste of a weak coffee that’s delicate, and 22% will taste strong with a thick syrup-like feel in your mouth.

So even if you’ve made a weak cup at 18% and then go to reuse the beans the maximum extraction you’ll get is 12% which is, of course, going to taste watery, weak, and just terrible all around really. 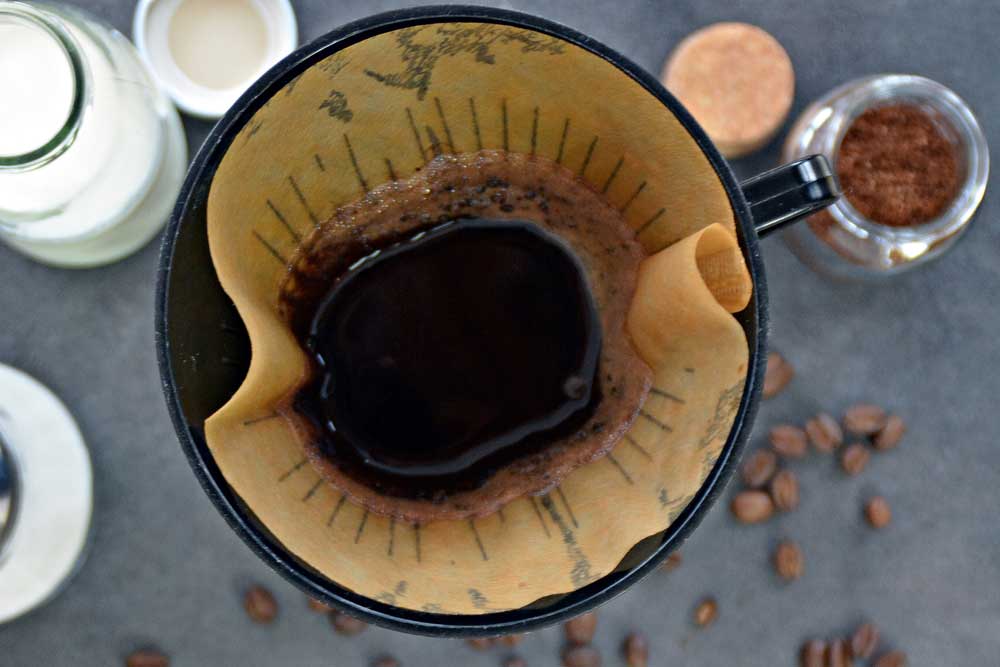 Is there any danger to reusing coffee grounds?

Now if you want to reuse your coffee grounds and you’re still wondering if it’s safe, let me tell you.

As long as you reuse the coffee grounds the next day at the latest you’re going to be absolutely fine. Any longer than that and you might start running into trouble, because coffee grounds are a very fertile place to grow things and if you leave them things will start growing. This makes for excellent composting but not good for keeping in your home.

I know I’ve left my drip coffee machine for a few days to use my french press instead only to open it up and see a small mold mountain starting to grow in the middle of the coffee grounds… Not good. Coffee is a breeding ground for this sort of thing, not what you want to find when you got to brew coffee in the morning.

But yes as long as you don’t let that happen you can reuse coffee grounds and you’ll be fine.

But to have respect for yourself as a coffee drinker I wouldn’t bother.

How much caffeine is left in used coffee grounds?

Now, this isn’t a clear-cut question because it will depend on how long you first brewed the coffee for and on the type of coffee you use, did you know that robusta beans have twice the caffeine of arabica beans?

How does that compare to normal coffee grounds? I’ll tell you, again it will vary but the average is about 13mg per gram of coffee, so it’s less than half the caffeine leftover which works out about the same ratio as extracting 18% of the coffee the first time with 12% leftover.

Can you reuse coffee grounds in cold brew?

Cold-brew is a completely different way to make coffee, yes but it still involves the same process of extracting the coffee out of the grounds. And you still hit that max limit where you can extract some of the last of the coffee out but you won’t be able to extract it all.

And if you’ve made cold brew and want to make a second round with the same coffee, I’m afraid the same thing is going to happen, you’ve gone through the first extraction, it’s unlikely you’ve got enough extractable coffee left in the grounds for a second round.

Can you reuse coffee grounds in any other coffee maker?

The rules apply across the board, it doesn’t matter if you’re making espresso, using a drip filter, you’re using a french press, a v60, AeroPress, or any other pour-over device. If you try and make a second cup of coffee it’s going to be weak.

Although an experiment I’m yet to try is to make enough coffee for four people and then try to reuse the beans to make a single cup of coffee, less water but more beans generally make a stronger coffee so I think this could be enough to offset reusing the beans. Unconfirmed though, and I don’t often make a 4 cup pot of coffee so I’m not sure when I’ll get to try this, but when I do I’ll be sure to update.

What are other ways to reuse used coffee beans?

This is probably the easiest way to reuse your old coffee grounds, you can put them in the compost pile, paper filter, and all, and leave them there or you can use them in pots and coffee beds.

A word of warning, don’t dump excessive amounts of coffee grounds over the entirety of your garden, especially if you have new seeds planted because you can effectively drown them and stop them from being able to sprout. I doubt you’ll be drinking that much coffee to make that many coffee beans but I thought I should say.

But, some coffee grounds sprinkled on top of your post can be great for your plants, used coffee has lots of nitrogen as well as phosphorus, and some other micronutrients that seep into your soil keeping the plants happy.

Where they won’t work, is as a bug and insect repellent, slugs, and snails are thought not to like caffeine, but they’re willing to put up with it if there are some delicious plants on the other side! The same goes for ants, ants happily cross coffee beans to get to whatever you’re trying to protect.

Yup, coffee beans work great as a deodorizer, working to remove smells similar to baking soda. But the most important thing to do is to let them dry out completely before you use them, spreading them out on a baking sheet is the easiest way to do this. And if you live somewhere humid then into an oven on low heat can work too.

But once they’re dry you just put them in a glass and cover with a piece of saran wrap and poke a few holes in it and put it in the fridge.

Finally, they make a great exfoliant and it’s really easy, you can apply them directly with some water to your face and body or mix it with some coconut oil to make it a more delicate coffee scrub. A great little DIY project

But, you can even use them as a lip scrub if you mix them with some honey. Just scrub it on to remove any dead skin and smooth out your lips then apply a little lip balm to stop them drying out further.

The same goes for your face or body after you scrub, make sure you’re using a moisturizer to rehydrate your skin now that all the dead skin has been removed.

Just like exfoliating your face, coffee grounds can be a great cleaning scrub for getting out tough dried dirt on your pots and pans. Just add a little warm water to some coffee grounds and work it in with a sponge.

It can work on your kitchen counters too but be wary of what the color is, you don’t want to accidentally stain any scratches that are already there a deep brown color!

Want to know something cool? Coffee grounds can be used to tenderize meat! Just like salt, and citrus coffee grounds break down the meat slightly leaving you with a tender more juicy steak ready to cook.

The problem is coffee tasting meat can be a bit strange unless you’re making barbeque, in which case you can easily add in some dried coffee grounds to your spice mix and rub away! It works with fresh coffee grounds too as a heads up.

So again you can do it, but I don’t think you should because the coffee will taste below average at best and that’s not what we’re about here. Besides a cup of coffee at home doesn’t cost a whole lot so there’s no good reason in my mind to make a second sub-par cup, have a drink of water instead.

But know that if you do try it it’s completely safe so you don’t need to worry about doing any harm to yourself and you certainly won’t make yourself sick.

But even if you’re in a hurry, I wouldn’t bother running water over the same coffee, it’s not going to give you the pick me up a morning coffee should. And while it will save money you’re coffee is less than half as good so not worth it.

Have you tried making a second cup out of the same grounds? Do you want to? Let me know what you think in the comments if you do reuse coffee grounds, as an at-home barista I’m not a fan but if you are I’d love to hear from you.