It can be a wonder what you’re supposed to do with leftover coffee, you make an enormous pot only to realize you’re not going to have time to finish it.

You could pour it down the sink but that seems wasteful, so how about freezing it? Is that a thing? Can you freeze brewed coffee?

In short, you can freeze coffee but you’re not going to want to drink it later. The taste is completely ruined if you try and heat it up again from frozen, even defrosting it in the refrigerator. But what you can do is freeze your brewed coffee and turn it into ice cubes, these are actually quite fun to have in the house.

But how do you make them? What use are they? And if you’re really determined to freeze coffee to drink later then read on… 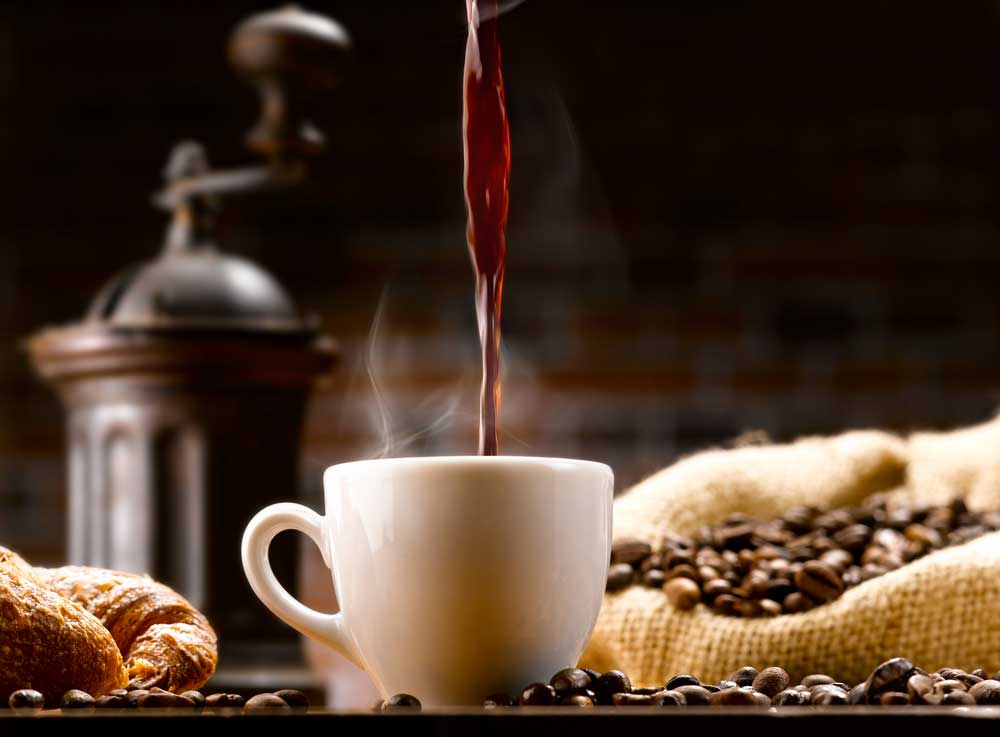 How Do You Make Coffee Ice Cubes

As I said, coffee ice cubes are the best use for frozen coffee, they work in a few different places that I’m going to talk about later and you don’t reheat them at all so don’t have to face the not so nice coffee flavor anymore.

But making them isn’t as easy as pouring them into an ice cube tray and leaving them in the freezer there’s an important extra step.

Step 1. Brew your coffee as normal, drink what you can then allow the leftovers to cool down. Putting hot coffee into the freezer isn’t good for whatever else you’ve got in there, causes the freezer to work extra hard, and wastes a lot of power. You can, of course, put hot coffee in but it’s not a good idea.

This is important because coffee is an odor magnet, you can use coffee beans to deodorize your refrigerator it’s so good at deodorizing. So you must cover coffee up any time you’re storing it otherwise you’ll end up with coffee that tastes slightly off whatever else happens to be in your freezer.

Smells are more minor in the freezer but it’s still worth covering so that the smell doesn’t leak into the coffee.

Step 3. Freeze it! If it’s a normal-sized ice cube tray it’s going to take about 4 hours for your brewed coffee to completely freeze. After that, it’s ready to use.

I’d stick to just freezing black coffee where possible because if you add milk there’s a good chance it’s going to separate while it’s freezing and you’re going to end up with some very gnarly looking ice cubes. They won’t necessarily taste any worse but they won’t be pretty and certainly won’t be appetizing to look at.

Iced coffee is nice and all but it always gets watered down when you pour it over the ice because the ice melts and lets lots of extra water into your perfectly brewed coffee. But what if those ice cubes were made of coffee!

A big glass full of iced coffee cubes ready to have coffee poured over it, what’s not to like? A cool refreshing drink on a hot day and you’ve got a perfectly balanced cup.

I’d stick to using the same type of coffee together if you do that, preferably the same roasts as well otherwise you might find the flavor combinations a bit odd. Not the worst but there is certainly going to be something strange about it.

Do you make smoothies? Protein shakes? Even milkshakes? Any situation where you’re blending ice and can be used to substitute your coffee ice cubes. Vanilla, banana, and coffee is my personal favorite protein to shake to have, just a couple of coffee ice cubes and you’ve got a nice undertone of coffee that’s not overpowering but really lifts the overall flavor.

I wouldn’t recommend going too fruity, strawberry, blueberry and coffee for instance probably won’t taste the best but experimental and have fun, you never know what fun coffee creating you’re going to come up with at the end.

Coffee is acidic and can be used to nicely balance out a meal you’re making, anywhere you add vinegar why not add a coffee ice cube instead? Chilli, for instance, that deep flavor will go nicely with a dark roast coffee.

Equally so with steak or a BBQ marinade, try throwing a coffee ice cube in with it to highlight the dark rich flavors of the red meat. I know it sounds a little odd but trust me, it’s really tasty.

Not all plants but a lot of plants do really well some extra acidity, it takes a little research but if your plant likes acidic soil, a coffee ice cube once every 2 weeks could nicely do the trick to keep it healthy and flourishing.

Not too often, if you’re doing it every day you’re likely going to end up doing more harm than good.

You’ve been warned, it doesn’t taste great and certainly doesn’t taste as good as fresh coffee. If it’s too many beans you’ve got you’d actually be better off freezing the coffee beans and using those to make fresh coffee instead of brewing extra coffee and freezing that.

But if you have to, let’s make sure you do it properly.

Tip 1. Don’t go from freezer to heating up, it’s not worth it and the coffee doesn’t heat up equally so you end up boiling the coffee that’s not frozen while the rest defrosts. You want to leave it in the fridge overnight so that it melts and then heating it up from there.

Tip 2. Don’t overheat it, as Scott said in his article on reheating coffee you’re going to want to take it slow when you’re reheating in the microwave, 30 seconds to begin with then down to 10-second bursts so that you don’t completely overcook it. This can help with the reheating process and does what it can to preserve the flavor.

More recently he wrote an article specifically on reheating cold brew which you should definitely check out.

Can You Freeze Cold Brew Coffee?

Cold brew coffee can be frozen and is the coffee that tastes the best after it’s defrosted. Alternatively, cold brew ice cubes can be used to make iced coffee or are delicious to eat by themselves. Make sure you are freezing it in an airtight container and you’re letting it defrost completely before you drink it again.

No, it isn’t as good as it is when you’ve made it fresh but it’s still pretty damn good. Cold brew lasts about 2 weeks in the freezer before it starts to deteriorate but it will be safe to drink for at least a few months after that.

How long does brewed coffee last in the freezer?

The damage is done as soon as the coffee is frozen, losing some of those essential oils that make up the taste profile of a coffee. So once it’s in there it can stay in there for a good long while. About 3-6 months is generally a good rule of thumb but the taste will begin to fade after about 2 weeks.

Can you freeze coffee beans?

Just freeze it sealed and completely defrost it sealed before you open it to ensure no moisture gets into to start ruining your coffee.

Can you freeze hot coffee?

You can but it certainly isn’t good for the freezer as it has to work twice as hard to cool down. It can also cause some of your other freezer products to thaw slightly then freeze again which is where bacteria starts to form especially if it happens to raw meat. Best to leave it to cool down, too cold if possible but cool is fine too before you freeze it.

Can you freeze iced coffee?

You can put iced coffee in the freezer but the problem is it’s all going to freeze together into a big lump, and if you want to turn it back to iced coffee you’re going to have to thaw it in the fridge and then add more ice cubes which will dilute the taste further.

Once it’s iced coffee it needs to be drunk.

And there you go, I can recommend making coffee ice cubes if you have a little coffee leftover and you’re not sure what to do with it. But freezing coffee to reheat and drinking it later isn’t a good idea. It’s going to ruin the taste and leave you with a cup that just tastes flat and lifeless, not bursting with flavor as a good coffee should.

If you’ve got too much coffee in bean or ground form best to freeze that rather than brew it and then freeze it.