Does Chai Latte Have Coffee In It? And Is It Considered a Coffee?

Does Chai Latte Have Coffee In It? And Is It Considered a Coffee?

It’s served in Starbucks and it’s got the word latte in it, so it must be a coffee right?

Actually no, Chai Latte’s are a spiced tea made with frothed milk, not a coffee as no coffee beans are involved whatsoever. But it is made with black tea so you will still have caffeine, not as much as a cup of coffee which I talk about further down. So it is a hot beverage you’d have in a coffee shop while out with friends but it isn’t, in fact, a coffee.

Latte is the Italian word for milk, the latte as we know it in coffee shops is short for Cafe Latte, coffee with milk, Likewise Chai Latte is short for Masala Chai Latte which is spiced tea with milk.

It’s packed full of sugar and sweetness and absolutely delicious in autumn and winter but you knew that right?

Read on for more about the Caffeine as well as what’s in a chai latte and how you can make yours at home. 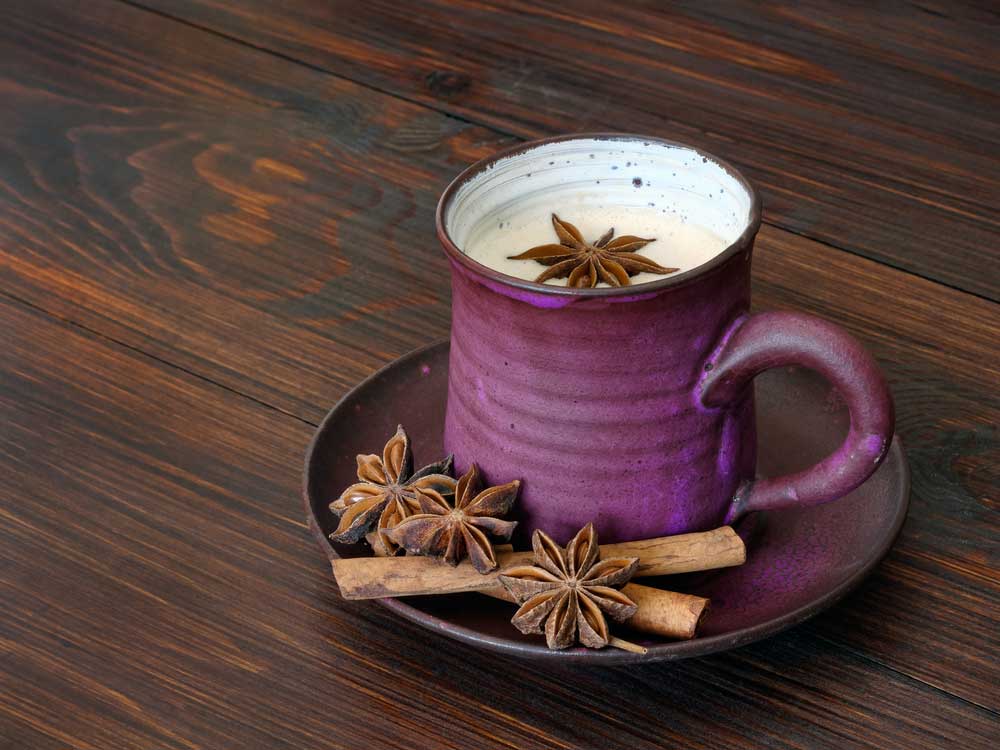 So what better place to look than the Starbucks website. If you make it at home it will be different, as it will be if you order it from a different coffee shop but this is just the rough guide. Starbucks comes in four main sizes so let’s compare each one to a regular coffee latte.

The Coffee Latte has the two amounts based on either 1 espresso shot or 2 espresso shots, but what’s interesting is the chai latte doesn’t actually have that much less caffeine in it, For the difference of tea to coffee I thought it would be much lower.

It means that Starbucks uses a lot more tea than I would have expected! I kind of assumed it would be mostly sugar and flavorings so that’s a pleasant surprise.

Of course, if you make it at home the amount will be different, and if you order a coffee latte with extra espresso the caffeine content will be higher still. But that’s the rough guide.

Is Chai Latte A Substitute For Coffee?

What’s In A Chai Latte?

As I said before it’s a blend of spices that go into a chai latte, so what’s in it will depend on where you are and who you talk to, In India where it comes from everyone has their recipe.

But let’s go with two, I’ll share the main ingredients in the Starbucks chai, and then an apparently authentic recipe I found on Reddit.

Bother of course also have milk and black tea as ingredients. So Cardamom will be the more unusual spice you might not be used to attesting that you pick up when you have a chai latte, and the cinnamon, of course, gives it that wintery taste and the ginger adds the warmth underneath it all.

Those three are your main ingredients with all the other spices coming from personal preference and in Starbucks’ case universal taste.

Can You Make A Chai Latte At Home?

I’m sure you guessed that yes you can! But it’s not how you’d expect it to be made, and it certainly won’t taste like Starbucks, I’d argue it’ll likely taste even better.

It’s very unusual to boil the milk but this brings together all the flavors nicely, after that you add plenty of sugar to taste or maple syrup if you’ve got. It makes sense you’d need sugar to mask the boiled milk taste but it’ll be delicious all the same!

Can You Add Coffee To Chai Latte? The Dirty Chai

Anywhere the tea world and coffee world meet shall be a most disconcerting and unusual place. This is no exception.

You can, in fact, add coffee to a chai latte, and some people love it, so much so it has gotten its own name, a dirty chai…

It’s not something I’d heard of before writing this article, and I can’t wait to try one because it’s simply a chai latte with an espresso shot in it. I’m writing this during Coronavirus lockdown but as soon as it’s over I’m going to a coffee shop and asking for this.

I am positive I’m going to get a funny look and asked if I’m sure but I think it sounds tasty! All the sweet spiciness of the chai mixed with the bitter flavors of a coffee, color me intrigued I’m dying to give it a shot, and when I do I shall report back.

Other Things To Know About Chai Tea

I’ve covered all the basics but there are a couple of other things you should know.

1. It’s Better For The Environment

Tea uses far less water than coffee, I’m not talking about in the making of it at home but in the harvesting it. Tea leaves get washed once but Coffee beans get soaked and washed multiple times before they’re ready to be roasted. It’s actually about 10x the water that goes into getting your coffee beans to you.

But I think this is only a factor where there isn’t enough water, and coffee tends to be grown where there is water in abundance.

2. You Can Make It With Other Tea Types

Black tea is the most traditional but you can use green tea for a less caffeinated version and even rooibos or yerba mate. This is if you’re making it at home, a lot of coffee shops use pre-made powdered versions so if you ask for a green tea version you’re going to get a big fat no in your face.

Same with a lot of coffee products Fairtrade is rife throughout the tea Industry so always something that’s worth looking out for if you’re buying your own.

4. Many chai products are USDA Organic.

Again not all of them but a sign or some recognition on the packet of being organic is always a good thing to look out for.

So there you go, chai latte isn’t a coffee but it does contain quite a lot of coffee and you order it in most coffee shops. And if it looks like a coffee, ordered in a coffee shop, as part of a coffee order, then it’s probably a coffee am I right?

Sadly no, but it’s so delicious and tasty that it deserves a place on the menu for every coffee shop as a welcome to autumn the months are getting colder. That’s the place it will have in my heart whether it’s a coffee or not.

How To Make Chai Tea At Home