French Press Letting Grounds Through? Here’s What To Do

French press coffee will always have some sediment in it, it’s just part of making coffee that way.

But it can go too far and your coffee can feel like it’s more sediment than liquid so here’s what to do.

French press coffee will always let some grounds through, it’s part of that style of making coffee. But when you plunge it down, look to see if grounds are escaping around the edge of the filter, if so you’ll likely need a new filter. Next, after you’ve plunged you’re going to leave it for 2 minutes to let any escaped grounds settle back down before gently pouring out.

The main problems from a French press usually come from either your grind being the wrong size, or you’re plunging too hard. Or you could have a broken French press, here’s how to check and make sure you’re getting your coffee right. 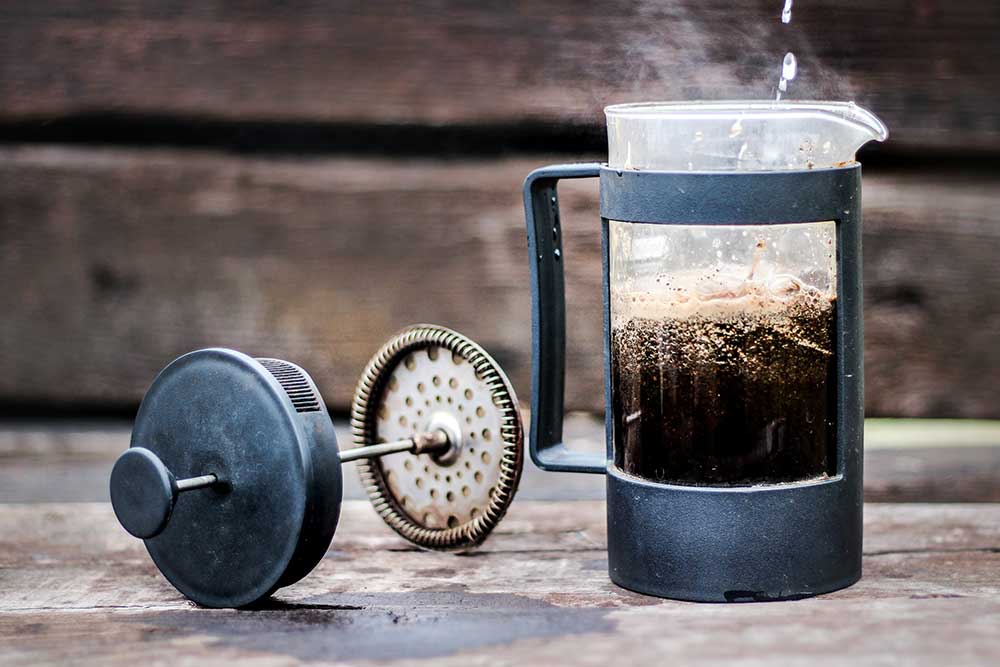 I had this problem with my single serve french press, there were a lot of grounds left in the cup, and I mean a lot.

Your Plunger Could Be Squint

So next time I used it I looked in the side of the glass carafe and saw that the plunger was going squint when I pushed down and the coffee grounds were streaming up the side into the main coffee chamber.

I thought I’d need a new press, it was a cheap one so no big deal, but it turned out that I wasn’t screwing it together properly, I could screw the base on till it was tight but there was another piece above the filter that I could tighten to lock the whole thing together. Now, no more grounds streaming through the sides.

If you see this happening check thoroughly to make sure the plunger is flat and you’ve screwed everything you think you can tighten so it’s tight and make sure it feels sturdy like it won’t move.

If you’ve got a metal press this will be harder, all you can do is give the filter a wiggle and see if it moves, if it moves a lot and easily this might be the problem but it’s hard to say.

If the filter is bent out of shape you might find that you need a new filter, if it’s not creating a smooth seal around the edge of the carafe.

Check the Filter For Holes and Wash It Thoroughly

If you’ve got a very old filter you might find that in washing it a small hole has appeared, now ground coffee isn’t very big so it doesn’t take a big whole to start letting grounds through.

Dismantle the whole thing and give the filter a good look over to make sure no holes or tears are present.

If there are, you can buy replacement filters on Amazon if you click here.

The filters are metal and they’re quite resilient so this is quite unlikely to happen but if it does you’ll soon know about it .

You want to go for a coarse grind for a french press, although there are different methods you can see here for different grinds.

If your grind is too fine it’s going to be able to pass through the filter, but it’s not as simple as the right setting, because a cheap grinder will cause lots of “fines” which is essentially coffee dust even on a coarse setting. And it’s these coffee fines that pass through the filter giving you a muddy cup of coffee.

This is especially the case if you use a blade grinder, on a coarse setting they typically give you boulders and powder rather than a nice consistent grind.

You want some fines to come through because that’s what french press coffee is and is a big part of why people like this brewing style, but I talk about that further down.

If you’re buying pre-ground coffee for a french press make sure it is that, if it’s ground for an espresso machine or any other technique it won’t be quite right. If you buy your coffee at a coffee roaster/cafe tell them you’re using a french press and you should be fine.

But if you want to take your coffee to the next level then a coffee grinder is a great choice for your next purchase.

You want a smooth action of plunging, you’re not forcing it down your just gently lowering it into the coffee, and after that you’re letting it sit for a few minutes.

You won’t over brew it because not enough water is making contact with the beans and the water that is doesn’t easily pour out. This just allows all the fines and grounds that made it through to settle back to the bottom of the cup, and provided you pour it out gently without up ending the damn thing you’ll be left with a much cleaner cup of coffee.

Some people leave it up to 8 minutes but I’ve found 2 minutes is plenty.

Make Extra And Leave It Behind

There is more sediment at the bottom of the press than the top so if you make too much and leave the last two mouthfuls of coffee in the French press your cup will be a lot cleaner. I leave enough liquid to just come over the filter.

It’s not a ton of waste, and if you’re making multiple cups at once make sure you pour some into each as you go so the fines get evenly distributed across all the cups, otherwise the last cup is going to feel much thicker than the first cup.

You can do the same while you’re drinking the coffee too, that last mouthful of French press is normally pretty nasty so just leave it in the cup, no one judging and it makes the whole coffee drinking experience a lot nicer.

Why French Press Coffee Always Has Grounds In It

French press coffee uses a metal filter rather than a paper one, and as such it allows more of the coffee oils to pass through which give your coffee a thicker mouthfeel, think buttery, but it also lets through more of the fines which give a different taste and feel to the cup.

This is why some people don’t like French press coffee but it’s personally why I love it. You get used to the thickness of the coffee and start to look for it and enjoy it.

There is a limit and leaving it to settle takes the worst of it out but to me, French press coffee is supposed to be thicker, that’s what allows more of the flavor into the cup for an even tastier drink.

Some people decide to use a paper filter in their french press but to me, that just ruins it, if you’re going to do that you might as well just get a drip machine and make a pot of coffee that way. Which to be clear I also do, and enjoy, it’s just different ways of making coffee.

It’s all about taking your time and being gentle if you’re making french press coffee. Accept there are going to be some fines inside the cup and make sure the hardware you’re using is up to scratch.

It could be as simple as your filter is bent out of shape and you need a new one. It might be you need to readjust your grind size.

No matter what it is, relish the chance to solve the problem and start making yourself a better cup of coffee at home.