How Long Should You Brew a French Press? Find Out The Optimal Time

Today I’m going to be carrying on the French press series of posts I’ve been working through, last time I talked about the coffee bloom in a French press to find that it’s optional but worth trying out yourself to see if you like it, and that stirring is more important.

Today I’m going to look into French press brew time, and after extensive research I have found that there is no right length of brew time, there are a ton of different opinions and techniques that you can use, as always. But, if you’ve bought pre-ground coffee an ideal brew time for a French press is 5 minutes. This is with a brew ratio of 1:16, i.e. 1 gram of coffee per 16 ml of water.

And yes you want to use a timer for this, 5 minutes is plenty of time to allow the beans to saturate and extract all the flavors, some people say go for 4 minutes but from what I’ve tried that’s not quite long enough, I think 4 minutes 30 seconds might actually be the ideal but it depends on the coffee you use and how you like it. If it tastes bitter at 5 minutes then reduce the time.

However, if you can grind your own beans then you can experiment a little more with some of the other lengths of time, read on… 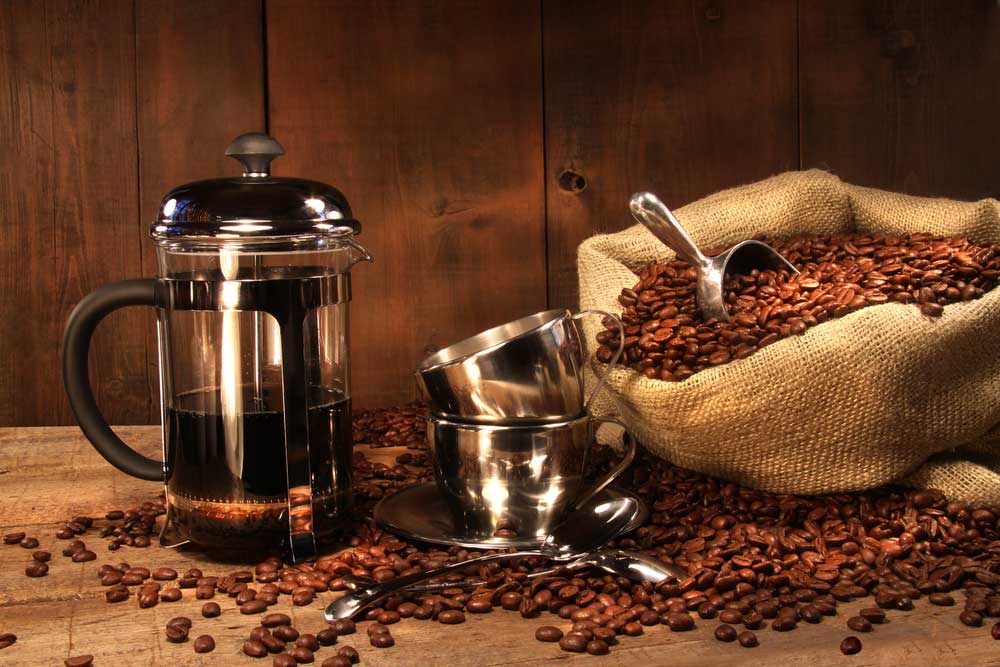 This is a longer brew time and requires you to have your own grinder, so it’s a step above the standard method I suggested but does result in a better cup of coffee. There is definitely a trade-off with time and a French press, the longer you can wait the better your coffee will be, but the longer it takes.

Anyway, this method I found in the Craft Coffee, A Manual book by Jessica Easto, who attributes it to barista Nick Cho of Wrecking Ball Coffee in San Francisco, it’s a bit different and makes a nice cup of coffee so I thought I’d include it.

The basis of it is using a coarser grind that will extract slower and leaving it to brew for longer so that a more balanced flavor comes out at the end.

Step 1. Boil your kettle and take it off the heat for a few minutes, grind your beans, and measure out the amount you need in your Cafetiere.

Step 2. Start the timer and add the amount of water you need and leave it for 30 seconds.

Step 3. Stir the coffee and cover it with the plunger but don’t let it touch the coffee just yet.

Step 4. Once your timer sounds after 8 minutes gently push down the plunger so you don’t agitate the coffee too much, pour out and enjoy.

It’s the same method you’d use for a shorter brew time too; only the extra coarse grind stops the coffee from over extracting and turning bitter.

Not the sort of thing you’ll want to do first thing in the morning but it’s fine to try at the weekend and compare the two methods to see which you prefer and if you can taste the difference.

This is the ultimate French press method developed by world champion barista James Hoffman, it’s slow, it’s fiddly, and yes it provides the best cup of coffee but it’s easily a 10 minute process getting there.

If you don’t like the sort of bitty sludge at the bottom of the cup then this is the method for you.

So again one for the weekend but I don’t blame you if you don’t want to make it your regular method.

Check out the video below or I explain the steps below that.

Step 1. Boil your kettle and take it off the heat for a few minutes, grind your beans and measure out the amount you need in your Cafetiere. The same as the above method and how you start any French press coffee.

Step 2. Start the timer and add the amount of water you need and leave it for 4 minutes.

Step 3. Stir the crust from the top through the coffee and then with two tablespoons you’re going to scoop the foam off the top of the water

Step 4. Leave it for 5 minutes at least, preferably 8 minutes to allow the bits of coffee to settle at the bottom.

Step 5. Place the plunger on the surface of the coffee but don’t press it down! That disturbs all the coffee at the bottom, you just want to use it as a filter to catch any stray floaters.

Step 6. Pour out and enjoy.

As I said, this is the most hassle but gives you the best tasting cup of coffee out of any of the methods so it’s up to you if you want to try it. If you’re feeling adventurous and want to really start “getting into coffee” as we are here at Above Average Coffee then definitely give it a go. And let me know in the comments how you get on.

What does brew time actually do? Well you go from water to coffee by soaking the flavor out of the beans, and you get more contact between the bean and the water when they’re ground up.

So the longer you leave it to brew, the more flavor is going to get extracted. But don’t take that to mean the longer the better, because coffee has lots of bitter flavors and unpleasant flavors in it, and if you leave it brewing too long these get extracted and leave you with not a very nice cup of coffee.

But too little time and you haven’t allowed long enough to get these flavors out and your coffee will taste watered down.

Coffee is as much an art as it is a science so getting it right takes some practice and some experimentation, take 5 minutes as your base and try some experiments of your own. Just make sure that’s the only thing you’re changing, if you change how much water and how long you won’t know what it was you liked better.

Try 5 minutes, then with the same coffee and same grind try 4 minutes and see what you think. Then try 4 and a half, the technical term for this is dialing in the coffee, you tweak the different dials till you get it just right. And if you’re like me you get it just right as you run out of coffee and need to start again. But that’s the fun right?

What Else Affects Taste

As I hinted at earlier the grind size will certainly affect the taste of your coffee, and this is because a bigger grind leaves less surface area exposed to the coffee. But too fine a grind and it will pass through the filter leaving you with a coffee that feels thick and heavy in your mouth and is probably bitter because it’s been over-extracted.

Coarse is the golden middle ground just like 5 minutes is, if you’ve bought coffee pre-ground for a cafetiere it’s probably medium-coarse because that’s a good catch-all.

How Much Coffee Is Used

More coffee = stronger flavor but not always for the better, that’s why the difference between ratios is important and subjective, anywhere from 1:14-1:17 is where people usually like to make French press coffee.

But that’s exactly why it’s so important to get a scale, a tablespoon is too inaccurate and doesn’t allow for a lot of repeatability, you want to make good coffee every single time you use your french press, and the easiest way to do that is by weighing it.

If your water isn’t hot enough then it won’t extract properly, the easiest way is to bring your kettle to the boil and then allow it to cool, if you try and catch it before the boil, well you can but it’s another skill to learn so easiest just to bring it to boil and then leave it a minute or two to cool.

I bring my kettle to boil then start arranging the actual coffee into the french press, the time it takes to get the scale and weigh out the coffee is usually enough time for it to cool down to the right temperature.

I wish I could give you a straightforward answer, it would be nice if it were as easy as exactly 5 minutes, but then it wouldn’t be as fun now would it? The fun is experimenting and changing things and trying to make your coffee better and better.

So start with 5 minutes and if you don’t like it change it! If it’s too bitter then try 4 minutes and if it’s not strong enough dare to try 6 minutes! But do it with a timer, leaving it for a bit won’t give you a very repeatable cup of coffee.