Why Would You Put Butter in Coffee? (It’s Delicious and Decadent)

There’s nothing more satisfying than a fresh brewed cup of coffee to start the day. I love a large mug of jet black coffee to energize me first thing in the morning. As much as I enjoy black coffee, nothing quite beats a delicious, creamy latte mid-morning and I’m also partial to a decadent mocha come evening time.

To put it simply, I love coffee any way it’s prepared. Whilst working to expand my coffee knowledge, I keep coming across the phrase “Butter Coffee” or “Bulletproof Coffee”. With all the fantastic coffee combinations already available, I was left with the question, why put butter into coffee?

Butter in coffee is said to help energize you compared to drinking black coffee alone. The butter is said to prevent the caffeine hangover effect by slowing the uptake of the caffeine and helps fuel you throughout your day. 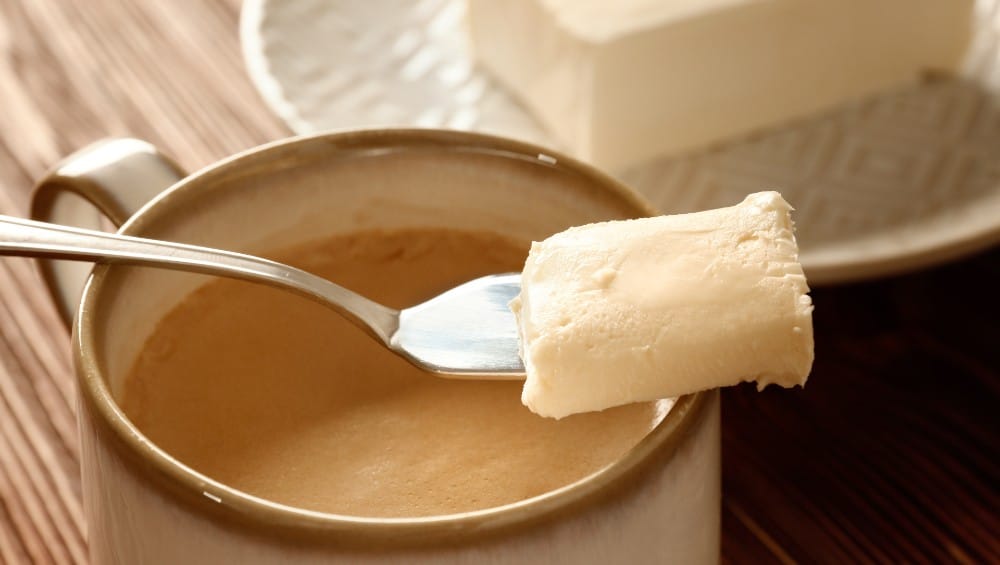 If you’re a fan of coffee and its many varieties that exist these days, you’ve probably come across the term “Butter Coffee” or “Bulletproof coffee”.

When I first came across the concept of adding butter to coffee I was immediately divided on how I should react. Simultaneously I was kind of grossed out by the idea but also very intrigued.

The “Bulletproof” craze that exploded into the mainstream was first blogged about by Dave Asprey in 2009. He is the founder of the “Bulletproof” brand which has grown from a coffee company to more of a franchise. Whilst Asprey has popularised the drink, the combination is actually a lot older than it would first appear.

Let’s head back in time to the 7th century to the Tang dynasty in China. This is where the tradition of butter tea originated. Also known as po cha, the tea is brewed from tea leaves, yak butter with added salt.

It is still popular today in the himalayan regions of Nepal, Bhutan and India as well as in Tibet and China. Before a long day working out in the high altitude a cup of butter tea is the perfect calorific boost. It is custom to serve to guests and is drunk in small sips. This allows the host to continuously top up the tea and so the guest never finishes the bowlful.

Coffee mixed with butter also has historical routes in Ethiopia. The pairing is a recognized combination at traditional coffee ceremonies. The woman would typically lead the ceremony by roasting the beans over an open fire.

The beans would be ground as the guests enjoyed the fresh roast aroma and then the fresh coffee was brewed in hot water. The grounds are brewed three times and the solution is sieved afterwards. The delicious drink is served in special cups and this is where sugar, salt or traditional butter was added. A side of popcorn seals the deal and the burning of incense adds to the atmosphere.

It would seem that coffee and butter is an old medley that spans way back in history. People have been enjoying the union across various geographical locations so it’s no wonder it has made its way back into the public eye.

When I think of coffee I think of rich caramel or chocolate notes with a nutty fullness. A gentle bitterness rounds off the sip and a citrus or floral edge is not unusual. The addition of sugar cuts away excess bitterness as does adding a splash of milk or cream.

When I think of butter I think smooth creamy flavours. The slight milky tang that goes so well with a pinch of salt seems at home on a warm piece of bread or melted over a baked potato to round off the meal. The greasy texture of butter seems counterintuitive to mix with your smooth velvet cup of joe.

Before I tried the combination, I imagined ruining a perfectly good cup of coffee by ending up with little lumps of separated fats floating around and giving rise to an unpleasant, greasy experience.

After brewing a cup of java fresh in the drip machine I gingerly added it to the blender with a tablespoon of good quality (grass fed) butter. After a minute of blending I was surprised with the result.

The coffee took on a light brown colour similar to adding milk. Instead of greasy droplets, a rich foam had developed on top making it appear like a latte. I had considered adding sugar prior to my first sip, to balance out the unpleasant tang I was anticipating. I’m glad I refrained from laying on those extra calories however, the taste was absolutely lovely.

The coffee bitterness was balanced beautifully with a rich creamy sweetness. The texture was silky smooth and had a thick quality to it. As the foam settled, I did note a greasy layer forming. I guess that’s to be expected. It certainly was a lot more satisfying that I had expected but it did leave my lips with a weird lubricated quality. Probably useful if you’re prone to chapped lips, this drink certainly has a lot to offer.

Cream vs Butter In Coffee?

Which is the better choice, heavy cream or butter in your morning cup of java? There’s a lot of debate surrounding this question so lets bring it back to basics.

1 tablespoon of butter has about 100 calories whereas 1 tablespoon of heavy cream has around half that amount at 50 calories. Calories are a basic unit of energy and people often monitor their intake to prevent weight gain.

Both butter and cream are high in saturated fat. 1 tablespoon of butter provides 7.3g whereas the same volume of heavy cream has 3.5g. Saturated fat gets a bad rep but it’s actually an essential nutrient that our bodies require to stay healthy.

The main vitamin found in dairy, vitamin A is important for your immune system, your skin health and your vision. 1 tablespoon of butter contains 7.1% of your daily vitamin A requirement whereas 1 tablespoon of heavy cream has 4.4%.

So, in summary, 1 tablespoon of butter contains almost twice the calories and nutrients to heavy cream. Heavy cream may be a better option if you’re looking to watch those calories or if you prefer the taste. Butter is more nutrient dense so will likely fill you up for longer if this is your breakfast substitute in the morning.

So why all the hype surrounding Bulletproof coffee as opposed to just regular coffee with butter?

Well, bulletproof coffee was designed by the entrepreneur Dave Asprey back in 2009. It is designed to combat the caffeine slump that many people suffer from following that initial buzz.

Caffeine acts to up regulate our bodies metabolism when drunk. It gives you a burst of energy that keeps you alert and can aid fat burning whilst active. When this wears off though, the byproduct (adenosine) of this increased metabolism can build up in your system which puts your brain into sleep mode. This effect is often worse if coffee is consumed on an empty stomach.

This issue led to the invention of the Bulletproof coffee.
The black coffee is brewed and 2 tablespoons of butter are added.
The importance of grass fed, good quality butter is stressed here alongside the trademark, upgraded coffee beans sold under the bulletproof brand.
These are blended up alongside 1tbsp of MCT oil (Brain Octane oil) and voila, there you have a Bulletproof coffee.

The idea is that the butter and oil combination feeds a steady supply of energy to your brain so combats the unpleasant caffeine slump.

It is important to note that, although the website claims this is a healthy option, 1 cup of Bulletproof coffee contains 440 calories. If consumed alongside a hearty breakfast this can contribute to weight gain over time. Also, the actual scientific evidence for the brain enhancing theory also seems limited.

If you like the sound of butter coffee but can’t eat dairy then don’t despair. Vegans can celebrate as there is a great alternative available. Coconut butter is made from the flesh of the coconut and it tastes just as succulent.

It’s full of a compound called lauric acid which helps strengthen your immune system so good news all round. At 105 calories per tablespoon it has a similar calorie content to dairy butter. Just blend 2 tablespoons into your fresh brew and the result is both decadent and delicious.

Heavy Cream In Coffee (Let Me Convert You)