Can You Use A Lever With An Aeropress to Make Espresso?

Have you ever looked at espresso machines, wanting to be able to make your own espresso, but not wanting to shell out on one of those expensive appliances? People have tried to make concentrated coffee from every coffee gadget in the hopes of making something even slightly similar to an espresso. It’s still not espresso.

There is one coffee brewing method which has a glimmer of hope for being able to produce something slightly similar to espresso. Can you make espresso with an AeroPress if you push it really hard?

The key to espresso is using hot water at a pressure of between 7-10 Bar to extract the coffee. If you could press an Aeropress plunger down really hard, say using a lever, then you could potentially build up some fairly high pressures. That said, an Aeropress is not designed to hold high pressure, it would almost definitely break. 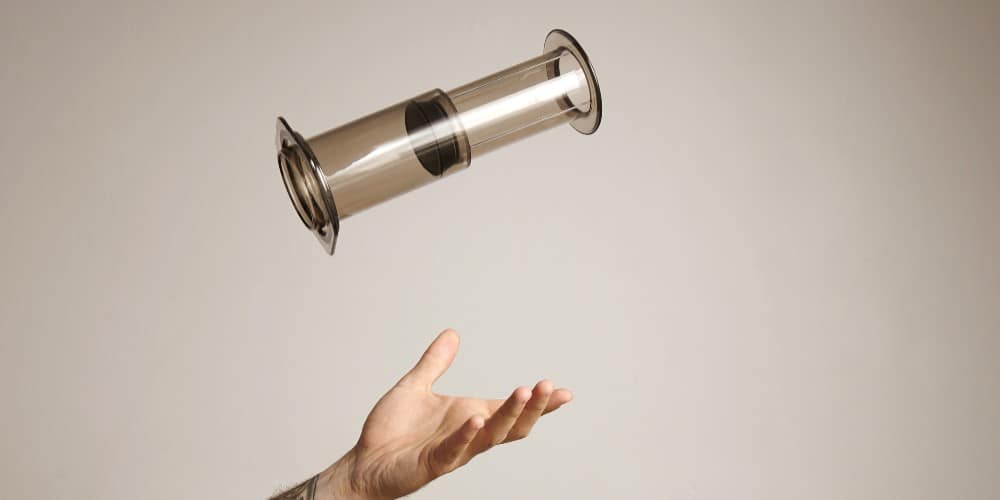 Espresso really is a unique method of brewing coffee. While there loads of different coffee brewing methods and styles, there is nothing quite like espresso.

The key aspect which sets espresso aside from all other brewing methods is pressure. Forcing hot water through ground coffee at high pressure is what makes espresso so special. It also makes espresso fast, express, it gives it the bold strong flavor, and the distinct frothy top, crema.

In short, pressure allows you to produce a very concentrated coffee, the likes of which you cannot dream of making without pressure. It also speeds up the extraction. An espresso only takes about 25 to 30 seconds to pour.

When the hot pressurized water hits the coffee grounds, it causes oils in the ground coffee to emulsify and become the lovely frothy goodness we all know as crema.

The coffee beans are ground finely to help toward this speedy extraction. A finer powder can react much faster than a coarse powder. This fine grind, paired with hot water at high pressure, is what allows the espresso extraction to run so quickly and become so concentrated.

The result is, well, espresso. A small shot of concentrated coffee, with a frothy top, made in seconds.

What Is An Aeropress

If you’ve still not come across an AeroPress, allow me to catch you up.

The AeroPress is a brilliant coffee-brewing gadget. It looks something like a giant syringe, or an engine piston and cylinder.

When you brew coffee in this plastic tube and plunger, you will pop a paper filter in one end, dump your ground coffee in the cylinder, fill it up with water. Leave it to brew for a little bit (similar to a French press). You sit the AeroPress on top of your mug, press down on the plunger, and the water is forced through the ground coffee.

Can You Generate Pressure In An Aeropress?

The really interesting thing about the AeroPress is: because its design is so similar to an engine piston and cylinder, or to a syringe, these devices usually involve generating pressure. It naturally leads you to wonder; can you generate pressure in an aeropress?

Well, yes and no.

The Aeropress site says that the gizmo can generate between 0.35 and 0.70 Bar. For comparison, an espresso machine uses between 7 and 10 Bars of pressure to produce that rich, smooth, espresso.

So the Aeropress does generate a little bit of pressure, but really not much. The coffee it makes certainly isn’t considered an espresso either.

How To Generate More Pressure

An Aeropress does generate some pressure, but not much. Not enough to make the brew an espresso anyway.

But can we generate more pressure? Can we just push the plunger down really hard?

Well, yes, but not by hand.

What’s more, the Aeropress is only made from plastic. Building up near 10 Bars of pressure in a plastic cylinder is a great way to destroy your handy dandy Aeropress. (For comparison, atmospheric pressure is about 1 Bar; another 10 Bar on top of that is nuts.)

Forgetting about the plastic part. Can we just push an Aeropress down really hard to make more pressure?

Yes, if you push the plunger down inhumanely hard, you generate higher pressures.

Don’t try that yourself. If you don’t break the thing, you’ll have a hard time not toppling the Aeropress over. They can be wobbly on top of mugs.

First thing’s first. However, you’re imagining to press that Aeropress really hard, you should use a hardier Aeropress first. Plastic might not break immediately, but I promise it will eventually. It just isn’t tough enough.

What is tough enough? Metal.

We’re getting a bit hypothetical now. A metal Aeropress would surely hold the pressure; provided the plunger and filter at either end are also built with a tight enough seal.

Unfortunately I don’t think a metal Aeropress exists. Or one made from any material other than plastic. Also, the metal would certiainly get hot quickly.

Although there are metal filters available for the regular AeroPress. That way you don’t need to buy new paper filters.

What’s the easiest way to push that plunger down really hard? A great big lever. 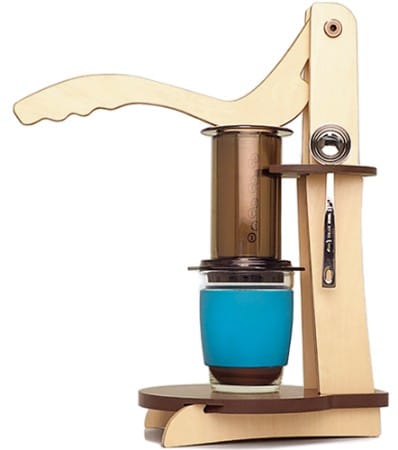 Using a lever on an Aeropress is not a new idea. There is actually a kickstarter for a small wooden lever for your Aeropress. It is called the Spressa Mezzo. It’s really quite neat. It arrives flat packed, you build it at home, and certainly at least makes it darn easy to push the plunger down.

A friend of mine jerry rigged something just like the Spressa. He happened across a pillar drill. He took the drill part out of it, popped a regular Aeropress in place of the drill, and pulled that lever arm down hard.

You know what happened? He made a coffee with a little bit of crema.

So now we have a means of at least generating more pressure in an Aeropress. We can’t forget the basics of espresso. The ground coffee needs to be compacted, tamped.

Casey Faris has a great technique to tamp down coffee in an Aeropress using two Aeropress filters. He didn’t use a contraption to push the plunger down really hard though. Check out how he did it below. 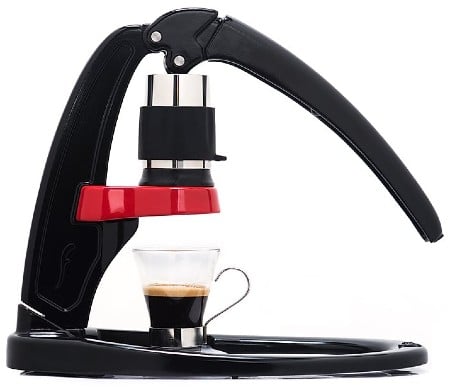 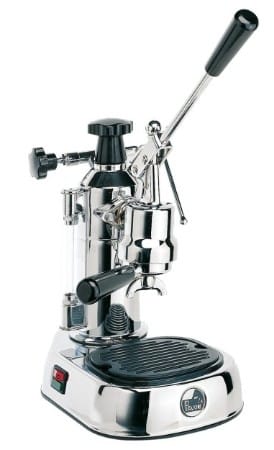 This is sounding too familiar. I’ve definitely heard of this before.

This is a type of espresso machine which you can still get today. Some people even prefer them because the entire extraction is in the user’s control.

Just take a look at them. Aren’t they just exactly what you would get if you built an AeroPress into a great big lever-arm mechanism? I feel like we’ve arrived back at the beginning of the Espresso world.

Maybe this is a little hypothetical, but also not at all. Pushing an Aeropress down really hard, in theory, does produce higher pressures. We also know it does work because that is exactly how old-school manual espresso machines work.

So, can you make espresso with an AeroPress? Well, kind of, yes.