French Press Bloom – What Is it, How To Do It, and Should You do it?

I read about the coffee bloom in one of the books in my small coffee library, it said more or less to soak the grounds for 30-45 seconds to allow the coffee to off-gas any carbon dioxide which gets rid of some of the nastier flavors and allows a full extraction to use in all coffee methods.

But at the end of the same book in their french press method, they don’t say to use a bloom…

So I did some research to see if a french press/cafetière bloom is really necessary. And boy what a mixed bag of results! I’ll go into more detail about the different opinions but you can and probably should allow coffee in a french press to bloom for about 30 seconds as part of the 4-minute brew, but as long as you stir it while it’s brewing you can get away without the bloom.

It’s the usual case, if you like it use it, if you don’t like it then don’t use it. But let’s take a look at the different opinions and find out how to bloom coffee in a french press. 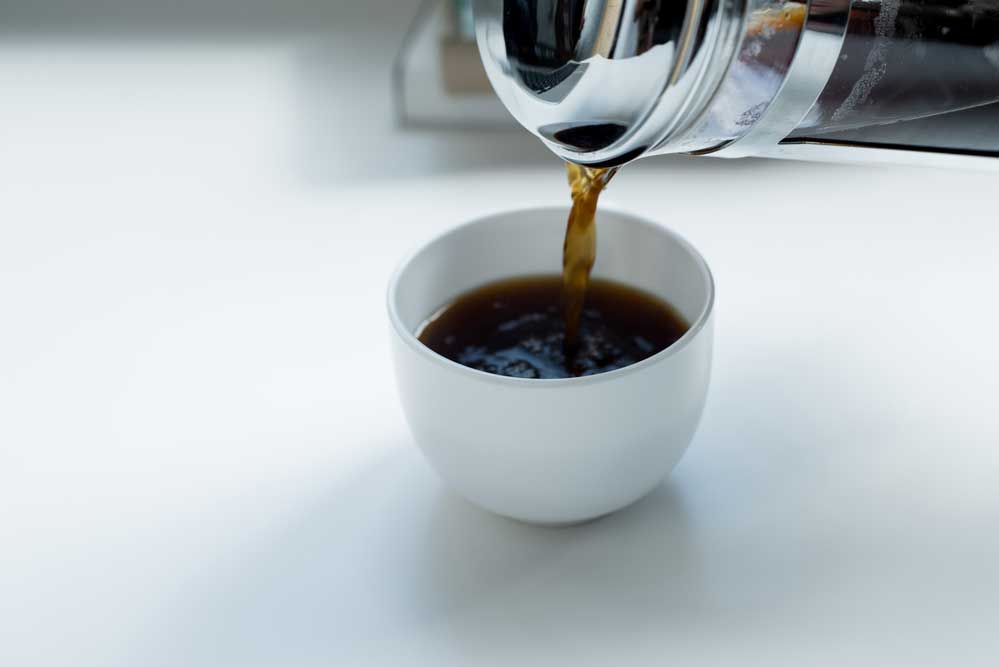 Reasons Not To Bloom A French Press

Some people were telling me bloom is only for pour-over coffee and that fully immersed coffee, like a french press, doesn’t need bloomed. The reason is that the carbon dioxide repels water from the coffee resulting in a weaker extraction when pouring over. And the carbon dioxide is what we’re removing in the bloom.

But in fully immersed coffee the beans are completely submerged the whole time regardless of how long you bloom so if you fill it all the way the carbon dioxide will still escape and then the coffee will brew as normal.

This is a pretty compelling case and has made me wonder if the bloom improved my cup or I just placebo’d myself because I thought it would work, hmmm…

The other argument is that in a french press you need to stir the coffee, or do what is called “breaking the crust” where the grounds all float on the top and you press your spoon through them to resubmerge.

A stir at the start and a stir about halfway through seem to be the go-to but everyone has their own methods and I don’t think it’s too important when you stir, so long as you are stirring to completely soak the ground coffee. Otherwise, some floats on top and the water doesn’t touch it until the end when there won’t be enough time to get the flavor out.

Reasons To Bloom A French Press

The main argument for blooming the coffee that people use is that they already do it and they like the coffee at the end. Which is all that we’re really looking for at the end of the day right? An Above Average Coffee?

So to me, you should give coffee bloom a chance next time you use your cafetiere and see what you think, the worst thing that happens is your coffee is 10% worse than normal and you can immediately make another without a bloom, so have an experiment and see.

I personally bloom my coffee in my french press but that’s partly because I like the ritual rather than the flavor at the end, this is pretty early in my coffee journey so I couldn’t explain the differences between two good cups anyway.

The one trap I fell into however is blooming the coffee AND THEN starting the timer, don’t do this, you want to start the timer as soon as water hits the beans for the 4-5 minutes depending on your preferences. Or hit the timer then start pouring so you look what you’re doing and don’t accidentally pour water over your hand…

How To Bloom Coffee in a French Press

If you’re making good french press coffee I assume you’re already using a timer and a scale. If you aren’t, you want to be, it’s the easiest way to improve your coffee.

This is the method I follow to allow the coffee in my french press to bloom.

Step 1. Weigh out coffee. I use 15g of coffee in a single-serve french press for myself. You use as much as you need but it’s important to know the weight of how much coffee you’ve used.

Immediately after you’ve started the timer you want to add in double the weight of the coffee in water, so zero the scale and add in 30g of water in this case.

Step 3. Wait 30 seconds. You can bloom for anywhere between 30 seconds and 45 seconds, I like 30 seconds but I need to do more experiments comparing the two I have to admit, 30 seconds is just a nice easy round amount so I stick with that.

Step 4. Add more water and stir. Next you’re going to add the rest of your water and stir, I go for a 1:15 ratio and add a total of 225g of water including the initial 30g. After that, make as normal.

Just make sure the water is in there and stir as you feel is right, it’s not going to make a huge difference and if you’re new to coffee you’re probably not going to be able to taste any differences because they will be subtle beyond recognition.

How do you know if the bloom worked? Well it can be quite hard to tell, because you should see the off-gassing appear in a foam or bubbles escaping on top. The video below is the most extreme example I’ve ever seen of this, it’s done with home-roasted coffee as fresh as it comes.

But when I first did a bloom nothing much seemed to happen, there was a tiny amount of foam I think but I honestly couldn’t tell. But in doing research for this article I found a video comparing bloom with hard water and soft water.

Soft water created very little visible bloom while hard water does the opposite with a large bloom appearing in the glass carafe. My water is very soft so that explained it, I was worried because the other reason there is no bloom can be that your coffee is stale, but this was bought fresh from a roasters and roasted the previous day.

Therefore, if you don’t see a bloom don’t worry it’s still happening it’s just not as visible a reaction.

What is Coffee Bloom anyway and What Does it Do?

Just to clear this up, I touched on it but want to make it clear on the two things a coffee bloom actually does.

This is the reason for it, carbon dioxide gets into the beans during the roasting and can leave a bitter taste to the beans after they’re brewed. The release starts from the moment the grind happens and is sped up by adding water to the grounds, but you just add a little to allow the carbon dioxide to escape better.

Important in pour-over coffee because the water doesn’t get as long touching the grounds but less important because of the immersion in a cafetiere.

The carbon dioxide repels water so blooming and releasing it allows more water to come into contact with the coffee itself so that it saturates properly and starts transferring all it’s flavor and oils into the water for the cup of coffee as you know it.

And a better extraction, in theory, allows for a better cup of coffee, more flavor will be extracted and you’ll be left with a better balanced cup at the end of it.

Should You Bloom in a French Press Cold Brew?

It’s up to you! You can do a hot bloom in a cold brew and again it should improve it by better releasing the carbon dioxide with hot water before the cold gets added but it’s up to you. It’s something you’ll want to experiment with yourself so you can find out if it works and if you like it.

The weather with me is only just getting warm enough for cold brew so I’ll need to experiment myself and update you.

Why is french press coffee bad for you?

One of the weirder things I’ve ever heard, it’s based on the fact a french press uses a metal filter that doesn’t filter out cafestol which can cause your bad cholesterol to rise. But you know how much you need to drink? 5-8 cups a day…

That is a substantial amount, and notice the wording “may actually…” not that it will, not that it’s bad for you. It’s simply a small scientific comment that has been blown out of proportion and turned in to clickbait. Unless you are having problems with your cholesterol I wouldn’t worry, and even then I’d talk to your doctor first.

Are cafetieres and french presses different?

Nope, two words for the same thing, they are also sometimes called press pots. I wonder if it changed from the french word cafetieres, to “the french sounding press coffee maker thing”. Probably not but it’s fun to imagine.

Does french press have more caffeine?

Wow, that was an eye opener, I’m definitely less convinced by using a bloom in a french press, it seems like the whole thing is a coffee bloom and stirring it will do more good than a bloom will.

But it’s up to you, don’t get too hung up on the details and just try it out, after all, you can make your coffee your way so try all the different methods until you find the one you like.