Absolute Beginners Guide to Cold Brewing Coffee Like A Pro

Cold brew coffee has become massively popular worldwide but it is still nothing short of an enigma to some. It does sound strange when you first hear of it. Coffee has always been a warm drink. Well there is iced tea, it’s delicious, so now it’s time for iced coffee to shine.

Cold brew coffee can be wonderfully refreshing on a warm summers day. Making a batch is not rocket science. All it takes is a little forward planning to leave some brewing overnight. You don’t even need any special kit. Read on and I’ll show you how easy it is to make a cold brew coffee! 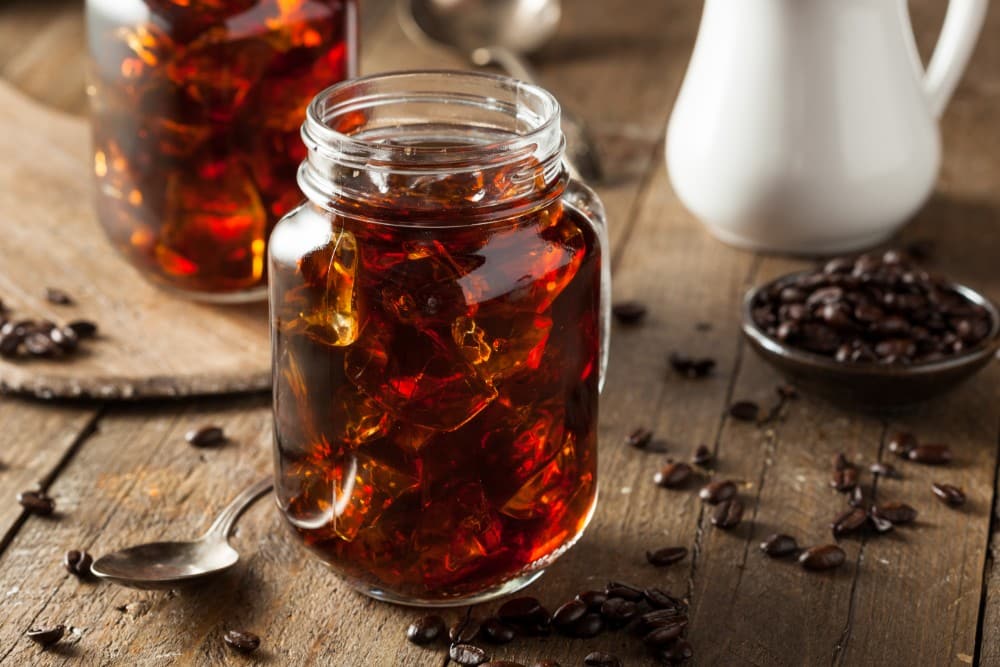 Why Should I Brew My Coffee Cold?

If you are someone who has always brewed coffee the same old way, give me a chance to convince you.

Cold brew coffee is without a doubt the easiest way to make coffee. You don’t need any kind of special coffee equipment at all. Making it especially perfect if you are brewing on a budget.

All a cold brew needs to become brilliant is time. You can throw it together, leave it overnight, and you have it crisp and fresh ready for the next day.

Cold brew fans love their coffee this way so much because it creates such a smooth, mellow, and well-rounded flavor. Because it is immersed in cold water it gives a really consistent flavor between batches which is always low in acidity.

The low acidity makes it an especially good choice if you have a sensitive stomach.

If you’re someone who is committed to the rich dark aroma of an espresso, then cold brew might not be for you. If you like a smooth, sweet, and mellow mug of bean juice then this is right up your alley!

How To Make The Perfect Cold Brew Coffee

Before you go about making your cold brew, there is one thing you need to know. A freshly brewed batch of cold brew is not what you drink in the end.

Cold brew is usually made as a concentrate. When you serve this stuff, you will probably want to dilute it by mixing it with as much as an equal amount of water. You could dilute it with milk, if you like, or both milk and water. Go nuts!

What Equipment Do I Need?

The thing with cold brew is you really don’t need any special equipment. All you need is something to brew it in, something to separate the ground beans once it’s finished brewing, coffee, water, and a cold place.

There are lots of ways to make a nice cold cup of mud. Sounds tasty right?
You can opt for a completely DIY route, but if you just love to have special kit, there are options out there for you choose from.

What Is The Best Kind Of Coffee Bean for Cold Brew?

People can be very particular about the coffee bean they choose for regular brewing methods never mind cold brew. There are so many different factors that go into creating every different coffee bean’s unique flavor. Aspects such as:

When it comes down to it, most people look to the roast for deciding which beans to use. The thinking is along the lines of; there is less heat (but more time) for the flavors to diffuse out the bean so a darker roast is usually wanted to give more potential flavour for diffusing into the water.

A darker roast is probably the most common choice, particularly at coffee shops, but there really are no rules to coffee. If you think you would like a lighter roast then by all means try it out! It’ll certainly give a fruitier tang.

Some might say that the grind is the most important aspect to preparing your cold brew.

In terms of the ideal grind size for cold brew? Coarse. Go as coarse as you can. It should look like ground peppercorns when you’re done.

Can I just use Pre-Ground Coffee?

Of course you can use pre-ground coffee! Especially if you don’t actually have a coffee grinder. I’m talking about the ideal situation here for cold brew.

Pre-ground coffee tends to be more of a medium grind. So you will want to go for a bit of a shorter brew time to compensate.

What Is The Best Cold Brew Water to Coffee Ratio?

The ideal water to coffee ratio for cold brew is a strange area of debate. You will almost certainly get different answers depending on who you ask.

Here are some of the different ratios that people throw around:

What do these different ratios tell us? There is no hard and fast rule. Coffee is in that strange balance between art and science. You’ve really gotta feel you way around with it

As a great ratio to start at, I recommend going with the 7:1 ratio. It is a comfortable middle ground. You’re less likely to be loading in silly amounts of beans as you would with a 4:1 ratio. If it really is too weak for you at 7:1, only then try moving toward 4:1. It’s more likely you will want to dilute the brew once you’re finished though!

How Long To Steep Cold Brew

Some people will say that you need to steep your beans for 12, 18, or even 24 hours. We know that things like your roast and grind size affect how the flavors will extract. So it’s no leap of faith to know the amount of time to let it steep is really just down to you.

Most of your flavor will be extracted in the first 4-8 hours. By then most of the caffeine you can extract has been extracted. It won’t get any more potent caffeine-wise.

After 8 hours you are extracting the more subtle flavors. This is the point in time where the flavor is becoming lovely and rounded. After 8 hours the flavor won’t really become much stronger as such, if you want a stronger taste you need to add more beans.

With a typical hot brew, longer brew times will usually give you the harsher, bitter, flavors. That’s not the case with cold brew. The harsher tastes really need heat to dissolve, so you’re avoiding bitterness, and allowing more delicate flavors to “come loose” from the beans.

So as an absolute minimum, you want to be leaving your coffee to soak for at least 8 hours. After that, the typical bench marks people go to are the 12, 18, or 24 hour marks. Personally, I’ve found that 18-24 hours seems to be the sweet spot range. After that you really are facing the law of diminishing return.

If you planned ahead and stuffed you grounds into some kind of coffee sock or wrapped them in cheese cloth, you can just pull that out and you’re done!

Did you opt for using a French press? Just push that plunger and you’re all set! You might find that a French Press doesn’t filter as well as you would like though. One fix might be to pour your brew through a filter.

Did you just dump those grounds in a jar? Well now you have the fun task of filtering that out. You can get creative here with something like a funnel stuffed with filter paper or cloth, but I have a V60 so I find it easy to just pour my joe through that.

Did you splash out and buy special cold brew kit? It does the filtering for you.

Other Ways To Have Your Cold Brew

Firstly, what even is the coffee bloom?

When you first pour water on your coffee grounds and little bubbles appear. That is the bloom. It is caused by coffee giving off carbon dioxide when it first begins to brew

By first pouring a little bit of hot water over your coffee grounds and letting it bloom supposedly helps the flavor. You then pour in your cold water and let it do its thing. 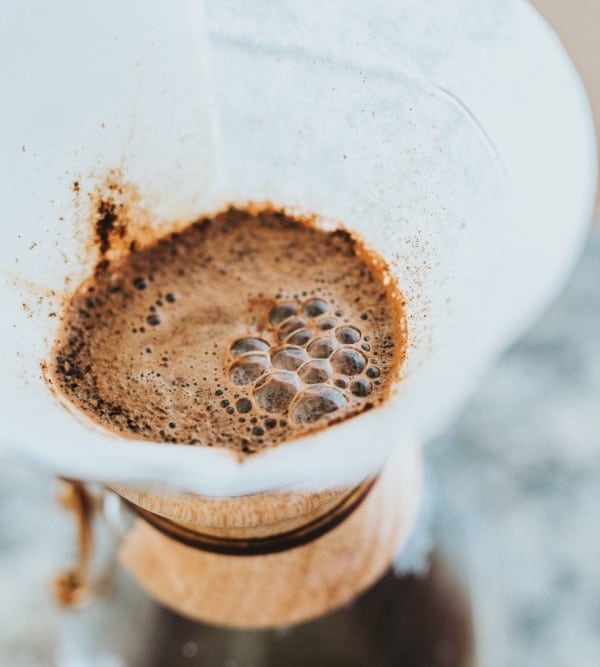 Believe it or not, you get coffee infused with nitrogen. Nitrogen cold brew coffee is also called NCB for short. The nitrogen gives the coffee a rich creamy head like draft beer.

NCB is awesome. If you ever see it at a coffee shop, or sometimes even a bar, then try some!

You might expect that you need expensive kit to make nitro cold brew, but you can use a cream whipper if you happen to have one kicking around the house! 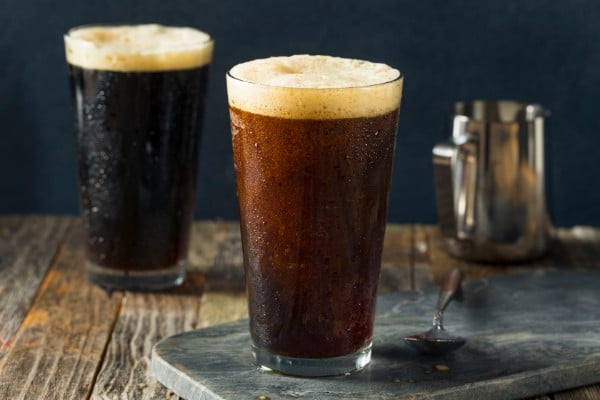 Be Sure All Your Grounds Are Saturated

Really, make sure all your grounds are completely soaked to get all of that yummy goodness out of the beans. Give it a shake and a stir sometimes throughout brewing to make sure the settled grounds get a better chance to extract their flavor.

I did touch on this before, but if you have a French Press at home, this might be the easiest way to make your cold brew. It filters the grounds by design! The only downside is it might not filter the grounds out perfectly. Beware of the gritty cold brew!

How Long Does Cold Brew Last After Making It?

You have at least 7 days to drink your cold brew. It probably won’t last longer than 10 days. That’ll give you plenty of time.

If it starts to taste off, then it’s gone off. It doesn’t have to go to waste though. Plants which like slightly acidic soil will like it. Just make sure you dilute it down.

Do I need To Keep Cold Brew Refrigerated?

It’s called cold brew after all. The idea is to drink it cold. If you don’t keep it in the fridge it won’t last as long before it goes off.

Once it is brewed be sure to whack it straight in the fridge though. It’s best drunk on ice.

Can You Steep Cold Brew For Too Long?

You can absolutely leave your brew for over 24 hours, and easily as long as 36 hours.

As with regular hot brewing, you can eventually over extract your coffee. After 48 hours you will start to get sour and musty flavors developing. So best not give it as long as that. Call 36 hours your safe maximum.

Can I Use Decaf Coffee Beans To Make Cold Brew?