This is something I’ve been experimenting with over the weekend and the perfect next blog in this French Press series. I’ve figured out how to make french press foam and how you can use it to make yourself a faux-ccino, it’s not quite a cappuccino but it is pretty damn good all the same.

French Press foam is made by half filling your french press with warm milk and pushing the plunger up and down for 1.5 minutes to push air through the milk giving you a nice foamy milk that you can pour over coffee or hot chocolate.

That’s the basics of it, I did this and made a chai latte using instant powder I had and I’ve combined it with strong coffee made in my drip coffee machine to make fauxccinos for my wife and I in the morning.

I was genuinely really impressed when I tried it, I didn’t think it would work as well as it did so I highly recommend trying it out at home. But before you do let’s go through the steps.

How To Foam Milk in a French Press 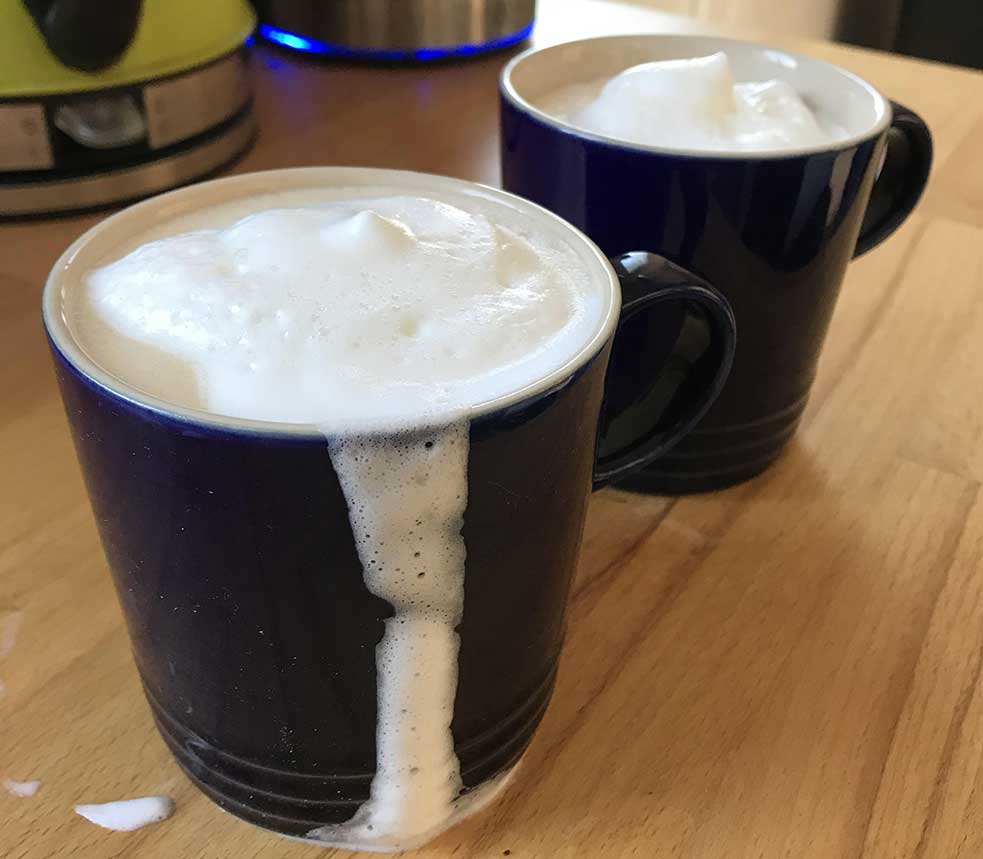 There are three main steps to this if you want to do it right without making a huge mess.

Step 1. Measure Your Milk to no more than half fill the French press

The milk will double in volume by the time you’ve finished plunging it, so if you overfill the French press, as I did, it will expand and pour all over your counter. It doesn’t ruin it but you waste a load of milk and have to clean it up after.

I use about 10fl oz for 2 mugs of coffee or hot cocoa, but it depends how big your mugs are.

You also can’t underfill it because the plunger has to be able to reach into the milk to push the air through and some have a big gap at the bottom for coffee grounds.

Step 2. Warm The Milk Until It’s Hot Not Boiled

You can very easily overheat milk so it doesn’t taste good and gets a skin on top. You need to go gradual, I did two rounds in my 750w Microwave at 1 minute for the 10 fl oz of milk. If you’re using a stove or different amounts, just don’t overdo it, heat it up as you would to make hot cocoa.

You need to heat up the milk otherwise it’s going to give you a cold coffee at the end. You don’t need to heat it for the froth to appear but it’s not going to be a nice drink if it’s cold.

I’ve tried a few different lengths of time and if you plunge less than that then it doesn’t get frothy enough and it just sort of dissolved in your coffee. More than that and it turns into all foam and no milk to mix with the coffee.

And I assume if you just kept going you’d eventually be churning milk and end up with butter, but your wrist is bound to get tired before then!

And voila, you’ve got yourself foamed milk read to add to whatever you’re making. As I said my first attempt I stirred in some instant chai powder and it was superb.

How To Make A Cappuccino in a French Press

I give it a solid 6/10 in terms of a cappuccino, but 9/10 in terms of delicious at home coffee. I’ve definitely paid a cafe to make me a worse cappuccino and the taste is more similar to a pod machine cappuccino because they are also water based rather than actual espresso.

You’ve got less coffee in your cup and it’s much more water down with the milk, and you don’t want too much water in it or it will taste like a watery cappuccino. It will taste a little more water anyway because it’s made with filter coffee rather than espresso which is much more concentrated.

But we can recreate that by using 1.5x the normal amount of coffee, I normally put 2 scoops in and fill to the 4 mug mark so in this case I put in 3 scoops and fill to the same level.

You can brew it in your french press first and then quickly clean it before you make the milk but if you have two ways to make coffee I’d do that so that everything stays nice and hot.

It depends how you like your coffee, half filled gives you more of just a coffee with milk with foam on top while a third feels more like a cappuccino because there’s so much milk in it.

A third is the sweet spot for me but try it out yourself and see what you like, this is just a fun thing more than the absolute best way to enjoy your coffee, a nice treat and a way to show off.

Step 3. Pour Over The Frothed Milk Spooning on the Foam

Lattes and cappuccinos both involve different methods of pouring, but in our case we just pour it in. If you’re filling two cups do some in each as you go so you get the same balance of foam to milk. Then when they’re almost full use a spoon to scrape any of the extra foam onto the top of your mug.

Take a teaspoon of cocoa powder and gently tap the side over your mug for that chocolate finish. It’s what makes it look the best and is certainly the most fun part, it makes it feel like a proper cafe and just sets it off nicely.

But the problem with these is that you need to be able to grind your own coffee down to a fine powder, if you don’t have a grinder then you’re going to be stuck.

I used pre ground coffee in my drip coffee machine, so keep it strong and keep it with less water.

>
Can You Foam Non-Dairy Milk in a French Press?

Yes, if you want to use almond milk, oat milk, hemp milk, any milk you want it’s the same process.

But, it doesn’t work quite as well, it’s to do with the fats inside and how they foam, they don’t foam as well as the long and short of it so you can bear this in mind and accept your results will be different.

Why Cappuccinos are Better than Lattes in a French Press

You aren’t actually steaming the milk so the milk made in a French press doesn’t have the same consistency.

But you can make cappuccino because the foam is very similar and this is the essence, you even get the foam mustache after you’ve taken your first mouthful.

But a latte doesn’t have the foam, so if you frothed the milk and poured it in keeping the foam out it tastes slightly thicker than a normal coffee with milk but it’s just not the same. You just feel like you’re drinking a very milky coffee.

But again, it’s not bad considering you’re at home and you don’t need to pay for an expensive machine that actually steams the milk, and I’ve even seen some people make Latte art using a french press so it can be done.

Can you Make Latte Art with A French Press?

You can indeed, but what you need for this is the metal jug you see baristas using, this has a sharper spout than your french press does and it’s that precision pouring you need to make latte art.

It’s easiest to see if you use a latte glass but it’s the exact same process, you froth up your milk using the french press, pour it into the metal jug and then away you go. We hope to get to some latte art content here on the blog so stay tuned.

The key points to this are you want to froth it enough to give you a really creamy coffee and you want to make coffee strong enough that flavor still comes through over the milk.

Also you only want to half fill the French press at most so coffee doesn’t come flying out and end up all over your counter. Because it happens…

We Have affiliate relationships with sites such as Amazon. If you click over to them from our site and buy something we may receive a commission at no extra cost to you.

Any cookies that may not be particularly necessary for the website to function and is used specifically to collect user personal data via analytics, ads, other embedded contents are termed as non-necessary cookies. It is mandatory to procure user consent prior to running these cookies on your website.