Can You Add Milk Directly to a French Press?

You can add milk directly into the french press after it’s finished brewing but before you push the plunger down. But it doesn’t make the process any easier and doesn’t save any time compared to adding milk to your coffee in the cup.

If you’re wondering if you can brew coffee in hot milk in a french press save yourself the trouble and don’t do it. I’ll go into the details below but the long and short is it just doesn’t work.

Finally if you’re looking to make french press cappuccinos then read on.

How To Add Milk Directly To A French Press 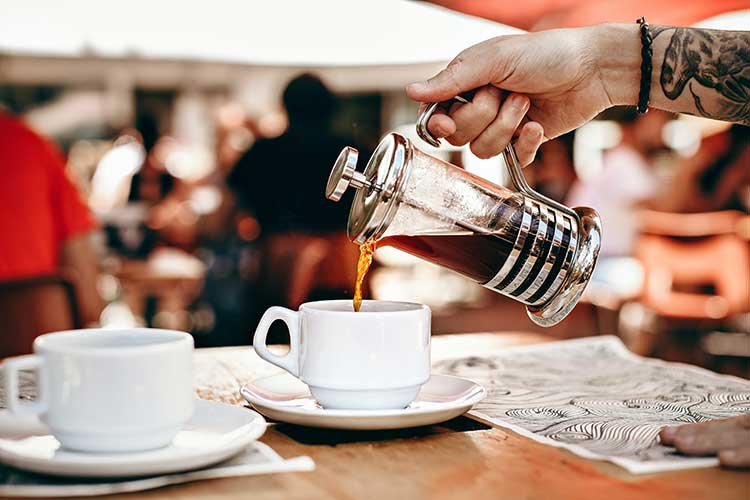 The best way to add milk to a french press is to add it at the end before you plunge down. Brew for your 4-5 minutes, break the crust and pour in your splash of milk, leave it a few seconds then plunge down as normal.

Don’t stir after you’ve added the milk, this will unsettle all the grounds and leave you with a much “bittier” cup than normal.

But even this isn’t the best way to enjoy milk in your french press coffee. The milk can catch a lot of the fines that are normal in a french press and cause even more of them to get into your cup.

The fats in the milk can also get caught easier in the mesh filter which doesn’t affect your cup of coffee but it means you need an even more thorough clean of the press at the end because these fat molecules can spoil and go mouldy leaving you with a sour cup of coffee.

All of this is to say that you’re better off pouring out your coffee into your cup and then adding milk, as you would normally with coffee.

If you add your coffee grounds, your milk and then the water you’re just readying yourself for a disaster. This is going to ruin not only the temperature you need to extract all the coffee effectively, but it’s also going to ruin your ratio of grounds to water that you need to make your coffee just right.

French press coffee is surprisingly delicate, you need to make it just right to really get the best flavor from it and weighing out the coffee and the water is part of that. If you splash some milk in there at the beginning of that you’re going to throw the whole thing of balance.

But what’s strange, is I bought the Bodum travel press (which I reviewed here) and it suggests putting milk straight into the grounds and then screwing the lid on…

So you can do it, but I think this is a concession on their part to make it more accessible, they aren’t going to write on the box “If you take milk or cream in your coffee don’t buy this, you will ruin your coffee.” you know?

So again you can, nothing bad will happen, but you certainly won’t make an above average cup of coffee in the end.

Brewing Coffee in Milk In A French Press

Measure out your coffee grounds, boil your milk, add it to the grounds, leave it for 4 minutes, stir, plunge, drink, gag at the disgusting weak coffee burnt milk combination you’ve made…

No, boiling your milk is not a good idea, and the temperature needed to brew coffee is a good 30F higher so it’s just not going to work.

Not to mention the fact that milk is denser than water and that affects how your coffee acts while it’s brewing, namely it will sink faster and pile at the bottom stopping the brew process before it’s ready.

There is a possibility that you could make cold brew straight into milk, since it sits for so long at cold temperatures anyway. But…

I just don’t want to go to the effort and have wasted 12 hours waiting, a pint of milk and some coffee grounds when I could make cold brew and add milk after. Or make iced coffee.

But if it’s a cappuccino you want then read on.

I’ve written a longer article on this which you can read here but I’ll take you through the basics here.

Step 2. While your coffee is brewing you’re going to heat enough milk to half fill your french press, warm it so it’s hot but not boiling so it doesn’t scald and have the flavor changed.

Step 3. Pour out your coffee to half fill your mug and then quickly clean out and dry your french press.

Step 4. Add the milk into the carafe and start plunging! It’s going to expand because air is getting pushed through it which is why we only half fill it. Plunge for about 15-30 seconds moving all the way through the milk and hey presto you’re going to have yourself nice foamy milk for your cappuccino!

Step 5. Pour in the milk to your coffee and enjoy the foamy milky goodness. It won’t taste or feel exactly like steamed milk but for how cheap and easy it is it’s a pretty good substitute. It also gives you a milky coffee rather than coffee flavored milk.

You’re better off making your french press coffee and then adding milk in the traditional fashion rather than trying to complicate things by adding it during the brewing stage.

But if you haven’t tried foaming milk to make faux-cappuccinos then you should give it a go. It’s pretty fun and tastes surprisingly good!