It’s something most coffee lovers have eyed on their coffee shop menus. We all expect the regulars: espresso, cappuccino, americano, latte. There’s a new player in that list and it’s been finding its way into coffee shops worldwide. You guessed it, it’s the Flat White.

What is a Flat White? Is it like a Latte? 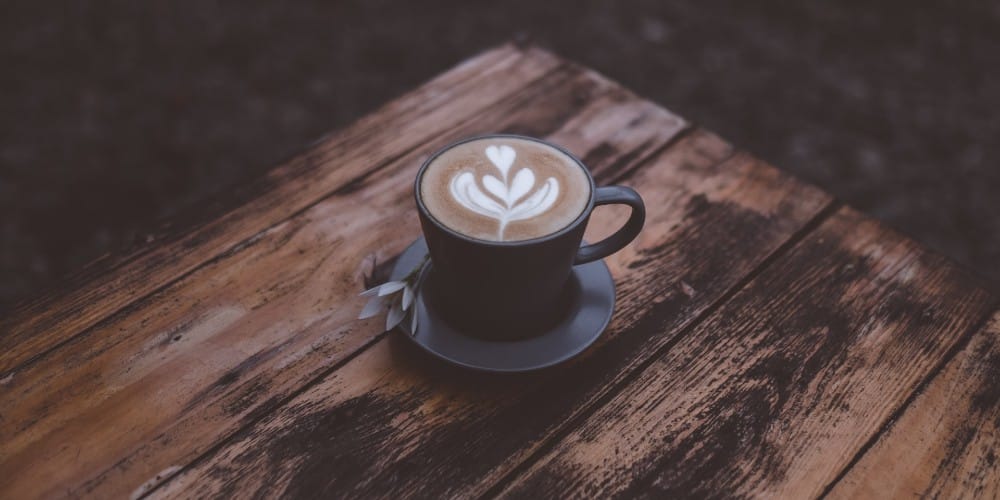 What Is A Latte?

A latte is one of the most famous and popular espresso-based coffee drinks in the world. For good reason too, they are delicious.

In Italy, a latte is usually considered more of a breakfast coffee. You might get odd looks if you order a latte in the afternoon.

The standard latte can be made with any number of espresso shots. It depends how big you want your latte.

The milk is steamed, with a lovely layer of airy froth, about 5mm thick, to top it off.

The Origins of the Latte

Coffee and milk have been served together ever since coffee first became popular in mainland Europe in the 17th century. They were still a known pair before then in Africa and the Middle East, although coffee history does get a little foggy that far back.

In Italy, “Latte” just means “milk”. The Latte we all know and love is known as a “Cafe Latte” in Italy.

In German, it is known as a Milchkaffe. In Spanish, it is a Cafe con Leche.

The Latte is a drink that has developed over the ages. While it certainly didn’t begin as a frothy mass of loveliness, it’s basic self has been present around the world for centuries.

What Is A Flat White?

The flat white is a relatively new espresso-based coffee, and it is taking the world by storm.

It is the “no fuss, keep it simple” espresso-based coffee; for people who like milk with their espresso, but don’t need the frothy frills.

While it maintains a persona of simplicity, there is still a rare minority who interpret it as a little pretentious. Purely because it is new and a bit different; a little hipster.

Well, it is similar. There’s no double about that.

The difference is mainly in the milk. The milk is steamed with a super-thin, “microfoamed”, layer of super tiny bubbles. It’s these bubbles that give a flat white a much more glossy and velvety texture than a Latte.

Moreso, a flat white is served in a smaller cup than a latte. There is more coffee for the amount of milk you have. The Flat White doesn’t feature the milk, instead the milk compliments the Espresso with a sweet and creamy texture, leaving the rich coffee flavors and aroma much more heightened.

The Origins Of The Flat White

The flat white was born sometime in the 1980s, although the jury is out on whether it first came to life in Australia or New Zealand. Naturally, both countries would love to claim the title of Flat White Creator. In truth, it likely developed in both at the same time because coffee isn’t bound to any single country.

Coffee drinkers transitioning from instant coffee with milk over to espresso-based drinks wanted something familiar. Apparently the cappuccino was just too “out there”, but it’s created something wonderful.

They asked for their cappuccinos “flat”.

Over time the milk has evolved from making it more than just a flat cappuccino to a lovely microfoam textured milk which gives the flat white its signature milky magic.

Flat White vs Latte: The Differences

To the untrained eye, a Flat White and a Latte look identical. As always, the devil is in the details.

The Milk Makes It

This is really the key to the flat white. No other espresso-based drink has its milk quite like it.

A latte is served with steamed milk with a layer of frothed milk on top. The Froth is usually about 5mm thick. Not a huge amount of froth, but it’s still very present.

A flat white is served with just steamed milk. No froth on top. No fuss.

The steamed milk in a flat white is a little more than just steamed milk though. It is “microfoamed” milk, which is milk with a thin top layer of tiny air bubbles. This is something that can only really be achieved with steam.

These tiny little air bubbles are what give the flat white its signature velvety, glossy, texture.

Size Matters, But It Also Doesn’t

Different places and people have different opinions on what the volume of a latte and a flat white should be.

I’ve seen some places saying a latte should be served in a 240ml cup and a flat white in a 160ml cup. Elsewhere I’ve seen 200ml and 180ml for a latte and flat white, respectively.

Cafe Nero seems to be thinking along similar lines at 240ml for their flat white. Although they only offer a latte in two sizes: regular (340ml), and grande (454ml).

Both Starbuck and Cafe Nero like to use Ristretto shots in their flat whites, rather than espresso shots. To learn more about the difference between a Ristretto and an Espresso, check out our article on exactly that.

Wherever you go, you are guaranteed to find a different opinion on what size a flat white should be.

What flat white sizes do have in common across the board are:

Whereas when it comes to latte sizes, there is really no rule. Go crazy.

How To Make A Flat White

First thing’s first. You need an espresso machine to make a Flat White or at least some way to steam milk. While you can easily froth milk at home, you need, well, steam to make steamed milk; and that’s exactly what goes into a Flat White.

Secondly, since there is no hard and fast rule to what size a Flat White is, you can pretty much decide how big you want it. Only one thing, usually part of the idea of a Flat White is to not drown the Espresso in milk. A Flat White is usually quite a small drink.

We’re going to talk about using a 6 oz cup here, so if you’re using something larger, just make up the difference in milk.

First, preheat your cup. It’s a small drink and it can lose heat quickly.

Second, you will need to whip up a double Espresso shot. You don’t necessarily need to use an espresso machine for that, you could use a Moka Pot.

For a full guide on making Espresso with your espresso machine, check out our article.

You can opt to use a Ristretto, like many coffee shops. For a full guide on how to make Ristretto and what exactly it is, check out our article.

Third, it’s time to prepare the signature component; the steamed milk. Move on over to the steam wand on your espresso machine and let’s begin.

If you’ve nailed it, the milk will have a uniform consistency similar to thick paint, no large bubbles, and a shiny surface.

Lastly, it’s time to pour your steamed milk into your double Espresso or Ristretto.

Pour the milk into the center of the cup, and gently raise the height you pour the pitcher from. The extra height will encourage the espresso and milk to mix. If you’ve got the skills, you have the chance to pour some Flat White art into the surface.

Flat White vs Latte: Which Is Best?

Both a Flat White and Latte are Espresso drinks.

While the actual cup volume for a Flat White is in disarray, it’s at least agreed that it is smaller than a Latte.

The milk in a Latte is in two layers, there is steamed milk underneath, with about 5mm of airy foam on top. The Flat White is just steamed milk, nothing fancy, no airy frothy foam.

Because the Flat White has less milk, it tastes stronger than a Latte, but the overall caffeine content is the same because they both use two shots of Espresso. Or two Ristretto shots, each to their own.

Which one is best? Well, of course, that’s down to you to decide! Next time you’re in a coffee shop, try one of each.

If you’re really trying to make up your mind, and if the coffee shop is quiet, it might be fun to ask your friendly barista how they make their Flat Whites and Lattes. Everyone makes them slightly different.

Frappe vs Frappuccino – The 8 Differences Explained

White Coffee vs Black Coffee (What’s the Difference? It’s Not What You Think)

Why Is Espresso Served With Lemon? (It’s Really Not Why You Think)

29 Common Coffee Names (And What They Are)