Frappe vs Frappuccino – The 8 Differences Explained

If you go into any coffee shop that sells a blended foamy iced coffee drink you can order either a frappuccino or a frappe and they’ll probably know what you mean.

But what actually are the differences?

The difference between a frappe and a frappuccino is that a frappuccino is a Starbucks trademark and so only they are allowed to sell them. The word Frappe is used more generally to mean a blended foamy iced coffee drink.

So if you’re drinking a frappuccino you’ve been to a Starbucks, if you haven’t then the cafe you bought from better gear up for a lawsuit!

And Frappes were made most popular by Mcdonalds as their equivalent drink but can be served anywhere in any combination. Sweet, with coffee, without coffee, but they are always blended and milky.

But let’s take a look specifically at the McDonalds Starbucks differences before getting into the rest. 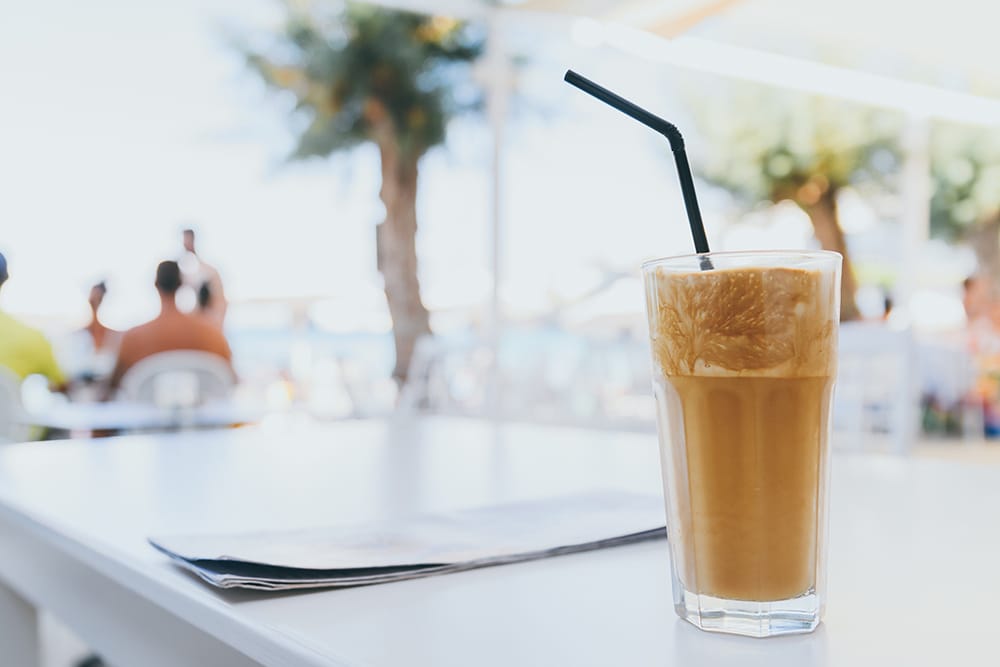 I think this is the most common question in the Frappe vs Frappuccino debate, what are the differences between McDonald’s Frappes and Starbucks Frappuccinos?

I dug into it a little and discovered there are no real differences between a mcdonalds frappe and a Starbucks Frappuccino apart from the name. They’ve got different flavors available, and I’m sure they’re made every so slightly differently to avoid any trademark dispute but ultimately they are the same drink.

I think the main difference is you can get a Frappuccino with no coffee and all Frappes have coffee in them. And there are also more choices of Frappuccino available.

Mcdonalds are also cheaper and they taste just as good in my opinion.

Differences Between Frappe and Frappuccino

1. Frappe Was Born In Greece

The original Frappe was actually created in Greece in the 1950s by a researcher who was being paid by Nescafe to come up with new beverages.

The original frappe blended together water with instant coffee, ice and a splash of milk until it became foamy and was then served with a straw because the foam on top tasted quite bitter.

It was created because someone was looking for a way to make an instant coffee and couldn’t find any hot water.

So I can almost guarantee you wouldn’t enjoy a traditionally made Frappe, not very sweet, very bitter and made with not very tasty instant coffee compared to espresso.

The Greece olympics in 2004 helped put this original Frappe into the minds of people around the world.

Boston is where the original Frappuccino was invented in the 90s, it was an independent chain of coffee shops calle coffee connection and the owner created the Frappuccino and added it to his menu.

This was when Starbucks were buying up every and any coffee shop that was doing a good job and they coveted the Frappuccino. THey bought them out, trademarked the name and added it to the menu of every Starbucks around the world.

But in Boston you can order a Frappe and you’ll get yourself a run of the mil milkshake, thick creamy and delicious. What’s better than that? Combine it with the espresso goodness of a Cappuccino and hey presto you’ve got yourself a frappuccino.

3. Frappes Were Traditionally Sold Without Cream

As I mentioned above the topping of a traditional frappe was made with the foam that was created in the blending process, no whipped cream was involved.

Now you’d be mad to order a frappuccino with no Cream, but I’m cream obsessed so maybe I’m the wrong person to ask…

The whipped cream is the perfect way to top it off though and gives it that look of a cappuccino that you can sprinkle cocoa powder over while still having a delicious and balanced drink.

4. Frappuccinos Were Made With Espresso

This was a wonderful change because espresso is simply so much tastier than instant coffee is. Instant coffee is fine and has its place in the world of convenience and easy coffee but it just doesn’t compare to the actual flavor you get from using espresso, even if you cover it in sugar syrups and flavorings.

BUT now Starbucks actually uses a Frappe-Roast which is a sort of stronger instant coffee they use specifically in their Frappuccinos because it’s cheaper and the texture stays more consistent. It’s better quality than standard at home instant coffee but still isn’t the best it has to be said.

But again when it’s covered in sugar you don’t really notice.

But your traditional Frappe is made with instant coffee that’s combined in the whisking process. And if you order a Frappe across Europe not from a branded coffee shop, chances are this is what you’re going to get served.

5. Frappuccinos Can Be Made Without Coffee

But not being served because it wasn’t sold there I ordered a Strawberries and Cream Frappuccino, boy oh boy was it a good time. Perfect for the side of me that didn’t like coffee at the time, chilled, sweet, refreshing, delicious.

And it’s not the only choice you have if you don’t want to have any coffee, there are loads of different sweet options that are made.

With a Frappe however you’re limited, these are always made with coffee and you’ll be hard pressed to find one that isn’t. Though I’m sure some independent coffee chain somewhere will sell you one.

6. Frappes Can Be Made With A Whisk

If you wanted to make a frappuccino at home you’re going to need a blender. The ice needs to blend to give it that thick texture.


A frappe however you can make with a whisk, whisky together coffee and cold water with any milk and sugar you want and then add ice after and you’ve got yourself a frappe.

Preferably you’ll want an electric whisk and if you don’t use enough water you’re going to accidentally make the Dalogna coffee people have been making on social media, where it stiffens and you can spoon it over milk.

7. Frappes Are Enjoyed The World Over With Different Variations

As I said, Frapuccinos are trademarked, and while they are enjoyed the world over, they can only be enjoyed in a Starbucks and only using the menu variations. No originality and no style.

Frappes however are completely free, free to be interpreted and reinterpreted any which way. For instance in Bulgaria the Frappe can be made with coca cola instead of water, which sounds disgusting I have to say…

In Denmark the coffee is whisked into milk instead of coffee, more aligned to what we know as a frappe.

And in Serbia they are made with Ice cream and whipped cream on top, I’m quite surprised that Serbia has the closest representation to what we have!

8. You Can Buy Bottles Of Frappuccino

Finally, if you go into a grocery store, supermarket, or gas station, in their refrigerators you will likely find a bottle of Starbucks Frappuccino. They are one of the only companies to offer any variation of this and in doing my research I read they have a 97% market share on refrigerated coffee beverages!

That is insane to me, but also seems true because I don’t often see any other company doing this.

How To Make a Frappe at Home

This is the Above Average Coffee way to make frappe at home.

It works best with whipped cream you get out of a can and the coffee should use an extra spoon of coffee grounds to keep that coffee flavor strong. Much more delicious than your traditional instant coffee choice and a great variation on iced coffee to enjoy on a hot day.

Does a frappuccino have coffee in it?

Some do and some don’t, as is always the way, if it’s got the word Creme in the title on the starbucks menu then it is made without coffee, the rest of the menu you can assume that yes it does in fact have coffee in it.

Nope, frappes are never hot, they are always served ice cold because they are made by blending ice.

What is the difference between Latte and Frappe?

If you wanted to know the difference from McDonalds to Starbucks then I’m afraid there’s not a lot to tell you. It’s pretty much just legal jargon that separates the two, they both follow the same basic formula andany difference is so minor in my mind that it’s not worth talking about.

But if you were interested in the traditional Frappe then I hope you learned something. I know I did in writing this article!

Why Is Espresso Served With Lemon? (It’s Really Not Why You Think)

White Coffee vs Black Coffee (What’s the Difference? It’s Not What You Think)