French presses come in all sorts of different sizes, and advice can be a bit vague about how much coffee you should use per cup. And for that matter, how big is a cup of coffee?

Some French presses class 4 oz as a single cup but this is bananas to me, I’d just be getting into a cup of coffee as it was finished with a coffee that small.

I’m also not a big fan of the tablespoon method because it isn’t entirely accurate, you don’t get good repeatability and as a result your coffee never tastes the same twice.

But I know some people just want it nice and easy so stick with 2 tablespoons per cup.

How Does The Coffee Ratio Work? 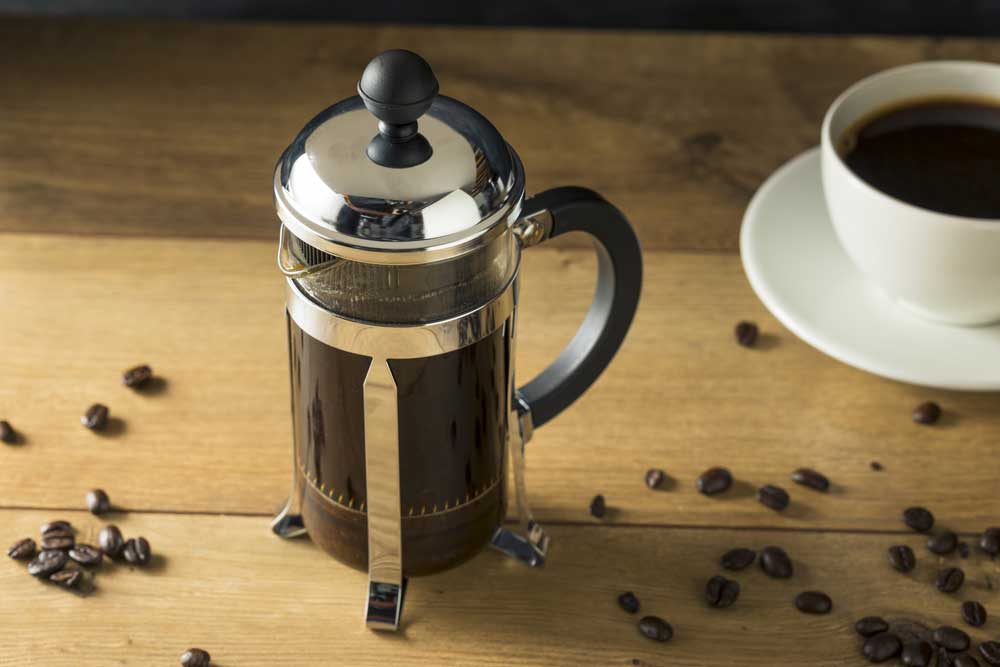 The coffee ratio isn’t as scary or as scientific as it sounds, it’s simply the ratio of water to coffee you use. But what does that mean and how does it affect your coffee? Well I’ll tell you…

Basically it dictates how strong your coffee is going to taste, a 1:14 ratio will taste much stronger than a 1:17 cup. One isn’t better than the other it just depends on what grind size you use and what type of flavor you enjoy. I’m going to look at grind size in my next article so stay tuned.

I personally stick with 1:15 as my middle ground for pre-ground coffee meant for a French press. That’s my true north and usually what I go for when I’m trying a new coffee, BUT my exception is if it’s got the word lava in the title, or it’s described as a 5+ in strength somewhere on the packet, and if it’s got the word “full bodied”.

These all likely mean it’s going to taste much stronger, much thicker in your mouth, and likely be a little more bitter. So in these instances I go for a 1:16 or a 1:17 ratio, and I know it doesn’t sound like a huge difference but you really notice the difference. I don’t have any coffee palette to speak of but I’ve tried both with the same coffee and you can tell it tastes different.

If you’re not used to ml then you should know a standard mug is usually about 250-300ml, so for a 1:15 ratio you want to use 16 grams of coffee and 240ml of water, that’s also how much you should use for a single serve french press. And why you should consider a scale and a timer if you want to get better at your coffee.

There are a ton of different sizes of cafetiere you can use but these are all the basic ones you can choose from. I’ve included each one with the rough tablespoon amount and the more precise gram amount.

This is a large size, if you’re in the UK or Europe the equivalent size is 1L, Very forgiving if you put in too much coffee and great for guests, but how much coffee?

A tablespoon of coffee is around 7g so this is about 8 and a half Tablespoons of coffee, which fits our rough guide of two tablespoons per person.

How much coffee do I put in a 24 oz French press?

Slightly smaller this time but we’ll stick to our same 1:15 brew ratio. This time we’re at about 700ml, so we’re going to be looking at 51g of coffee and 765 ml of water, or about 7 tablespoons of coffee.

Again tablespoons can be a bit off especially when there’s this many so if you go for 8 tablespoons it won’t be the end of the world.

These are both for a 5 minute brewing time.

How do I make 2 cups of coffee in a French press?

You need a big enough french press to do this in but you can still half fill a bigger one and use it as normal, you’ll just use half the coffee in it. But you’ll want to go for 2 tablespoons per person and enough water for two mugs which you’ll have to eyeball.

Otherwise you can weigh each one and use the brew ratio to work out how much coffee you’ll need, i.e 32g of coffee and 480ml of water.

Why does my French press coffee taste weak

Two reasons could account for this, one is that you didn’t leave the coffee to brew long enough so you didn’t allow enough extraction of the flavors. Or you didn’t put enough coffee in so that there wasn’t enough coffee present to extract flavors from.

This is why weighing is good because you can do an exact troubleshoot by knowing how much coffee you used and how long you brewed for. You want 4-5 minutes of brew time which is where people get impatient so I’d start there and make sure it’s sitting a good long time before you pour it.

It has more total than espresso does but it isn’t as concentrated, and not as much as drip coffee, but if you’re hoping to get as much caffeine out as possible then you’ll want to just leave it brewing for as long as possible. This will extract more caffeine but also make your coffee taste shit…

I actually wrote a complete article on this, and the gist of it is that almost all french presses are dishwasher safe, even the metal ones. But, you’re actually better off cleaning them by hand so they don’t break and because it’s really easy and quick once you get the hang of it.

Not to mention it avoids any residual chemical smell or rust spots appearing and it’s much less likely to break if you’re doing it by hand.

I hope this helped, I didn’t want to make it too confusing because coffee should just be enjoyable, it doesn’t have to be fancy or over the top, it can just be a delicious drink. But taking some time over it can enhance the whole experience so I hope you’ll consider getting yourself a gram scale and a timer. You won’t regret it!


Also, read my other post on French Press Brew Time