Can You Add Cinnamon To Coffee? (Yes You Can And Here’s Why You Should!)

Apple pie, cinnamon swirl, cinnamon toast and the list goes on. My mouth is watering already and my stomach is rumbling. These coffee shop classics are a perfect sweet addition to any cup of coffee.

As much as I love pastries, they sure aren’t the healthiest option to reach for on a daily basis. This had me wondering if you could capture that delicious, warm, spice flavor without packing on the pounds. The question is, can you put cinnamon in your cup of coffee?

In short, you can add cinnamon to coffee. The health benefits it boasts stem from helping with weight loss to lowering blood sugar and many more. It’s healthy and delicious, the pairing is a great way to spice up the flavor of any regular cup of coffee.. 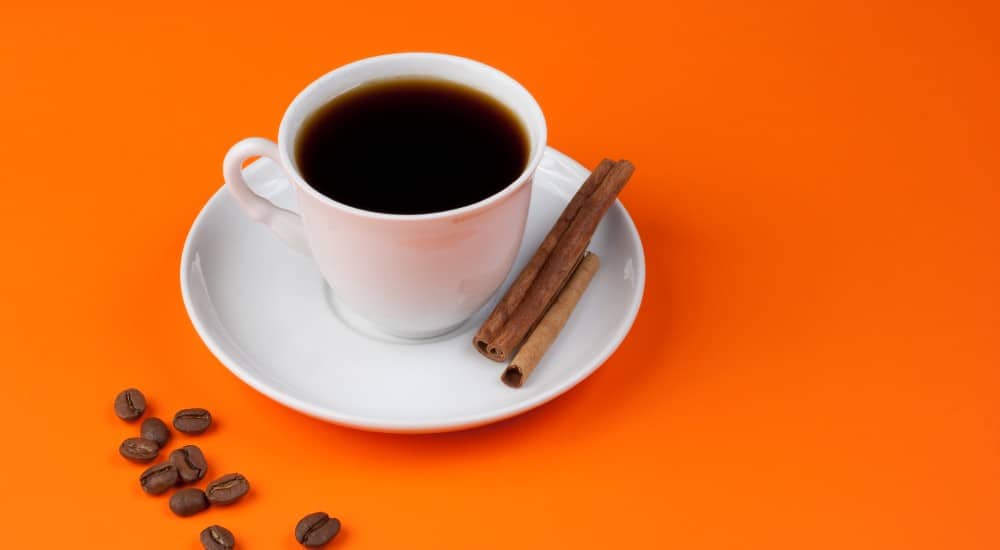 Cinnamon is a versatile spice. From sweet, sticky pastries to roasted meat and veg there’s not a lot out there that cinnamon doesn’t go with! Coffee is no exception and surprisingly, a dash of cinnamon could add a lot more than delicious taste to your fresh brewed cup of joe.

Before we get into the awesome health benefits that are associated with the spice, it’s important to note that not all cinnamon is as it seems!

When you pick up that rich brown powder it’s worth checking the label to ensure you do actually have true cinnamon. As crazy as it sounds, sometimes the brown powder labelled cinnamon is actually cassia.

Cassia is a spice similar to cinnamon, made from the East Asia evergreen trees. It contains a compound called coumarin which, when too much is consumed, has been linked to health concerns such as cancer!

The product you want to try and source is Ceylon Cinnamon. Associated with many health benefits; it is a lighter brown color and has a more delicate flavour than cassia. Also referred to as “true cinnamon” ceylon has lower levels of coumarin so less chance of developing less side effects if consumed regularly.

Cinnamon has been shown to contain large amounts of polyphenol antioxidants. Antioxidants help protect your cells by absorbing damaging free radical compounds. These are a by-product of metabolism and if they build up in your system, over time they can have quite devastating effects on your health leading to all manner of inflammatory diseases and even cancer.

The end results of cinnamon’s high antioxidant capacity is an anti-inflammatory effect. Inflammation is the result of a huge variety of stresses on your body. The primary cause of diseases such as diabetes, alzheimers, cardiovascular disease and cancer.

When a healthy person consumes food containing carbohydrate, the sugars that form this are quickly broken down and released into the bloodstream. In order for this sugar to become useful energy, the hormone insulin is released, which enables the sugar to be taken up and used by your cells.

In the case of type 2 diabetes however, the cells have become resistant to the effect of insulin. No matter how much insulin the body produces, the cells just can’t get the energy they need.

Cinnamon has been shown to increase the cells sensitivity to insulin so helps combat the effects of diabetes.

Another benefit of cinnamon is its ability to lower blood sugar levels. It is able to do this by working with digestive enzymes to slow the breakdown of carbohydrates so you get a steady trickle of sugar released.

As if these benefits aren’t enough on their own, a compound in cinnamon also acts similarly to insulin and helps mimic the actions of the hormone. Although this is a much slower effect compared to insulin itself, the benefit adds up over time.

Cinnamadehyde is a compound found in the oily component of cinnamon. Several studies have shown it to have antifungal and antibacterial properties. As well as helping to fight infections, cinnamon has been shown to have a positive effect on limiting the bacteria that cause bad breath and tooth decay.

Although the evidence is limited to lab based and animal studies, evidence is emerging that shows cinnamon may produce anti-cancer properties. A component in cinnamon appears to block the cell signalling pathway that allows for tumours to grow their own blood supply network. Without this, cancer growth rate is severely limited. Further studies are required to determine how potent this action is in humans but the groundwork looks promising!

Triglycerides are a form of fat that the body utilises for energy. Where too much food (especially carbohydrates) is consumed, the excess calories get converted to triglycerides and are stored in fat cells. If your body has excess triglycerides circulating in the blood then you are at risk of developing issues such as atherosclerosis (inflammation and weakening of the arteries) which in time causes heart disease.

Cinnamon has been shown to significantly reduce blood triglycerides when supplemented, so may have a role in helping protect against cardiovascular disease

This study has brought together data that supports potential neuroprotective properties of cinnamon. It has been linked to a reduction of the build up of degenerative proteins that cause Alzheimers disease and it seems to help stabilize neuro-transmitter levels as well as exhibit neuro-protective effects. This improved motor function in mice exhibiting Parkinsons disease.

Cinnamon In Coffee Side Effects

Some people don’t tolerate cinnamon very well and the spice has been known to cause allergies in some people. If you consume very large quantities of the spice it can cause mouth irritation as well. To avoid this, stick to ceylon cinnamon rather than cassia.

Cinnamon may interact with prescription drugs such as diabetes drugs and heart medications. If you are on any prescription medications, it’s best to consult your doctor before adding cinnamon to your daily coffee routine.

The coumarin found especially in cassia cinnamon may cause liver toxicity in large amounts. Luckily the effect of this is minimal where just a pinch of cinnamon is added here and there. The recommended daily amount of coumarin for a 70kg person is 7mg so that’s about 1 teaspoon of cassia cinnamon. Ceylon cinnamon has only trace levels of coumarin so is a safer option for the long term.

Cinnamon In Coffee For Weight Loss

Coffee is a great addition to any weight loss plan. The caffeine in coffee gives your metabolism a boost to help burn off those pesky calories. As well as giving you the energy to workout and suppressing your appetite, black coffee alone (without milk, cream or sugar) is a must if you’re trying to shift those pounds.

Now, to add to the good news, cinnamon has been shown to aid in weight loss as well. It helps lower blood sugar and circulating triglycerides which are the precursors of adipose tissue (or fatty tissue).

These two delicious ingredients pack a vast array of health benefits, from antioxidants to weight management. The combination is a very welcome addition to a typically limited, health conscious diet.

A problem with adding cinnamon to a fresh brewed cup of java is that, just like coffee grounds, cinnamon doesn’t dissolve in water. It often remains floating on the surface of the beverage or forms a sludgy mess at the bottom of the cup. This uneven distribution means you run the risk of experiencing bitter lumps of cinnamon instead of the smooth sweetness we all love so much.

A solution to this issue is storing fresh cinnamon sticks in with your coffee grounds. This allows the flavour to gently infuse into the beans as they sit in storage. This is great if you’re partial to just a hint of cinnamon but if it’s the health benefits you desire then, without actually consuming the cinnamon you may miss out.

A second option is adding ground cinnamon to the milled bean before brewing. Using a french press allows a good amount of flavour to diffuse into the hot water, giving a more rounded flavor experience but filters away that nasty sludge. Be wary if using coffee filters as the cinnamon can affect the paper and clog it up.

If black coffee is your go to drink you can spice it up any time of the day with cinnamon. If you have already brewed the cup add a ¼ – ½ teaspoon ground cinnamon and stir. Sip gently and be wary of the dregs leftover as the cinnamon may sink and form a sludge.

Cinnamon tends to mix better with fats so if you add milk or cream to your coffee try mixing the cinnamon with this prior to adding the coffee. It should give a more uniform distribution of coffee to spice.

For less residue, add cinnamon to the coffee ground before brewing (see above).

How To Make Chai Tea At Home