It should be as straightforward that a frappuccino is an iced version of a cappuccino right?

A cappuccino is an Italian hot espresso drink made with equal parts steamed milk, frothed milk, and espresso. A Frappuccino is a cold Starbucks drink made by blending together ice, milk, sugar syrup, and their own instant coffee syrup and is normally served with cream on top. Frappuccino is a Starbucks trademark that they bought and is exclusively owned by them

It has the essence of being a blended up cappuccino but that’s not how it’s made, you don’t make a cappuccino and blend it with ice, although that would be delicious I’m sure. No the parts get blended together and it becomes frothy and milkshake-like, but that frothiness is reminiscent of a cappuccino, hence the name.

Both are delicious, one is definitely better on a hot day and they both do contain coffee. Although decaf versions of both are available if you ask your barista nicely.

But there’s got to be more to it than that surely?

There is! I’ve got 10 more interesting differences between cappuccinos and frappuccinos, read on… 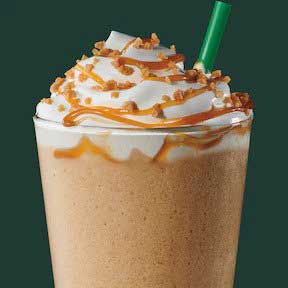 That’s right, if you’re ordering a frappuccino at a different cafe, they’re violating a trademark!

And while Starbucks own the term Frappuccino they didn’t actually invent it, it was a smaller chain of coffee shops in Boston that came up with the idea, combining a Frappe, which was a locally used word for milkshake, with coffee. They were serving them proudly in the early 90s before Starbucks bought over the chain and became the owners of the name and recipe, which they changed, introducing it into their own coffee shops in 1995.

Now I’m not sure what the original recipe was because Starbucks has kept it a secret but I’m gonna guess that it was a combination of a hot cappuccino that had ice and cream added before it got blended together. Hence the name, but it could be that frappemericano just doesn’t roll off the tongue as well.

After that, it would make sense that Starbucks would want an easier process to roll out across their stores so made a coffee frappuccino syrup that they could easily make in bulk and ship out, then blend that with ice and milk and it’s a much easier way to make it.

I could be wrong but it does sound right doesn’t it?

And of course, no one owns cappuccino and you can order them anywhere, and other coffee shops may have a blended iced coffee but legally they aren’t allowed to call it a cappuccino.

2. Can You Get A Frappuccino Without coffee?

You can indeed, these tend to be called Cremes on the Starbucks menu, or Creme Frappuccinos, and these are made without any coffee whatsoever and are considered to be caffeine-free.

They don’t offer a plain one because that wouldn’t have any significant taste being made of just ice and milk, but they offer a huge selection in a large range of incredibly sweet flavors from butterscotch to double chocolaty chip, there was even the legendary smores flavor for a little while but that disappeared and is now lost to the ages sadly.

The coffee you get in a Frappuccino is also not espresso unless ordered, it’s an instant coffee but I talk about that later on in the article.

3. You Can’t get A Frappuccino Served Hot But You Can Get An Iced Cappuccino

Some people wonder why you can’t order a frappuccino hot, but it’s simply because all the ice would melt, and it wouldn’t be anything at that point, it would be hot coffee-flavored milk without actually being a regular coffee.

Better off going for a latte with your favorite flavoring at that point.

But cappuccinos on the other hand, you can make hot and then pour over ice to have a really milky delicious iced coffee. The froth will disappear and you’d be better off doing this with a latte but it’s something you can do if you want a stronger iced coffee because there’s less milk involved.

So in the Cappuccino vs Frappuccino debate that’s a point to the cappuccino because it can be served hot and cold.

4. You Can Have Frappuccino Flavoured With Fruit

My first ever time to a Starbucks (which was embarrassingly late in 2010 when I was 16, I’m from a tiny village OK!) I had a strawberry creme frappuccino. I didn’t know what I was having but it was sweet, fruity, milky, and delicious.

Now there is no way you could put strawberry syrup or any other fruit syrup in a cappuccino and actually enjoy it, it’s just not going to happen. So that’s a point to team Frappe for that extra diversification you can enjoy in flavor.

If you were to make a version of it yourself at home you could make it with fresh fruits which would be even tastier, and healthier than the sugar-laden syrups from Starbucks.

5. Frappuccinos Have Much More Sugar In Them

Speaking of sugar-laden syrups, Frappuccinos are definitely bad for you compared to a plain cappuccino with no added sugar. The syrups are sugar syrups packed full of flavorings that make them truly delicious but not at all good for you.

In fact, a standard venti sized Mocha Cookie Crumble Frappuccino has 76g of sugar in it! That’s 15 teaspoons of sugar in a single coffee!!

A plain cappuccino, on the other hand, is just milk and espresso, no sugar and no additives involved. If you start adding sugar or say vanilla flavoring the balance starts to shift. But I think it’s safe to say that frappes are worse from you then… Cappe’s?

But of course, some people far prefer the taste of them so that’s the balance that has to get struck.

In the world of Starbucks bigger=better, that’s why you can order such enormous coffee’s, while at an independent coffee shop you’ll be surprised how small a cappuccino is. In Australia, they have a wonderful coffee culture with smaller far tastier coffee’s than any I’ve drunk in a Starbucks for instance.

But even in Starbucks, the biggest size of Frappuccino is bigger than a cappuccino, check out the size comparison below.

And you can’t get a Frappuccino in a short size, 24 oz is massive FYI, so much liquid to have in one sitting!

7. Cappuccinos Have To Use Espresso and Are Less Flexible

If you were making it at home how you get the espresso is up to you but there are 3 main ways you can get it. Or you can get a cappuccino maker…

Big, expensive machines that have a steep learning curve and a bit of a hassle all round. But they of course make the best espresso so if you truly want to craft a cappuccino at home this is the way to do it.

These are quick, easy and to some people disgusting. But they’re an easy way to make a reasonably good espresso, they definitely have a unique taste that isn’t nearly as good as coffee shop coffee but they’re not bad at all for home use.

You can even buy Starbucks cappuccino pods for certain machines and just cut out the middleman, it’s not the same but it’s close.

Not technically espresso but you can get a strong coffee out of a stovetop coffee pot that’s a good enough substitute if you have something to froth up the milk with.

Frappuccinos, on the other hand, are made with Starbucks specific roast coffee called its Frap roast, which is turned into instant coffee and made into a syrup. They’ve also got an espresso Frappuccino on the menu which actually uses both espresso and the syrup but if you were to make a version of it at home you could use any coffee.

I’d recommend a strong coffee and a darker roast because there is a lot of dilution once the ice gets added.

All so similar yet all so different. These are your three versions of cold coffee that you can have at home, the frappuccino is the milkshake-like blended coffee that we’ve been talking about, there are some differences but it’s essentially an iced coffee that gets blended with sugar syrup and cream on top.

Iced coffee is just that, coffee that has been poured over lots of ice to cool it all the way down, really tasty, and surprisingly refreshing on a hot day.

Now cold brew is coffee that’s brewed in cold water, it’s generally left in the fridge for 12-18 hours to gently extract the flavors. It tends to be a bit like rocket fuel being exceptionally caffeinated and packed full of flavor, but a different flavor to hot coffee poured over ice, partly because it doesn’t get diluted.

9. It’s Easier To Make A Frappuccino At Home

As I said, making espresso at home requires skill, lots of practice, and usually some very expensive equipment. It can be done but it’s a full-on commitment to a new hobby if you decide you want to become an at-home espresso maker.

But I say do it, it’s fun, challenging, and you get to drink lots of coffee, what’s not to like?

Frappuccinos on the other hand, while they won’t technically be a frappuccino when you make it at home you can recreate easily enough. You just need any ol’ coffee, even instant coffee, plus milk, ice, and a blender to put it in.

Whizz it all together with either your favorite fruit, or you can buy flavored syrups. You could buy Starbucks coffee and Starbucks syrups if you were looking for as authentic an experience as possible.

10. You Can Buy Both Cold At The Grocery Store

The final thing they have in common is that you can buy both chilled in the grocery store. In the fridge section near the snacks, you can often find individual bottles of both. They’re both surprisingly nice and while they’re not the same you get in an Actual Starbucks if you’re on a road trip and it’s hot they can be very tasty.

So there you have it, the main differences are that Frappuccino is served cold, it’s got more sugar in it, has a larger variety of flavors and it’s exclusive to Starbucks. You can also buy them without any coffee added and these are called Creme

Cappuccinos, on the other hand, are served hot, you can buy them at any coffee shop and generally come as they are without flavored syrups involved.

Both are delicious and both are coffee.

29 Common Coffee Names (And What They Are)