Do Lattes Have Coffee In Them? Find Out Here…

It’s a fair question, and a properly made latte can be so smooth you might not pick up the taste and be able to tell if a Latte really does have coffee in it.

Your standard latte does have coffee in it, generally containing 1-2 espresso shots which is a large amount of coffee. The word latte is Italian for Milk and the Latte as we know it is short for cafe latte, coffee with milk. It then of course also contains caffeine in it, even decaf espresso will contain some caffeine.

But how much caffeine is in a latte? Can you make a latte without coffee? What about Chai Lattes? Read on to find out… 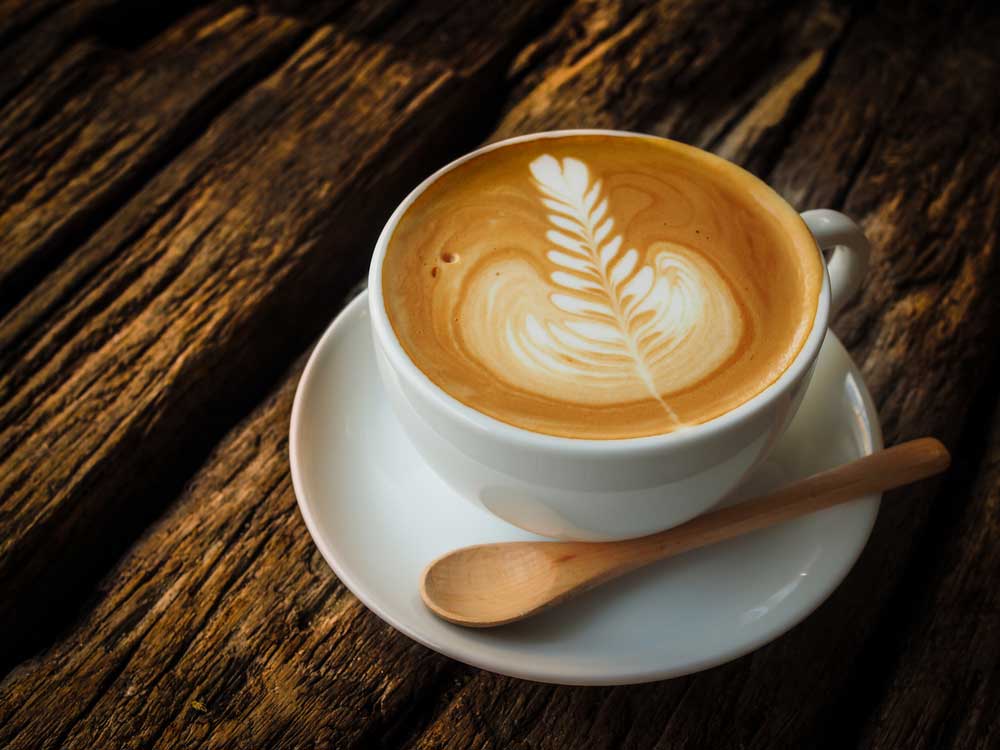 Does A Latte Have More Caffeine Than A Regular Coffee?

This is a little bit like the question how long is a piece of string, it depends on what type of coffee is used, how long it’s brewed for, and so on.

But generally speaking, an espresso, which is what is used in a latte has about 75-90mg of caffeine per shot, and lattes tend to use either 1 or 2 shots of espresso so you’ve got about 150-180mg of caffeine in a large one.

Now your regular drip coffee has about 120mg of caffeine per 12 oz cup, but if you have a bigger or smaller cup you’ll get less or more. But if your regular coffee is an americano then that’s also espresso-based, so you’ve got the same amount as in a latte.

Basically, I’d say they’re about the same, you could get more caffeine by drinking more drip coffee, but you can ask for an extra shot in a latte to easily perk it up.

If you’re looking for strong coffee then I’d have just the espresso by itself, it’s more concentrated and consumed faster so you end up feeling more alert and awake afterward.

Do chai lattes have coffee in them?

I talked about this in more detail in another article but I’ll give you the gist here.

No, Chai lattes are black tea with spices and milk. The latte is again the word for milk here and chai is short for masala chai which is spices with tea. The spices are generally different depending on where you go but as a base, they tend to have cardamom, for that foreign spice taste, ginger for warmth, and cinnamon for warmth too but also that wintery taste.

Surprisingly the caffeine content is pretty similar, looking at Starbucks chai lattes specifically, because the black tea tends to get brewed for an extended period the amount of caffeine is still very high, around 105mg compared to 120mg for the same size of latte.

I always thought that chai latte was a good no caffeine alternative for when it was too late but apparently not!

But, there is such a thing as a dirty chai which is a chai latte with a shot of espresso poured into it. That will certainly have coffee in it, and I for one can’t wait for the lockdown to be over so I can go out and order one for myself!

What’s The Difference Between Regular Coffee and Latte?

The difference as for each of these as we know them is in the type of coffee used in each and the way the coffee gets made. Your regular coffee is most likely a drip coffee which is made by running hot water over ground beans to extract the flavor where it is then passed through a filter into a jug.

Espresso, on the other hand, is made by forcing high-pressure water through the coffee beans, and it’s this high pressure that creates the intense flavors, syrupy like feel and crema on top.

And Latte is made from this espresso which has steamed milk poured over it, the steamed milk is milk that’s been heated up using steam to give it a frothy lighter feel than just regular heated up milk.

The type of bean that gets used is also different, espresso is made using espresso beans which are usually roasted for longer to give a darker roast and are ground to a finer powder to allow the water to completely saturate on its way through.

You can use either bean for either type of coffee if you’ve got the right gear and the right grind size but that’s the gist of it.

Can You Have A Latte Without Coffee?

If you were in Italy and ordered a latte, well first off you’d probably get a strange and quizzical look, then if you persisted you’d find yourself drinking a glass of hot milk. In America, the UK, or any other English speaking country and you wanted a latte without coffee I’m sure they’d be happy to make you one but you’ll likely get a strange look all the same.

A Latte without coffee is simply, milk because those are the two ingredients, the pattern on top comes from the way it gets poured and if it’s got chocolate on top then the barista has probably got confused between a latte and a cappuccino, which is they have I’d watch out because if they don’t know that difference it’s probably not going to be very good.

So you can have a latte without coffee in it, but I’d order warm milk, or just get something else, maybe decaf if you’re not in the mood for caffeine.

This makes the cappuccino taste stronger even though they have the same amount of espresso in them because it’s less diluted with milk leaving you with a stronger taste.

You’ll also get asked if you want chocolate on top of a cappuccino which adds a little sweetness to it, but if you like that then have a try of cinnamon on top, it gives a little spiciness and leaves you with something a bit different.

Which is healthier you ask? Well, technically Cappuccino has less milk in it, so by that logic, it’s going to have a few fewer calories, but if you’re looking to healthy swap to either low-fat milk or just stick with an espresso/black coffee.

And as a fun final fact if you’re in Italy it’s the custom to only drink cappuccino before 11 am, it’s a morning drink and if you order one in the afternoon you’ll stick out like a sore thumb for being a tourist. But if you’re anything like me you’ll stick out because you’re wearing shorts, sunglasses, probably sunburnt and speaking terrible Italian, so why not go all in and have a cappuccino mid-afternoon am I right?

This is a trickier one because both are made with espresso and steamed milk, the difference comes from how much milk you add. Latte has more milk and Flat white less, with no foam on top as opposed to the little bit of foam you get on a latte, but not as much as on a Cappuccino.

Again you could say that flat whites are healthier because they use less milk than a latte, but they have generally the same amount of coffee, 2 shots of espresso. A flat white might have more than a small latte however which could only contain a single shot, but it depends which cafe you’re at or how you make it yourself at home.

Is A Latte Considered Coffee?

Yes, if you’re trying to avoid coffee I’m afraid you can’t have Lattes either, neither can you have cappuccinos, flat whites, americanos, or any other espresso-based drink.

And if you’re avoiding caffeine you can have decaf, but only one because decaf still has caffeine in it, and you’ll need to avoid chai lattes because they are tea-based and still contain a good amount of caffeine as I mentioned.

So to sum up, yes lattes do have coffee in them, and quite a lot of coffee at that, but if you wanted to have a coffee-free latte you’ll be drinking warm milk. Which while still tasty and is still technically a latte doesn’t have much point to me.

Although my childhood evening drink of winter was hot milk with honey stirred through it, delicious.

How Is Coffee Decaffeinated? (By The Power Of Cool Science)