What Is Vinobrew? (A Cunning Concoction)

A year or so ago it was a quiet Sunday and with not an awful lot to do I was watching TV, feet up on the couch, and a craft beer in hand. My usual Sunday stupor was replacing any motivation to do anything particularly productive with the day.


I flicked over to the science channel to try and glean something that resembled intellect alongside my daytime TV binge when a program came on about GoatHouse brewing and Wise Villa Winery. They had collaborated to create a substance called Vino Brew. Well, that’s two words I never thought I would see combined! What is Vino Brew?

Vinobrew is a carefully crafted combination of cold brew coffee, craft beer, and a splash of red wine. The combination sounds horrendous when you first look at it on paper. Surprisingly though, if balanced correctly, the deep complex flavors of coffee, beer, and wine can complement each other.

Sitting there with my beer in hand I figured why not give it a go? I had a bottle of red open and some cold brew chilling in the fridge. After a few attempts, I found that adjusting the volumes of each ingredient finally led me to a rich and exciting drink like no other.

So the take-home is, even despite slobbing out in front of the TV on a Sunday, you can still end up learning a new skill. I decided to write this article on Vino Brew as a guide for anyone who may be interested in giving it a go for themselves. 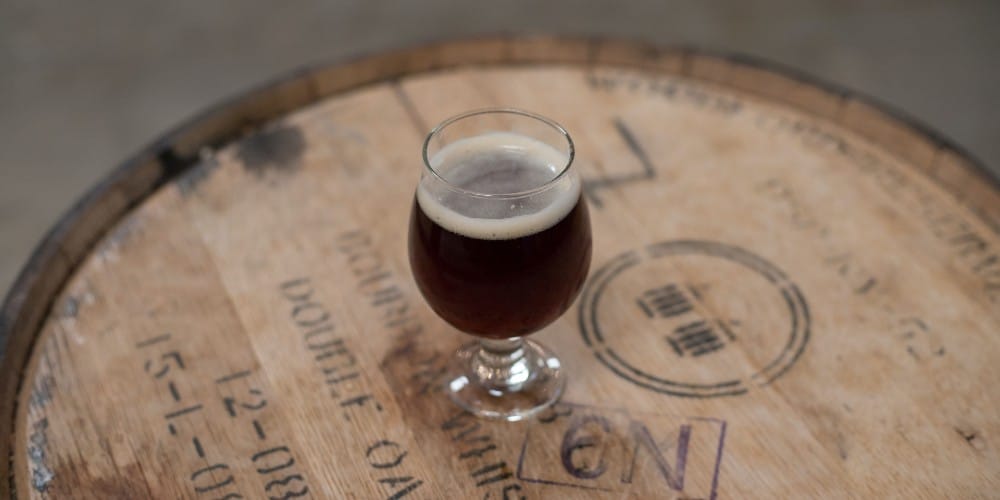 Vinobrew is a carefully crafted balance between coffee, wine, and beer. Although the combination sounds mad the three drinks actually have quite a lot in common. They’re all complex flavors with high acidity and if you select each of these carefully, you can end up with a rewarding cocktail.

Cold brew coffee is used to bring out a delicate sweetness and less acidity compared to other brewing methods. Also, you don’t want to be adding hot coffee to wine or beer!

When choosing beans to make the cold brew it really does come down to personal preference. You can use any of your favorite brand coffee or use one that’s designed for the task at hand. A lot of coffee suppliers have beans selected specifically for making cold brew.

The coffee is coarsely ground and steeped in water for 12-14 hours to allow a slow, smooth extraction. This is then passed through a filter to remove the grounds and can be stored in the fridge for up to a week once prepared.

A great trick with cold brew is that you can freeze some of it in an ice cube tray and use these coffee-cubes to keep your cold brew cool without watering it down.

When it comes to choosing a beer for vino brew you need to select a darker ale or stout. A light lager just isn’t going to cut it when it comes to vino-brew as the flavors won’t compliment and you’ll end up with a watered-down, slightly bitter glass of disappointment.

Red ale, imperial stout, or a darker IPA are complimentary alongside a rich cold brew coffee. If you have a sweet tooth then a malt may be the one for you!

The richer, smooth textured beers or complex hoppy flavors can be chosen based on your own taste.

I prefer a dark stout like Guinness but I know friends who would pass that up for the refreshingly bitter IPA any day.

Now for the wine. It has to be a red wine for this concoction and again, the choice of red can be adapted to your own taste. A full-bodied one like a malbec or a cabernet sauvignon is ideal.

If you’re keen to dampen down those rich tannin flavors then a medium-bodied merlot is also a good option.

It sounds like a combination destined for failure on the taste front. Beer, wine AND coffee? Surprisingly the flavors can actually compliment each other. It all depends on the ratio of alcohol to coffee.

Beer should make up at least 70% of the volume. The smooth, bubbly texture makes the base of this drink. Next, the wine should take up around 15-25% of the glass with the final flourish being only an espresso shot worth of cold brew. The coffee has the strongest flavors so less volume is needed for it to bring the drink together.

If you’re attempting this at home the best thing to do is trial and taste. Different volumes of the alcohols to coffee suit different people so if your first sip tastes a bit off don’t be disheartened!

If it’s too bitter try less coffee or a darker ale. Too acidic? Try less wine or a lighter red.

This trial and test routine makes for a fun tasting afternoon and is ideal to entertain guests after dinner.

If beer just isn’t for you, there’s still a whole host of options. Coffee and wine is a pairing that sounds unusual but can work really well. It is worth mentioning that you should be wary of the combination though.

Caffeine and alcohol give you a crazy buzz but should be consumed in moderation to avoid any regret the following day!

Tonic wines (such as Buckfast) have been around for over a hundred years (Buckfast was first developed in 1880). These are similar to coffee and wine but the full coffee is replaced with just the caffeine element.

Apothic brew is a blend of cold brew coffee and red wine. Although the caffeine content won’t get you buzzed very quickly, the wine has strong coffee notes and is a great after-dinner solution for coffee and wine lovers.

Another wine coffee combination that has to be mentioned is coffee beans infused with wine. Basically the beans are steeped in red wine before drying and roasting. Alcohol-free but still holding onto the rich, delicious wine flavors, these beans are great for a mid-morning pick-me-up and safe to consume at work or on the road.

If you love everything about the Vinobrew except the wine component then this section is for you! Coffee infused beers have been gaining popularity lately and it’s for a good reason. From coffee IPAs to cold brew stouts the craft beer industry has every base covered!

It’s also a combination you can try yourself at home. Next time you crack open a cool, refreshing beer on a hot summer’s day, try a shot or two of cold brew in the glass and you may just surprise yourself.

Vinobrew is just about as hipster as it gets! If you can’t decide between a refreshing craft beer, a revitalizing cold brew or relaxing glass of pinot noir then why not have them all? Trial and error is the only way to make this drink work for you, so give it a go and let us know in the comments what you think!