What Is A Piccolo Coffee?

When I first heard about a piccolo, my mind first went to a type of small wind instrument that I don’t play. However, a piccolo in the coffee world has little to nothing to do with music. Once you try it, though, you’ll sing its praises.

A piccolo coffee (or piccolo latte) is basically a caffe latte with a bigger ratio of coffee to milk. One shot of espresso between 20 and 30 ml is topped off with just enough steamed milk to fill a demitasse glass. You’ll even get a small layer of foam on top!

This short coffee drink is only three or four ounces in size, but it packs a punch with a creamy finish.

The word piccolo in Italian simply means small or little. So like a piccolo is a small flute (I think) a piccolo latte is just a small caffeine-packed latte.

Let’s see where the piccolo got its start, how to make one, and how to order one at Starbucks. 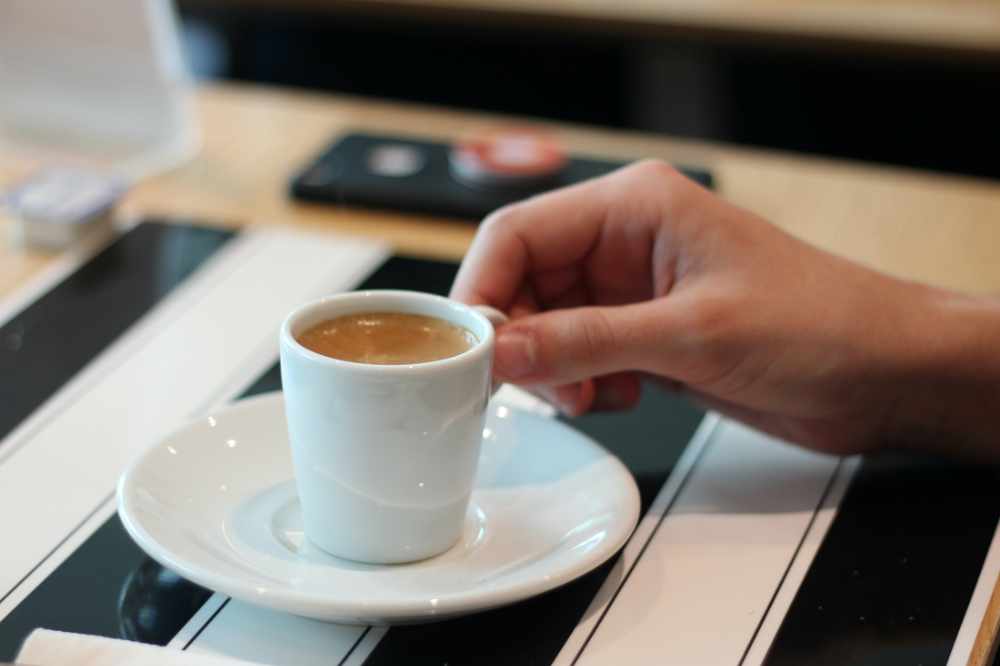 So, what exactly is piccolo coffee?

The piccolo is basically a latte for those who like their coffee “dirty” (you know, with extra espresso shots.)

This drink uses a single ristretto shot (20-22 ml) or a single espresso shot (30 ml). It’s then topped off with 40-60 ml of steamed milk and a layer of foam on top. It’s almost exactly half the size of a latte and the shot of ristretto in the piccolo gives it a more intense coffee flavor.

Unlike other hot coffee drinks, a piccolo is not served in a mug. Instead, it is served in a small latte glass that is about four ounces in size.

The origin of the Piccolo latte: Where did this coffee drink begin? 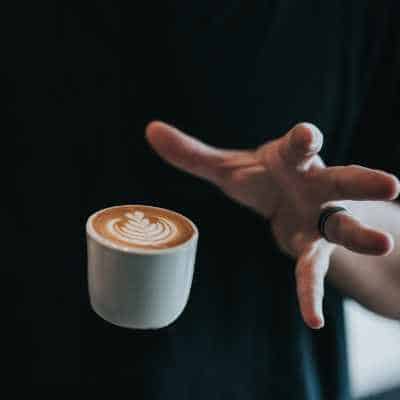 So now we know what a piccolo is. But where did this tasty drink begin?

Since the name is Italian, you’d guess that this drink has roots in Italy. However, you’ll need to look at another continent entirely. The story goes that the piccolo latte got its start in the early 2000s in Sydney Australia.

The coffee roasters wanted to see how their roasts blended with milk. But, instead of spending their days drinking full lattes and feeling full, fat, and bloated, they poured just enough milk into an espresso shot to study the taste of this combination. Then they’d adjust their roasting techniques accordingly.

The drink started to catch on as many people preferred the taste of this half-sized latte. Finally, they decided that this powerful yet creamy cuppa was worthy of holding its own spot on the menu. And thus, the piccolo coffee was born.

The concept is not a completely new one (this drink is just espresso and a bit of milk, after all.) However, the coffee roasters in Sydney were the first to nail down the exact measurements of a pretty tasty coffee-to-milk ratio and put that on a menu. Props to them!

The piccolo vs. other espresso drinks

But how does the piccolo compare with those other small coffee drinks, like the cortado and macchiato?

While these short espresso drinks have a lot in common (and generally share the same obscure corner on a coffee shop menu), they have a few key differences.

We’ll highlight their differences and let you pick your preference.

The piccolo vs. the cortado 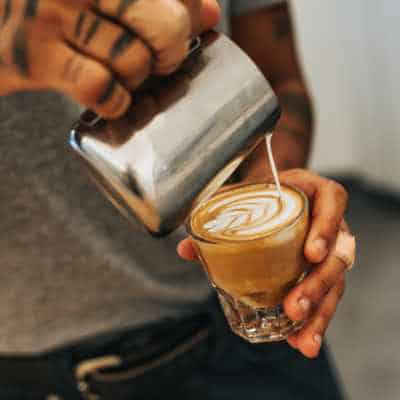 Cortado: a 4-ounce drink with a double shot of espresso and 2 ounces of steamed milk on top (usually without foam).

The piccolo and cortado are very easily confused since they are roughly the same size drink and are both served in a glass. However, you’ll notice that the cortado has a stronger coffee taste and the piccolo has a lighter, sweeter flavor. This is because the cortado is made with a double shot of espresso while the piccolo uses a single shot and fills up room in the glass with extra milk

The piccolo vs. the macchiato

Macchiato: A 2.5-ounce drink with one shot of espresso and a few teaspoons of milk froth on top.

This coffee drink is stronger than the piccolo and the cortado. Macchiato in Italian means “stained” and this drink has just enough milk to make a mark on top of a single shot of espresso. The milk for a macchiato is also treated differently. While the steamed milk for a piccolo is silky and smooth, the macchiato is steamed to be foamy and frothy, similar to a cappuccino.

How to make a piccolo: The recipe

First, you want to choose dark roast beans with chocolate or caramel notes. Pull a ristretto shot into a small latte glass, then you’ll top it off with steamed milk and foam. 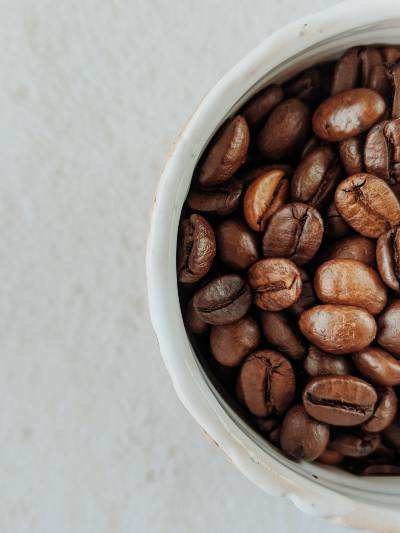 Choosing which coffee beans to use is an important part of making a piccolo. The best coffee beans for your ristretto base will be dark roast beans with chocolate or caramel notes. Coffees from Guatemala, Brazil, or Sumatra should fit the bill.

Not sure which coffee beans to choose for your piccolo? Check out our coffee of the month for more inspiration.

Freshly ground beans will give your brew an extra boost of flavor. Using a burr grinder, grind your choice of beans and pack your grounds into the portafilter. To make one piccolo, you will want to use the filter for a single shot of espresso.

You will want to pull your shot of espresso so that it is between 20-30 ml. A 20-22 ml shot is considered ristretto, while 30 ml is a single espresso shot. (We’d lean towards the ristretto for this drink!)

To make a ristretto, you’ll use less water and less time to pull your shot. You can use a shot glass marked with measuring lines and cut your shot off when it reaches the half-ounce line. 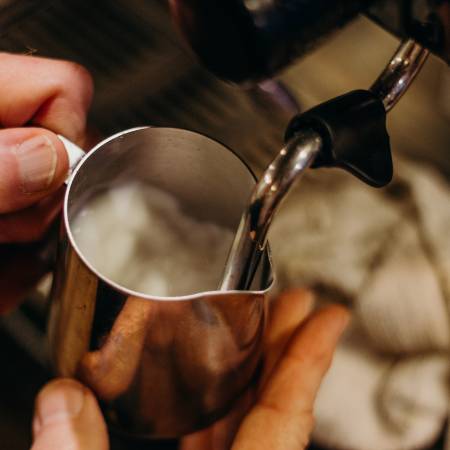 Steam your milk, letting it reach a temperature of about 140°F (60°C). You want the texture of the milk to be silky and include some microfoam.

While espresso is usually served in a demitasse, a piccolo is served in a small latte glass. So if you didn’t pull your shot directly into this miniature glass, transfer your shot and then add the steamed milk on top.

The amount of milk you should use should be between 40 and 60 ml. Use your spoon to hold the foam back while you pour the milk. Then top off your piccolo with a light layer of foam. You can even get fancy and add a little latte art to the top!

Now, you are all set to enjoy this small but delicious cup of coffee.

How to order a piccolo at Starbucks

It’s pretty straightforward to make a piccolo at home, but when you try to order a piccolo latte at Starbucks, you may hit a dead end. Starbucks stores in Thailand, Singapore, and Australia include the piccolo on their menus under “Starbucks Reserve espresso drinks.” Unfortunately, this drink hasn’t caught on in the U.S. or U.K.—yet.

But, we’ll let you in on a Starbucks secret. A Starbucks piccolo is basically the same drink as a Starbucks flat white, it’s just half the size.

In countries where they sell it, a Starbucks piccolo is described as a four-ounce drink containing one Reserve ristretto shot with steamed milk and foam. However, at any Starbucks, you can order an 8-ounce flat white which has two ristretto shots and steamed milk (no foam, though).

So, next time you’re at Starbucks, tell the barista you want a Starbucks short flat white… and could they put a bit of foam on top? Then smile knowing that you’re really getting two piccolos in one cup.

But shhh… don’t let Starbucks know we’re onto them. 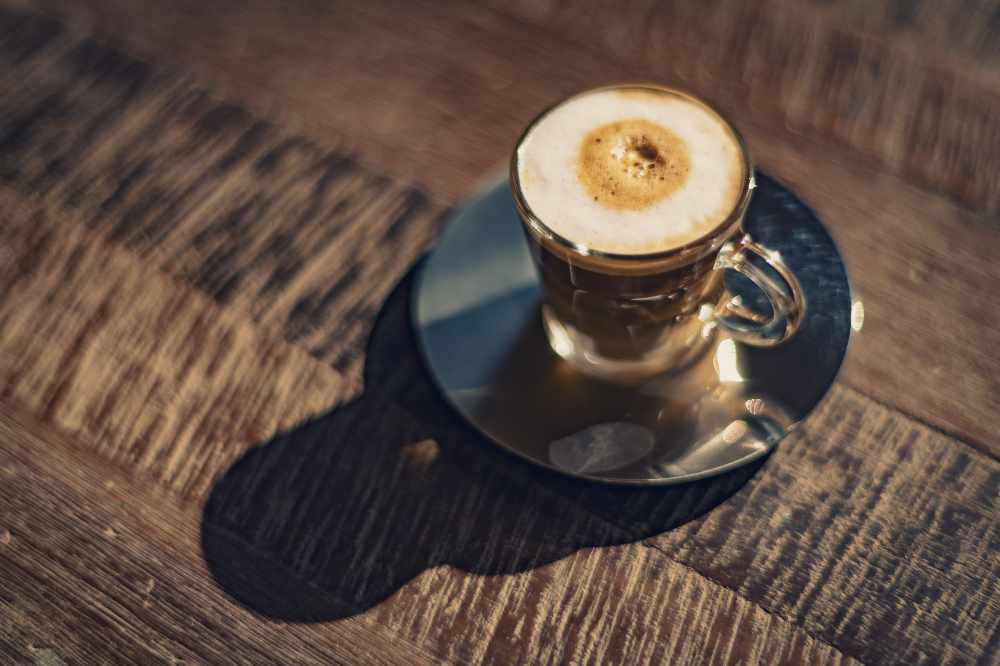 If you love the taste of smooth, nutty espressos, you have to try a piccolo coffee. This small latte has more coffee flavor and less milk than a traditional latte. It’s light on the stomach and tastes delicious, as well.

Whether you make a piccolo latte at home or order one at Starbucks, you now possess all of our secrets.

You can thank a coffee roaster in Sydney for coming up with this small but amazing drink.

What is a cappuccino vs a frappuccino?

A cappuccino is made with one part espresso one part steamed milk, and one part frothed milk. A Frappuccino, on the other hand, is a frozen coffee drink you get at Starbucks. This coffee drink is a blend of ice, milk, sugar syrup, and instant coffee syrup. It’s often topped off with whipped cream and drizzle.

Is ristretto stronger than espresso?

Yes, Starbucks sells 4 oz. Reserve Piccolo Lattes in some countries (such as Australia, Thailand, and Singapore.) However, you probably won’t find a piccolo coffee on a U.S. or U.K. Starbucks menu, yet. If the Starbucks near you doesn’t serve piccolos, you can order a Flat White, instead. The Flat White has the same coffee-milk ratio as the Piccolo, but it is missing the small foam layer.