What Are The Foam Bubbles On Top Of Coffee? Find Out here

I first noticed it in my French press, the water goes in and this foamy bubbly layer appears on top, what is that?

This is one of the first things I discovered on my coffee journey and one that has always stuck with me.

This foam or bubbles are made by trapped carbon dioxide being released from the coffee grounds and it’s called the coffee bloom. The gas gets trapped in the roasting process and then released when water gets added.

It doesn’t affect the taste of the coffee, it doesn’t mean anything bad and in fact means your coffee is nice and fresh. No foam when you’re making coffee in an immersion method (like the french press) is actually worse than lots of foam because it could mean that your coffee has gone stale.

But what about instant coffee? Is this the same? Let’s take a look at the two reasons you might have bubbles on your coffee. 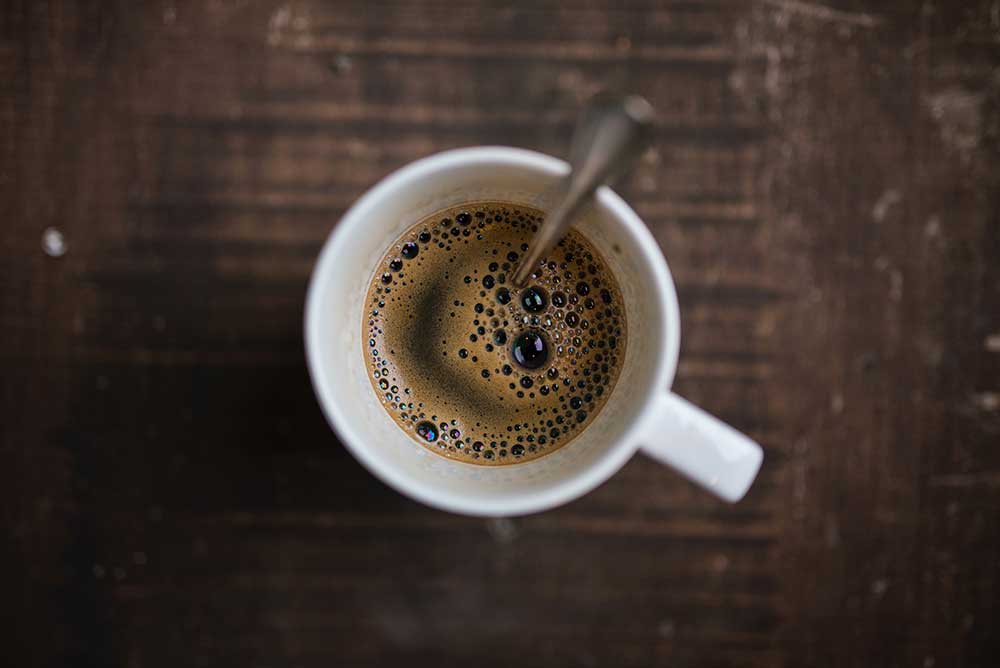 Two Reasons For The Bubbles In Your Coffee

This is the reason instant coffee has bubbles and the reason coffee that comes out of some sort of pump, like the big coffee pots you’d get at a corporate training seminar.

These bubbles are relatively stable and while some of them burst on the way to the surface of your cup others stay and float on top.

If you pour your kettle from a height this will happen and this can even happen when you add milk. But the process of black coffee splashing on itself in your mug also causes these air bubbles to get trapped. In instant coffee, it’s got nothing to do with carbon dioxide being released because this is coffee that’s already been brewed and then dehydrated.

When you use a pump to bring up the coffee it’s been pushed through a small pipe using air, and this air inevitably mixes in with the liquid causing little air pockets to come out and float on top of your Joe.

Whether they appear or not doesn’t mean anything about the state of your coffee.

However, if you’re using a french press or another immersion technique to make your coffee then it’s a different story.

I talked about this specifically for a french press but what it is is that the roasting process causes carbon dioxide to build up inside the bean as the chemicals inside change and the flavor develops.

This gas then slowly starts to release over the next 2-12 days with about 40% of the gas being released in the first 24 hours.

And while this gas gets released without touching the beans if you grind them and add water the gas escapes even faster and the result is a layer of bubbly foam that sits on top of the coffee.

If you drink just the foam it can taste bitter but as part of the cup, it’s absolutely fine.

If you make coffee using a pour over then this is part of the process where you wet the grinds and let them sit for about 30-45 seconds to allow all this gas to escape before you carry on making your coffee.

This allows the bitterness of the carbon dioxide to leave your cup allowing a more balanced and tastier cup of coffee.

What’s interesting is if you don’t get any off gassing it can mean your coffee is stale, but if you do it too soon after the roast then you’re going to get left with a huge release all at once which can also ruin the flavor. It’s a tricky process!

But if you buy from a roaster you’re going to get on just fine, and if you use your coffee within 2-4 weeks of buying it you should be left with a really tasty cup of coffee.

Why Do Rainbow Bubbles Appear In Coffee?

rainbow bubbles appear because the carbon dioxide bubbles push through the coffee oils giving you this rainbow effect as you see in oil on the ground.

It’s to do with the consistency of the bubbles and how light goes through them, where it passes through water light gets split into its different colors in oil.

And this oil is supposed to be there, coffee oils appear naturally and add to the overall flavor, they just normally get caught in the paper filter if you use one. It’s when you use a metal filter that these oils pass through and give the coffee a more buttery feel in the mouth.

Nothing to worry about and a sign of a good quality cup of coffee.

Why The Foam On Espresso Is Different

The foam on espresso is different still and this Crema is thought to be necessary for a tasty finish. It’s made by bubbles that are produced the same way as the bloom and because of the pressure that’s used to make espresso.

These bubbles combine with coffee fines which are small particles of coffee that don’t dissolve to give you that creamy finish.

Delicious as part of the overall cup but if you get a spoon and taste just the crema you’ll notice it’s a little bitter and not nearly as nice as the coffee underneath drank by itself. But combined together and you of course get the delicious flavor.

How You Can Use Bubbles In Your Coffee To Predict Weather

Now I haven’t personally tried this, I live in Scotland so you can look out the window to know if it isn’t currently raining it’s going to be in the next 12 hours… It doesn’t take a fancy weather detection system to work that out!

But this is too interesting not to share, I don’t hold to its accuracy though, so you’ve been warned!

Make your coffee as normal, but when bubbles start to form don’t stir them away. These are going to be what reveal the future.

I’ve checked and can’t find any scientific backing for this claim but I imagine it’s something to do with how pressure affects the surface tension making it more or less curved.

What do you think? Any truth to it or is it a little too folklore/bro-science?

What you can be sure of is that the bubbles that form in your coffee are nothing to worry about. It’s just trapped air or carbon dioxide being released and should do very little to affect the taste of your coffee.

But if you don’t like them there you can simply scrape the foam off using a spoon to leave you with a clearer cup.