Why Try Using Evaporated Milk Or Condensed Milk In Your Coffee

This week I tried a strange coffee concoction. I’m not quite sure what I was expecting but I’ve got to say I’m pleasantly surprised. I tried mixing condensed milk and then evaporated milk with some fresh coffee from my trusty stovetop Moka pot. 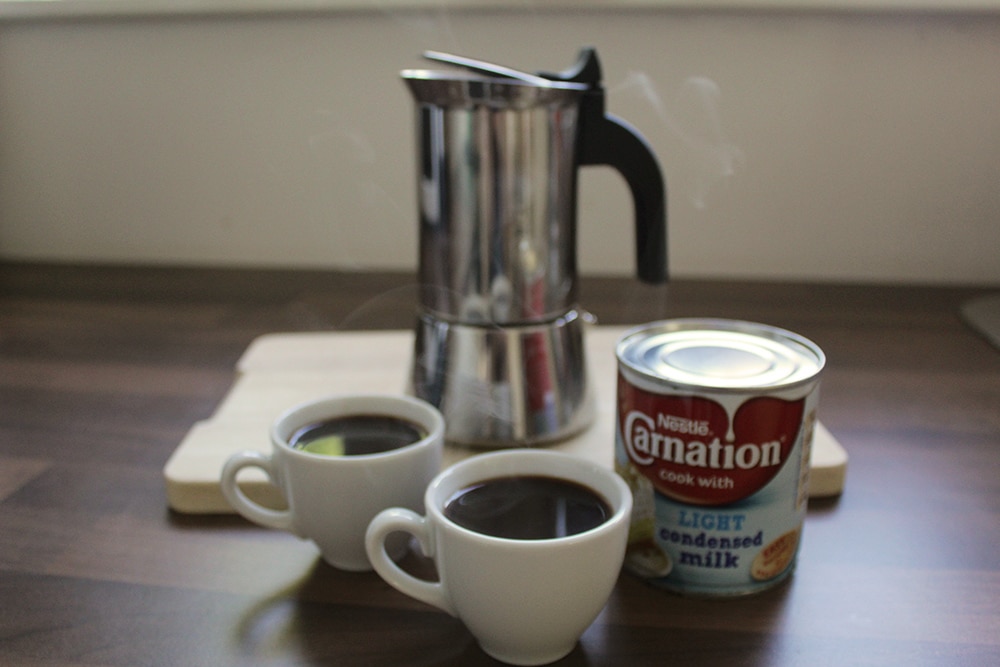 Everyone likes their cup of coffee their own way. I like trying coffee in every way imaginable. This week I tried mixing evaporated milk and condensed milk with my coffee. Not both at the same time of course!

I fired up my Bialetti Moka pot, poured the brew into two mugs, added some condensed milk to one, and evaporated milk to the other. Just like you would with milk or creamer.

While both condensed and evaporated milk do have a bit of a taste that tells you it was in a can, they both have a long shelf life, making them last in your kitchen cupboard just as well as a creamer!

While there is a little bit of a canned milk taste to them, it is forgivable for the rich creamy thickness they give to your coffee. If you have a sweet tooth, you will love condensed milk in your coffee, it’s the perfect sweetener as it turns your brew into a viscous caramel-y sweet treat. I think it produces a sweet, latte-like coffee.

What is the Difference Between Condensed Milk and Evaporated Milk?

Firstly, both condensed and evaporated milk start off as regular dairy whole milk. They are then evaporated until 60% of their water content has been removed.

That is all that makes up evaporated milk. It’s just very thick milk and is sugar-free.

Condensed milk, on the other hand, sometimes called sweetened condensed milk, is evaporated milk with a whole load of sugar added. Condensed milk is about 40%-50% sugar. That’s why it turns your bean juice into such a sweet drink.

The main reason people like to use creamer in their coffee is because it’s preserved as a powder so this makes a very shelf-stable flavoring. Even if it was to pass its use-by date, you could almost certainly use the creamer anyway without any issues.

Evaporated milk, on the other hand, is also a preserved milk. While it does have ingredients added, they are far fewer. To make a fair comparison, I looked at the ingredients of Carnation evaporated milk and powdered Coffee-Mate.

Straight off the bat, just a glance tells you that creamer has far more ingredients, preservatives, emulsifiers, and just refined simple sugar than evaporated milk does.

While some people prefer to avoid preservatives in their food altogether, if you are looking for a long-life milk-based ingredient to add to your bean juice, evaporated milk is a clear winner over creamer!

I think I’ll be bringing some evaporated milk on my next camping trip. Nothing beats a brew in the wilderness!

If you want to know about how much I love heavy cream in my coffee you can read all about it in my article about exactly that!

Of course, condensed milk is for people with a sweet treat. No need to add sugar, there’s already a massive load of it in there. Tasty though!

Condensed and Evaporated Milk vs Half and Half

This is the long shelf life alternative for you!

Evaporated milk is essentially just regular milk with a load of water content removed. If you add just as much water as you add evaporated milk to your coffee, then you’ve just added a splash of preserved milk!

Whilst both evaporated and condensed milk are delicious with coffee on their own, why not step it up a notch with these delicious concoctions?!

It’s easy and yummy. Mix either evaporated or condensed milk with your coffee. Your choice is up to you, are you a sweet tooth or not?

Add a little dribble of vanilla extract. Not too much or you’ll ruin it! Pop a vanilla pod in there for extra fanciness and you’re good to go. Just don’t drink the vanilla pod!

Super easy, it starts off with the vanilla recipe as a base! Once you’ve thrown your vanilla coffee together, dribble in a little bit of hazelnut extract. It’s as simple as that!

Do you like a boozy brew? Have you ever tried a coffee with Baileys? Well evaporated and condensed milk only make it better!

I’m going to start off by saying that the condensed milk option is really a sweet option here. Baileys is pretty sweet as it is. I’d recommend the evaporated milk, but each to their own.

It’s another easy mug o’ mud! Brew the joe up whichever way you like. Add equal parts Baileys and evaporated milk. If you already like a Bailey’s brew, this is a creamier, thicker, option. It’s great. V-recommend.

Did you know what pumpkin spice is a mix of cinnamon, nutmeg, ginger, clove, and allspice? Well, now you do! The secret is out!

This thing is so easy to make and damn impressive. It does take a little more prep than other methods though.

Throw all of your ingredients (except the coffee) into a saucepan over a medium heat. Keep stirring it for 5 to 10 minutes. It’ll start to steam and smell wonderful.

Take it off the heat, add the coffee and you’re good to go!

I absolutely recommend serving this hot off the stove! Personally, I like throwing an espresso shot into each serving but this recipe works brilliantly with any brew method!

Do you like hot chocolate? I know you like coffee. A hot chocolate coffee mix is a mocha. Why not add some evaporated milk for that extra thick richness?

Use as much milk as the powder says to use water. Add a tablespoon or two of evaporated milk. Mix it with coffee brewed in whichever way you love or just a teaspoon of instant coffee also works fine.

Simple as that! Perfect for any chocoholic.

If you’re a real sweet tooth you can try using condensed milk but this thing is already pretty sweet.

If you can’t take dairy for any reason or you’re looking for a low-fat alternative then plant or nut-based milk can be used instead. Try almond milk or soy milk in any of these recipes. Soy single cream by Alpro is a richer alternative or coconut milk or cream is a good option for a decadent treat.

To create the condensed milk sweetness with these options you can add brown sugar, maple syrup, stevia, or honey to the milk as you warm it up.

Evaporated milk is a great addition to your cup of joe if you are looking for that creamy richness but don’t have the cool environment to store regular milk. It’s great for camping, hiking, to use at work, or just at home if you love the flavor.

Condensed milk is a sweeter alternative that gives coffee an almost ice-cream flavor. Definitely a good option for a sweet treat or coffee dessert recipe but not a healthy option to reach for daily.