Why Does Coffee Make Me Poop? (A Mystery of Science)

Have you ever sat down to enjoy a fresh brew, and as soon as it touches your lips, it seems like it has already made its way through you. Before you’ve even finished the java, your stomach is snarling and roaring, and you’ve got to duck out to the bathroom. Of all the ridiculous things coffee could do; why does coffee make me poop?

The exact reason of why coffee can make you poop is unknown. When it comes to the science; the jury’s out. Although there are still theories as to what causes the coffee poops. Such as caffeine content, acidity levels, or even natural compounds which signal to your body, ”it’s poopin’ time”. 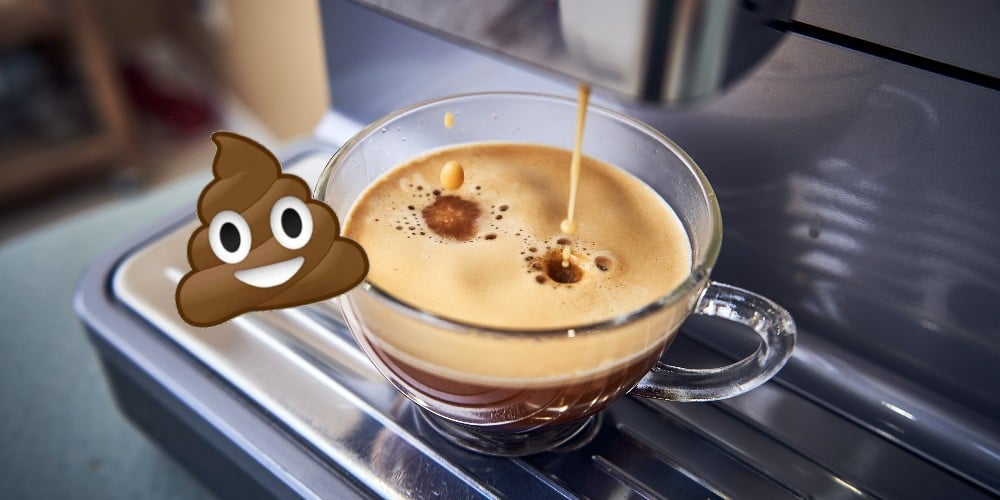 Is Coffee A Laxative?

Some people say that coffee absolutely makes them run to the bathroom. Other people have never experienced the coffee-poo despite drinking loads of coffee.

If something is a laxative it just means that it makes you poo. The coffee-laxitive effect supposedly only affects 30% to 40% of people. Since coffee makes some people poo but not others; it is only a laxative for some.

Does coffee make you poo? Then it’s a laxative to you.

Why Does Coffee Make You Poop?

When it comes down to hard facts; scientist aren’t exactly sure why coffee can make you poo. It doesn’t help that there have been very few studies into why exactly.

One theory is that it is simply down to the caffeine content. The thinking is along the lines of: caffeine is a stimulant so it’s stimulating your colon to make you poo.

It could be that an acidity bump makes you need a dump.

An increase in acid could be irritating your stomach. Your stomach might then just be responding to extra acid and trying to get rid of it.

Another entirely possible theory is that coffee contains a particular kind of compound that is interacting with your biochemistry to press your poop button.

There are so many different compounds in coffee that it’s hard to say what exactly it could be. It could be a hormone, a neurotransmitter, you name it.

If it is a chemical messenger then that would explain why it would affect people differently; because everyone’s bodies react a little differently. It would also explain why some coffee beans, or different brewing methods, could bring the laxative effect out in some people more than others.

Are you sensitive to dairy? Are you putting milk, or cream, in your coffee?

It might not be, in your case, the coffee that’s giving you the scoots. Then again; maybe it’s the combination of both coffee and dairy.

Decaf Can Also Make You Poop

Yes. Decaf coffee can also bring on the laxative effect.

One study in the BMJ found that both caffeinated and decaffeinated coffee caused people to need to poop in a similar amount of time. Interestingly, the authors of the study also suspected that the need to poo could come from “neural mechanisms or by gastrointestinal hormones”. Which would explain why both decaf and regular send you running to the throne.

How Does It Work?

Ultimately, whatever it is in the coffee, it is making your colon contract.

The bit that science does know is how you poo in the first place. Coffee is, somehow, causing your colonic muscles to contract and relax.

On top of causing you to poo in the first place; your guts are being made to move sooner than they would have otherwise. So your colon has less time to absorb water from everything you’ve been eating. That is why your coffee-dump is more often diarrhea.

Not to worry though. Just because coffee gave you the scoots doesn’t mean you’re ill.

I’m betting you’ve heard that coffee will dehydrate you. It’s a fairly common bit of coffee-science rumor that coffee is a diuretic. If it is; shouldn’t coffee tend more towards causing constipation?

As it turns out the diuretic effects of coffee only start to kick in once you’ve had over 500mg to 600mg of caffeine. Which is equivalent to drinking more than 8 to 10 espresso shots. You’re kind of asking for trouble if you’re drinking that much coffee.

Then again, there is always the chance that your body is not able to absorb as much of the water you’ve drunk because it is getting pushed out of you quicker A big glass of water after your coffee poop would surely keep you hydrated.

Does Coffee Make Everybody Poop?

Not everyone gets the coffee poops. Because some people have never experienced the coffee scoots, there are some that think it’s just a myth.

How To Stop Coffee From Making You Poop

Since the exact cause of the coffee poo is not really known then solving the issue will take a bit of trial and error.

If Caffeine Is The Cause

It’s quite hard to tell if caffeine truly is the cause because even a decaf coffee has a small amount of caffeine. So to test this theory it would take a truly caffeine free coffee. Still’ you can minimize the caffeine in your mug o’ mud.

Decaf is of course the first port of call to minimizing your caffeine content. Second to that is opting for a darker roast. Caffeine is broken down by heat; so beans which have been roasted darker have a slightly lower caffeine content.

Having something to eat alongside your coffee will help any caffeine to be absorbed slower.

You become less sensitive to caffeine when you have more and more of it. Have you ever wondered why some people can have way more coffee before getting the jitters? Not that you want to get to that point any way.

Still, if you’re having a mug of java every morning, you’re going to be far less affected by the caffeine than if you just occasionally had a brew. I’ll take that as a good excuse to get a great big espresso machine.

If Acidity Is The Cause

If acidity is the issue, luckily, an acid can be neutralized. Coffee tamers are a thing; something you add to your coffee in order to neutralize its acidity.

A simpler solution might just be to try eating a Rennie after a cup of joe.

Another fix could be to try using a different brewing method. Cold brew coffee is significantly less acidic than coffee from a drip machine. If you’re really not a fan of cold coffee you could always heat it up once it’s been brewed for a hot delicate coffee.

If A Chemical Messenger Is The Cause

If it is some compound in the brew that’s messing with your biology then that could be one of the trickiest causes to sort.

Try light roasts, dark roasts, different bean blends, and every brewing method under the sun. If it’s a chemical response to something in the coffee there is the chance that you might never stop the coffee dumps.

If Dairy Is The Cause

If it’s just a dairy product you’re putting into your coffee; that’s not really the coffee poops. That’s just a dairy insensitivity. Which is good; all it takes is figuring out how to enjoy coffee without milk, cream, or something else.

While there are lots of dairy alternatives like soya and oat milk; why not just try having your coffee black? If you already enjoy coffee with milk then you can definitely come to love drinking coffee on its own.

At first going from milky coffee to plain black coffee can have an overpowering flavor. Trust me, just go with it, give it a good chance. You will probably end up with a whole new appreciation for the drink.

The coffee poops affect everyone differently. Personally, I used to get a tumble rumble almost before I had taken my first sip. You might find that, like myself, it goes away with time. Maybe it’s something which can be managed.

If it really is causing serious issues then a doctor is the only person that can give you solid medical advice. I’m just some guy on the internet. Maybe try taking a break from your brew if it’s really that much of a problem.

Why Does Coffee Give Me Diarrhea?

The diarrhea aspect of the coffee poops is likely because your colon is being made to move things along much sooner than it would have otherwise. Because your stomach contents are being pushed out of you quicker, your colon has less time to absorb the water content from things you have been eating and drinking.

So it all just comes falling out of you. Don’t worry, you’re not sick, you’ve just got some coffee motivation.

Why Does Coffee Make My Stomach Hurt?

If coffee is making your stomach hurt then maybe try laying off on the mud. Still, once you’ve drunk it, it’s in you and you’ve got to ride it out.

The pain is from your colon contracting and relaxing. Unfortunately there’s not a lot you can do about it other than sit on the toilet. You could try eating a Rennie too.

Why Does Coffee Make Me Gassy?

The coffee is making your colon push its contents out. That includes solids, liquids, and gasses too. Better out than in!

Does Tea Make You Poop?

Many people say that tea can give them the shits just as much as coffee does.

Tea contains caffeine just like coffee. If caffeine is to blame for the coffee poops then tea will definitely encourage you to drop the bass too.

There are hundreds, if not thousands, of different compounds in tea too. There is every possibility that a chemical messenger is to blame for a tea induced tummy twister.

You might be unlucky and find that the coffee poops are hereditary. It runs in your genes!

I’ll stop the poo jokes. They stink. Besides, I can’t force them. They’d be crap otherwise.