7 Differences Between Frappe and Latte (Hot Latte vs Cold Frappuccino)

Frappe vs Latte – The Differences Explained (frappuccinos too!)

There are several differences between a latte and a frappuccino, but the main one is that lattes are served hot while Fappes is served cold with ice.

And I talked in a different article about how the difference between a frappe and a frappuccino is a trademark. Frappuccinos can only be bought at Starbucks while frappe is the general word for a blended foamy, milky, iced coffee drink.

But what else is there? What else separates a latte from a frappe? Let’s start with what each of them actually is. 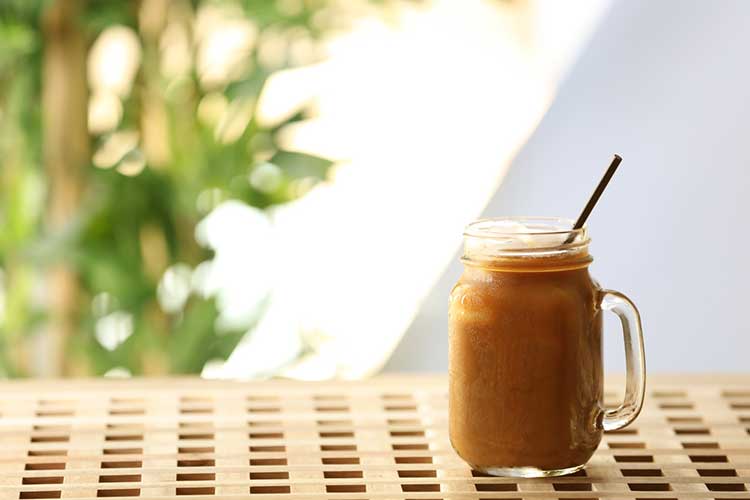 What is a Latte

A latte is an espresso-based drink that combines espresso with steamed milk and a little bit of foam on top. The ratio varies depending on the cafe you’re at but generally, it’s 1 part espresso to 2 parts milk.

This is different from a cappuccino which is 1 part espresso to 1 part steamed milk to 1 part foam for a stronger coffee taste.

What is a Frappe

A frappe is a combination of instant coffee (usually) with ice and a splash of milk that’s then blended. That’s the original type of frappe anyway since Starbucks popularised their Frappuccino there are hundreds of little variations across all the different coffee shops that serve them.

But coffee, ice, a blender, and usually some sugar syrup are the core of the frappe no matter where you go.


And did you know in Boston a Frappe is a milkshake? That’s where the original frappuccino came from, a small coffee shop chain that combined a cappuccino with a milkshake. That chain then got bought over by Starbucks and voila, the frappuccino you know and love was born.

Now onto the differences…

Differences Between Frappe vs Latte Explained

As I said at the start of this article this is the core difference between the two, Frappes are always iced and are always a welcome and delicious drink in the summer. Nicely cools you off and leaves you refreshed.


Lattes however are served hot, unless you’ve ordered an iced latte which is a latte served over ice and is again different from a frappe. I’d say they’re nice in winter but it doesn’t matter how hot it is, I will happily drink a latte.

Do you know what is going to be disgusting? A strawberry Latte…

Or blueberry, or any other fruit flavor, it’s just not going to be enjoyable with an espresso shot.

But a blended up milk drink, without coffee, that’s strawberry flavored? Now that’s going to be delicious.

And there lies a key difference, you can get Frappes flavored with different fruit syrups but in a latte, you’ll get other flavored syrups added, vanilla, hazelnut, caramel, stuff like that but never fruit.

Frappes don’t always have coffee in them

As I said above you can have Frappes without coffee in them that are flavored with syrups, but if you took out the coffee in a latte you’ve just got a glass of steamed milk…

But interestingly what we know as a latte is actually a cafe latte, which is Italian for coffee with milk. So if you went to Italy and ordered a latte, you’d be given a glass of hot milk and a very strange look.

If you went to a cafe and ordered a latte and saw them start boiling a kettle you’d be worried.

Lattes are made with Espresso, anything else simply isn’t a latte. For my wife and I in the morning, I make fauxccinos with a Moka Pot and a milk frother, but that’s a faux-cappuccino, it’s not a real one we just like it and it’s a nice easy way to have it at home.

Frappes, however, are made with instant coffee, when they have coffee in them anyway!

A lot of the big coffee chains have their own flavored “frappe powder” that they add to make the signature frappe taste but the original frappe was made using regular tinned instant coffee, blended up and served, that’s why the foam would also taste bitter.

There’s no reason you couldn’t make a frappe with an espresso, it’s just that most people don’t.

Lattes have latte art on top

A simple one but lattes that generally have a small layer of foam on top that experienced baristas can shape into hearts, leaves, or other fun patterns. Fair warning, it’s not easy!

Frappes are from Greece, Lattes from Italy

The Cafe Latte was invented in Italy (as I’m sure most people would guess) but I was surprised to find out that it was invented around the 1950s, I assumed the latte had been around a lot longer than that, still 70 years I suppose but still.

The frappe on the other hand was invented in Greece by a Nescafe worker in 1957, it was a drink blending instant coffee (Nescafe coffee I’m sure!) with milk, sugar, a little water, and usually ice. It was served with a straw because the foam that appeared on top was usually quite bitter tasting.

Lattes were taken to America around the 1980s and popularised through the 90s leaving us with the ubiquitous drink we know today. But Frappes took a little longer to spread (probably because that version doesn’t taste all that good, just saying…) But it was the Athens Olympics in 2004 that found them springing to popularity and starting to spread from there across the globe.

Frappes are whisked or Blended

The only mixing that goes on in a latte is that the milk gets poured over the espresso shot allowing them to mix.

Frappes however are almost always blended in a blender but sometimes they’re made with a whisk, though this is usually at home. That’s how they get frothy milk rather than with a steam wand like you’d use in the milk for a latte.

The main difference is still that the lattes are hot while frappes are cold, but there are actually a lot more subtle differences involved. And for me, the modern frappe, filled with sugar syrups and higher quality coffee far surpasses the traditional version made with instant coffee.

Although if I were in Greece sitting out in the sunshine looking out over an ancient Greek temple on the roadside I’m sure I’d be quite happy sipping away at the straw in my Frappe!