This is one of the most fun coffee purchases I’ve made in a while.

My mornings have been transformed by using this and a Moka pot together to make easy cappuccinos for my wife and I. 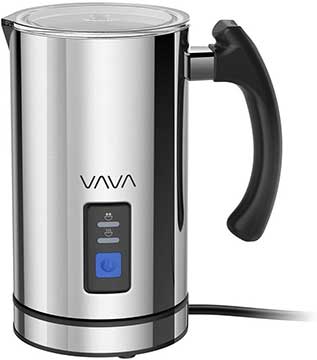 Pros of the Vava Milk Frother

As far as dislikes there haven’t been any yet, I know some people complain about the film that gets stuck to the bottom after use, but who cares? You’re going to have to wash it anyway because it uses milk, and even to make 2 cups it doesn’t take long to rinse out between uses.

I guess the only thing that qualifies as a negative is a fact that it’s quite tall and milk only fills up half of it once it’s frothed. But you have to have the heating element and motor to spin the frother somewhere so this isn’t so much a design flaw as a design necessity.

Pros of the Vava Milk Frother

Heats and froths the milk

This is why I chose this one over a lot of the others when I was buying a milk frother, the ability to heat and froth the milk. I didn’t want the hassle of having to get a different pan to heat the milk, and then forth it, I think it’s an extra step that would have turned it into a hassle and stopped me from using it daily.

But the fact it does both makes it much more accessible which is why it’s now my morning go-to.

Clean up under the tap only takes a few seconds

A lot of reviews on Amazon are saying they find it difficult to clean, but that has been so beyond my experience it’s not even funny. You just rinse it under the tap, remove the whisk and wipe the bottom with a cloth under the running water.

It takes 15-30 seconds and literally couldn’t be any easier.

You even get a little brush to clean out the whisk with so you can get right in and amongst the wire.

Difficult to clean… Nonsense I say!

Nothing will give you more respect for the job of a barista than trying to steam your milk with a steamer wand, it’s not easy. And as you start to get the hang of it you start to realize that it can be a bit hit or miss if you don’t know what you’re doing.

But the Vava lets you easily repeat results every single time you use it. Unless you’re like me and you turn it on forgetting to put the whisk in… Definitely my fault not theirs!

This is one of my favorite parts, so many of the electric milk frothers are round, and pouring effectively out of a round vessel is not easy… At least if you’re me, I always end up spilling it, or the froth doesn’t come out properly.

So just a little spout adds some class to it and lets you get a proper pour out of the device.

You won’t be making latte art or anything but it’s a nice feature that you’ll be glad to have.

Cons of the Vava Milk Frother

I don’t particularly have any cons so I took to Amazon to find other people’s thoughts for a more balanced review, I found a couple worth mentioning below.

I also found one review where a person filled it to the top and then frothed milk everywhere, so be warned, if you use it wrong, it doesn’t work properly…

This is a fair complaint, it is a single-serve milk frother making enough for 1 good-sized cup of coffee. Which if you combine with it needing washing in between uses is a bit of a pain.

I’ve got around that by either using smaller mugs for my wife and I in the morning, or I make her a cappuccino because she likes milky coffee, whereas I like black coffee so I make something resembling a flat white or a cortado with the leftover foam and splash of milk.

There aren’t any 2 serving milk warmers and frothers so if this was a deal-breaker better going for a milk whisk and heating your milk in the microwave or a pan.

This one makes sense. Because when you first look at the Vava the first thing you notice is that it’s got 2 max lines and one min line.

Fill to the upper max with the whisk and you’ll get milk spewing all over your countertop!

Best Way to Use It to Make Cappuccinos

The best way you’re going to get a cappuccino out of this is by combining it with some very intense flavored coffee.

Espresso if you’ve got access to it but if you do you’ve likely got a steaming wand and don’t need this.

So you need something else, your drip-coffee machine isn’t going to cut it, even if you pack in the coffee and use a “strong setting” it’s just not going to make coffee that’s strong enough.

My go-to recommendation is the Moka Pot, superb strong coffee made the Italian way to be espresso-like, strong bold flavor, made on the stovetop.

I have a 6 cup Moka Pot which is a little excessive in size for two people but I do like the big coffees it makes.

Your other choice is the Aeropress, but I like the Moka pot better because you can leave it on the hob to keep hot while you get your milk ready and it won’t brew anymore.

Tips and Instructions For Using The Vava Milk Frother

This is the biggest tip I’ve got for using it, I’ve noticed if I make the milk froth, and then make the coffee by the time I pour the milk it’s gone a lot more rigid and the foam is a lot stiffer.

Which isn’t the end of the world of course but it means you need to spoon on the foam and it doesn’t sit the nicest on top.

If you pour the milk as soon as the red light starts flashing it pours out perfectly and you get a nice flat layer of foam at the top of your mug.

Using It To Make Hot Chocolate

It heats and froths the milk so the key is… Put your powder straight in the frother!

And the result is wonderful. Fluffy hot chocolate warmed to the perfect temperature without burning it.

The way I use it is to fill it up the max stirring line, add half the powder for two mugs, warm it and add it to two mugs. Then add the max line for frothing, add the other half of the powder, and pour that on top.

If you go all froth you don’t get a lot of drinkable milk, it’s almost all froth. So this is the best way, and you can do it by halving the amounts if you’re just making one cup. Or get yourself a bigger cup of course!

What The 2 Max Lines Are For

Just to be clear, the upper max line is the maximum amount you can put into heat milk without frothing it. You use the smaller attachment so that it doesn’t burn to the bottom and it whizzes round without any froth.

The lower max line is the max amount you can froth with the whisk attachment. And it doesn’t take it being much over that line to spill out the top. Because there’s a slight seal on the lid it seems like it won’t spill out but trust me… It will…

I filled to the lower max line, then put in hot chocolate powder forgetting that would then raise the amount of liquid. Hot chocolate eeeeverywhere… But it wipes up and no harm is done.

How To Froth Cold Milk In The Vava

This is not obvious, especially if you’ve bought one-second hand and don’t have an instruction manual. But all it is is holding down the power button until the bottom light turns on only. The upper light does not turn on. Easy.

If you need replacement whisks you can buy them on Amazon here.

But if you buy the Vava new you should find that you get a second of each whisk in a second packet. But have no fear if you lose/break them too, you can buy spares.

Can the Vava froth half and half?

Yes, it can indeed, it won’t do a great job with fat-free half and half, no fat-free milk froths very well, it’s the fats that allow the froth to form and stay there.

But yes, it can froth regular half and half.

What about nut milks?

The same rules apply for nut milks, it doesn’t do as good a job because the fats are made up differently, but yes it can indeed froth up nut milk and any other type of vegan milk you want to put in it.

What about other models of the Vava Milk Frother

There are older models of the Vava, and while they’re fine and do a good enough job, for the sake of an extra $10 you are much better off going for this model.

You can probably tell how much I love this thing. I’ve used it at least once a day every day since I bought it. Honestly a game-changer and well worth your money, I can’t recommend you buy it enough.

Click here to see and buy it on Amazon