Who Invented Coffee? (and where should we send the thank you card?)

There are so amazing inventions out there. With the iPhone, solar panels, and self-driving cars, it’s incredible to think that all these wonders of technology were once just a thought, an idea in someone’s mind.

The other day, I was looking at my espresso coffee maker, fascinated by all the pipework, dials, and intricate details. How did someone have the idea to put all this together?

This got me thinking about espresso. It’s such a strange way to brew coffee by rights, it shouldn’t exist at all!

Now my brain was running wild, never mind espresso, who was the first person to take the raw coffee bean, roast it up, grind it into powder, and then brew coffee?! I can’t imagine a scenario where I would find myself doing this out in the wild. I need a coffee cheat sheet to brew the stuff even with all our modern-day devices!

I had to know the answer, nothing would satisfy me now until I discovered who invented coffee, why did they try it in the first place and what is the history of this famous little bean.

Coffee wasn’t invented so much as it was discovered. The exact person that discovered it remains tied up in mythology with some saying it was Kaldi of Kaffa (modern-day Ethiopia) and some say it started in Yemen. The truth is buried in history but the fact remains, whoever discovered it did the world a wonderful favor! 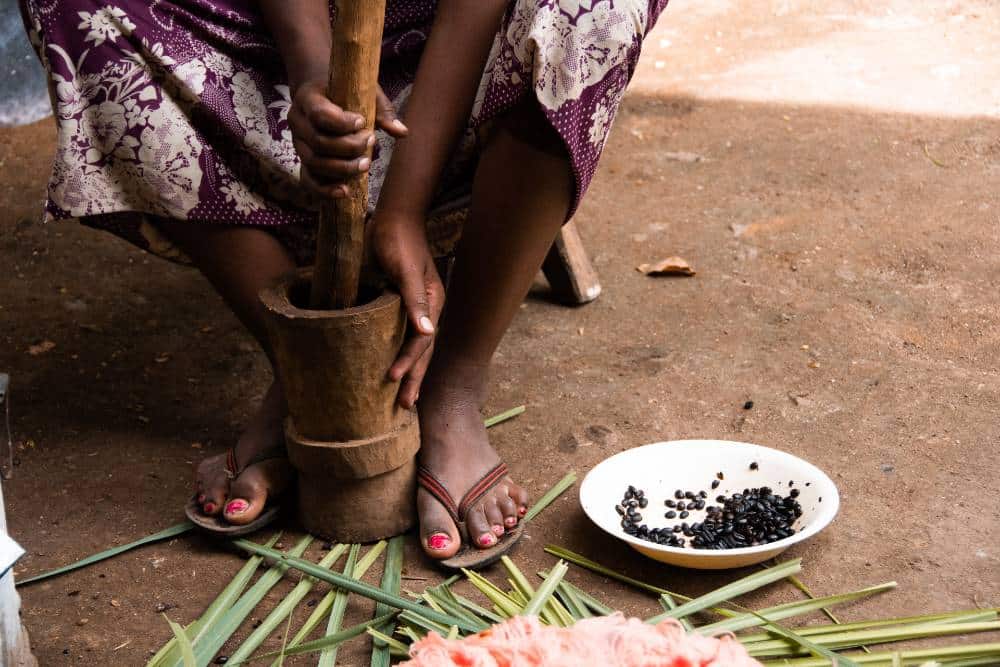 Our tale begins a long time ago, around the 6th century AD. The plant that grows coffee berries is native to southern Africa and tropical Asia. The most sought after, Coffea Arabica coffee plant is native to the Ethiopian highlands so that’s where legends of the origin of coffee emerged.

The legend is set in the Kingdom of Kaffa, which was located in modern-day Ethiopia. A goat herder named Kaldi was tending to his herd when he noticed that the goats were behaving strangely. They were much more active than usual and frolicking around so much that he became suspicious they had been possessed by the devil.

After closely monitoring the goats, he noticed that they were eating unfamiliar red berries before they had these energetic episodes. Either bravely or stupidly, he decided to try these berries himself. He was amazed to discover that these strange fruits brought on a wonderful boost of energy as well as a clear and sharp mind. Anyone who passed by noticed that he was the most alert and happiest goat herder around.

A passing monk noted Kaldi and his abundant energy levels and this sparked the monk’s interest. He found he was frequently falling asleep during prayers and he was desperate to remedy this. Kaldi showed him the coffee tree and the red berries and the monk was delighted to find that they kept him awake and able to pray for hours in the way he had always wanted to.

The legend goes that this monk was the first person to extract the coffee beans from the fruit and boil them in water to brew the first-ever cup of coffee.

Another version of the tale goes a bit differently. Some say that when Kaldi discovered the coffee berries he rushed to the nearest village to share his findings. After presenting them to the place of worship the monks deemed them to be the devil’s work and threw the coffee berries into the firepit. As the beans started to roast, a wonderful aroma filled the room.

This lead the monk to retrieve the beans from the embers and he ordered hot water to be poured over them to preserve this wonderful smell. The cup of coffee this created was so enticing that the monks drank it and experienced the wonderful flavors and even more incredible after-effects.

As with all legends, there’s no one correct way to tell this story. The myth is found across western literature and odes to Kaldi are found such as ‘Kaldi’, the biggest coffee chain in Ethiopia. 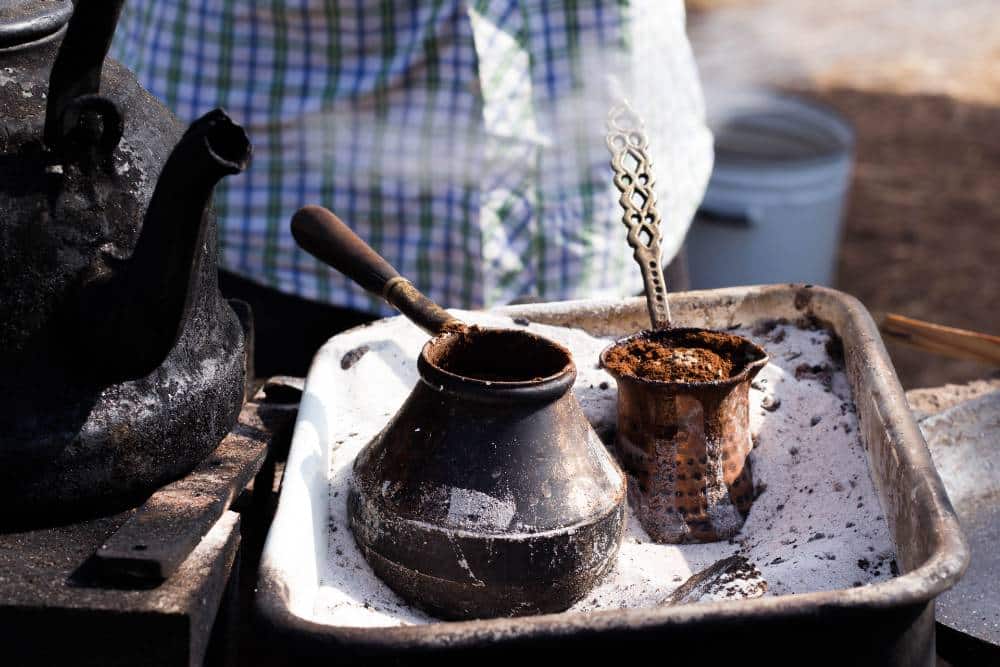 Spread to the Middle East

The legend of Kaldi and his dancing goats is the earliest record of coffee being enjoyed as a drink. Some contest this theory and state that coffee actually originated in Yemen. As early as the 15th century in the port of Mokha where the Sufi was said to have brewed the world’s first cup of coffee.

Another potential origin point for the history of coffee starts with an old legend that tells the tale of Sheikh Omar who was known for his healing skills. He was once exiled from Mocha in Yemen and sought refuge in a desert cave near Ousab. Extremely hungry he found some red berries on a nearby bush and tried these. He found the taste to be very bitter so he tried roasting the seeds in the hope that this would improve their flavor. Thus, the first roasted coffee was created. The beans were now far too hard to eat so he attempted to soften them by adding them to boiling water. The roasted beans imparted a deep brown color and the liquid gave off a wonderful aroma. After drinking this, Omar was revived and when news of this ‘miracle cure’ reached Mocha, he was invited back and was made a saint.

The Arabs have a long history associated with coffee and the beans spread far and wide around the Arabian peninsula and beyond. By the 16th century, coffee was known in Persia, Egypt, Syria, and Turkey. Coffee houses were springing up in major cities around the middle east. For a while between 1512 and 1524, coffeehouses in Mecca were banned as they became a place of concern for political gatherings. 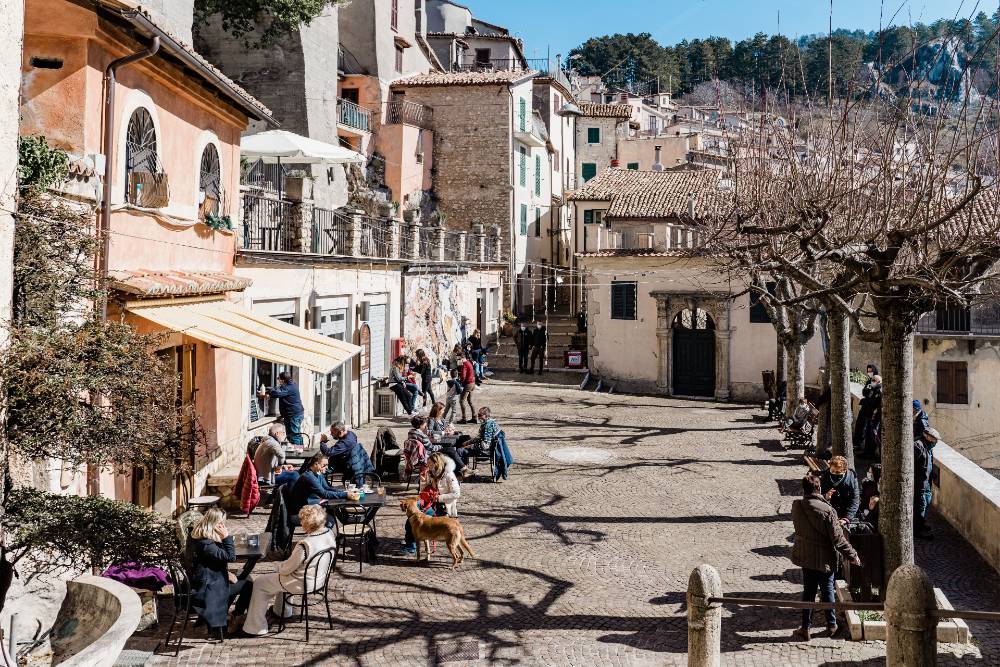 By the 17th century, coffee had arrived in Europe. Its strong aroma and intense after-effects made a lot of people very suspicious of the drink, so much so that the local religious leaders in Venice banned coffee when it arrived in the early 1600s. This caused so much backlash that pope Clement viii was asked to step in and assess the drink. Thankfully, after trying coffee, Pope Clement found it to be quite agreeable so drinking coffee was allowed.

The first coffee house in Europe opened in Rome in 1645 but it didn’t serve coffee as Italians know it today. As difficult as it is to imagine Italy without coffee, the Italian espresso isn’t an ancient relic in coffee history. It first emerged as late as the late 1800s or early 1900s.

The first coffee houses were starting to be founded in England, Austria, France, Germany, and Holland. Supposedly, coffee was introduced to France following the Battle of Vienna in 1683 where coffee was found on the defeated Turks. From this failed Turkish invasion, the taste for coffee spread far and wide and by the end of the 17th century, there were over 300 coffee houses in London.

Midway through the 17th-century coffee was brought across the pond to New Amsterdam, later named New York by the British. Tea was still the drink of choice for nearly a hundred years until the famous Boston Tea Party where the colonists revolted against the tax on tea by King George III by dumping all the tea in the harbor. This led to coffee being the preferred beverage in North America and ultimately gave rise to large coffee shop giants like Starbucks. 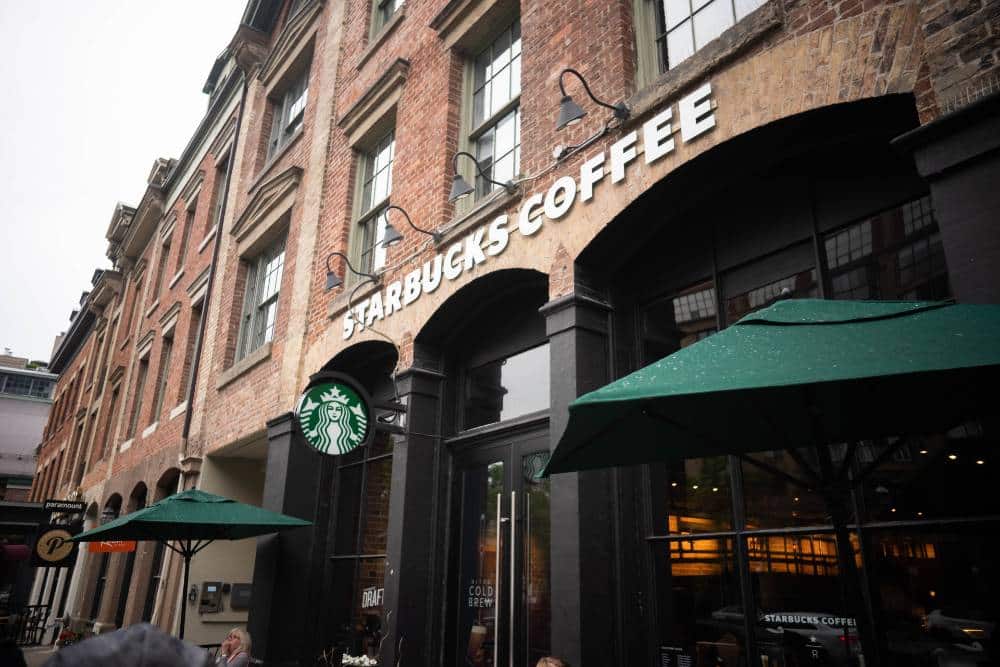 With its popularity on the rise, this created a drive for coffee producers to set up outside of Arabia. The Dutch were the first to successfully manage this endeavor as they managed to plant and grow coffee seeds in Batavia on the island of Java, known today as Indonesia.

Coffee seeds were gradually introduced to the Americas by the late 18th century and the plant’s survival largely depended on the growing conditions. A French man called Gabriel du Clieu took the seeds to the Caribbean French territory of Martinique in the 1720s where the plant thrived. It also took well to the south and central American countries like Brazil, and Colombia.

So that’s it for the invention of coffee. Maybe it was a slightly mad goat herder from Kaffa with help from a herd of goats and a sleepy monk or maybe it was an exiled Yemeni man, starving in a cave. Whoever really invented it, we will never know. The only thing that’s certain is that I am eternally grateful to whoever it was. Coffee is wonderful stuff and without it, the world would be a much sadder place to be.