Where Do Coffee Beans Come From?

Have you ever sat down to enjoy a freshly brewed mug of java and considered how lucky you are for being able to enjoy the luxury of this wonderful elixir. If you’re like me, you may not have realized just how lucky you are. I always took my morning cup of joe for granted. The delicious, rich flavor is so easy to enjoy without ever needing to consider where your coffee started out its existence.

One day, many years ago, I was drinking coffee in my favorite local coffee shop when I noticed a picture on the wall I hadn’t seen (or paid attention to) before. It was of a luscious green landscape with mountains in the background and a basket filled with red fruit in the foreground.

After a few moments of meditating on this landscape, I quickly came to the conclusion that I knew nothing about the origins of coffee or where this scene fits into the story. I realized so many people must depend on coffee for their income and here I was, happily consuming it without understanding the first thing about its origins.

From that point on I was determined to find out where coffee comes from, how they are turned into coffee, and hopefully, never take coffee for granted again.

Since that day I’ve been digging deep. I’ve been researching far and wide to answer these questions and now I’m ready to share my findings so you can join me in understanding more about this fascinating industry and you’ll be able to enjoy your coffee even more with every sip.

Coffee beans come from countries that fall into the coffee-growing region (also known as the coffee belt) of the world. This includes Latin America, Africa, and Indo-Pacific regions. The coffee plant likes conditions to be just right so it can’t be grown everywhere.

Before we get into the specifics, let’s get back to basics and discover the coffee plant, how it makes coffee beans, and where was the first ever cup of coffee brewed? 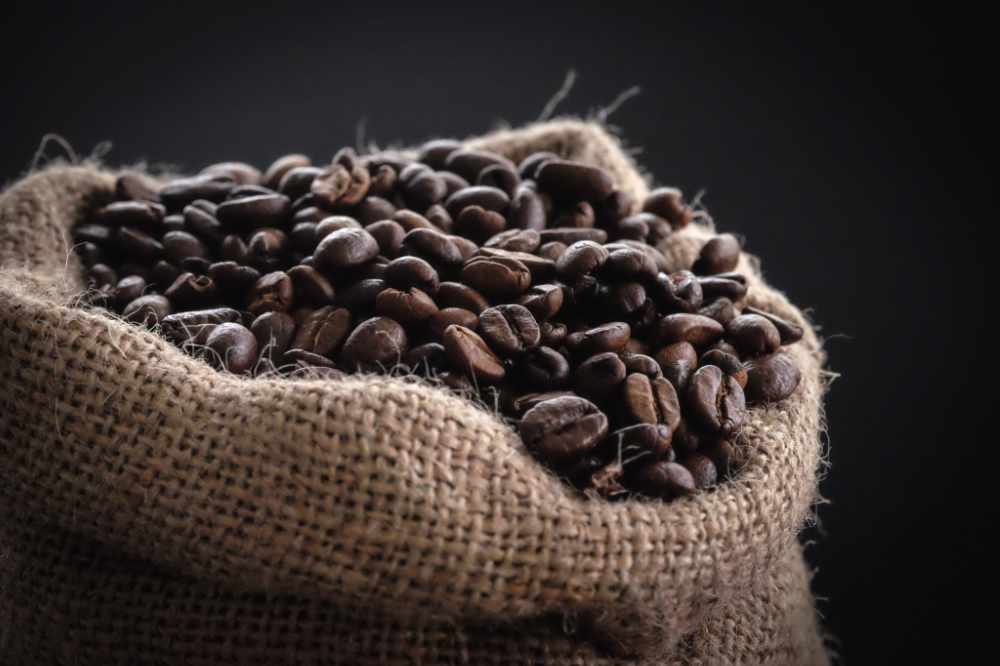 What Are Coffee Beans?

When you think of beans, legumes are typically the first thing that comes to mind. Coffee beans do come from coffee plants but they aren’t actually beans. They are the small, hard, seed found in the center of the coffee fruit. These are called coffee cherries and they really do resemble regular cherries.

The coffee beans, like any seed, contain all that the plant needs to grow into a strong and healthy coffee tree. They contain fats and sugars as well as caffeine which acts as a natural pesticide as well as to attract pollinator species. These elements benefit the plant and also combine in hot water to create the bold and delicious cup of coffee we all know and love. 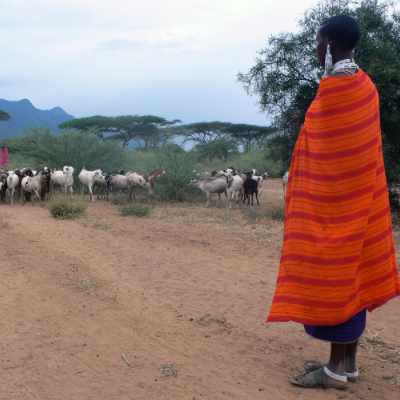 The legendary story of coffee discovery starts in Ethiopia, in the Kingdom of Kaffa, in the 6th century. A goat herder named Kaldi noticed that his goats seemed to be more energetic after eating the red berries of (what we now know as) the Coffea plant.

Intrigued, he tried some of the berries himself and experienced a significant boost in energy. This prompted him to share his findings with the religious leaders in the nearby village. After some consideration, the beans were deemed to be the ‘devil’s work’ and thrown into a nearby fire pit.

The wonderful aroma of the roasting beans shifted the attitude of the monks who ordered the fire embers (and beans included) to be mixed with hot water to preserve this wonderful smell.

Thus, the first-ever cup of coffee was brewed and when the monks tasted this, they couldn’t ignore the wonderful calming effect of the drink followed by the prolonged boost in energy it gave them.

This story is referred to a lot in western literature and Kaldi references are still commonplace in the modern-day world of coffee brand names. 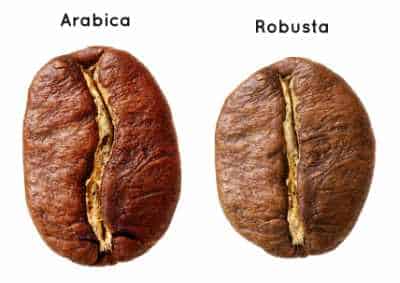 Just as most plants have many varieties, there are different types of coffee plants that have been selectively grown for their different characteristics. The two broad varieties of coffee start with arabica coffee and robusta coffee.

Robusta beans are the widely used term for the species of coffee called Coffea canephora. This species of coffee originated in central and southern Africa. These beans grow well at an altitude of 900-1000m and are fairly hardy to the elements.

The coffee plants flower after 3 years and go on doing so for upwards of 20-30 years. The beans are high in caffeine content and known for their earthy, more bitter flavor notes. They are typically used for espresso (usually mixed with Arabica beans) or for instant coffee as they are cheaper than Arabica coffee beans.

Coffea Arabica is generally considered to yield better quality coffee beans due to its delicate, complex flavor notes. The arabica plant tends to grow best at an altitude of 1300-1500m and is susceptible to climate changes as well as disease. Some varieties of Arabica beans have been adapted to grow at lower altitudes and even sea level which really helps expand the coffee-growing bean belt.

They produce a cup of coffee that’s bursting with sweet flavor notes and often have fruity or floral hints as well. This is due to the slightly higher acidity of the beans as this helps add flavor. 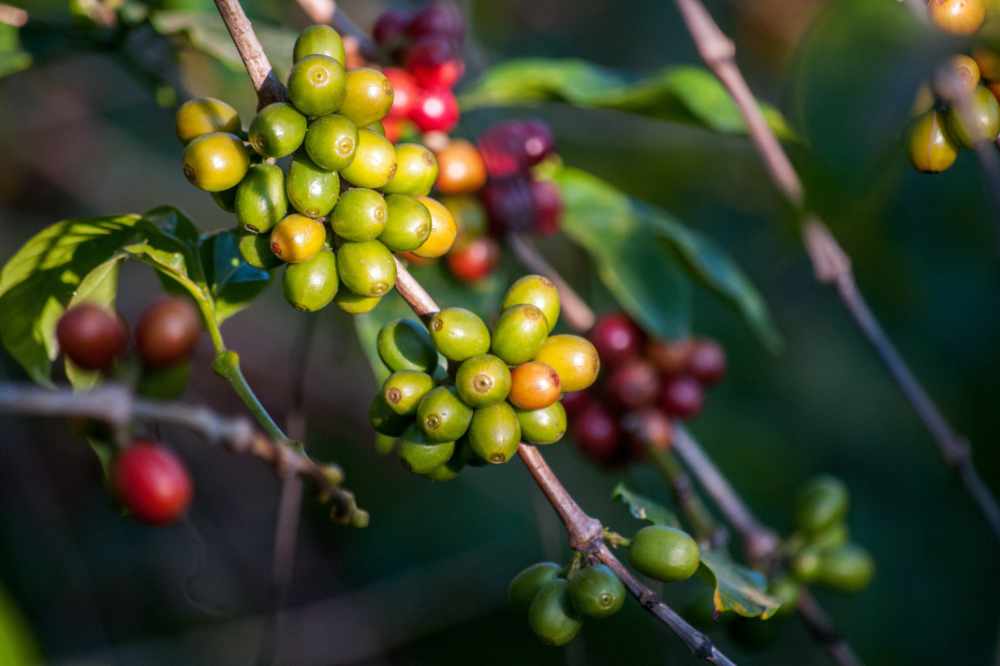 How Are They Grown

There is a lot that goes into coffee production from the growers to the coffee roasters. Coffee is grown on farms or ‘coffee plantations’ where the plants are tended to and the beans harvested and processed ready to be sold worldwide.

Coffee can only grow at a certain climate as well as a specific altitude and there are around 80 countries that can facilitate this. The coffee-growing region of the world is between the tropics of Cancer and Capricorn so includes Africa, Indio-pacific, some select areas of the middle east, and Latin America.

Coffee plants are either grown exposed to the heat of the sun or combined with other plants to create a natural canopy for shade. Non-shaded coffee is less labor-intensive and produces a higher yield due to the fact that all the land can be dedicated to the coffee plants.

Shade-grown coffee better mimics the natural growing conditions of the plant and can produce coffee beans that are richer and tastier so they generate more profit per pound. Coffee shade can be produced with timber trees or other profitable species to help diversify the farm. 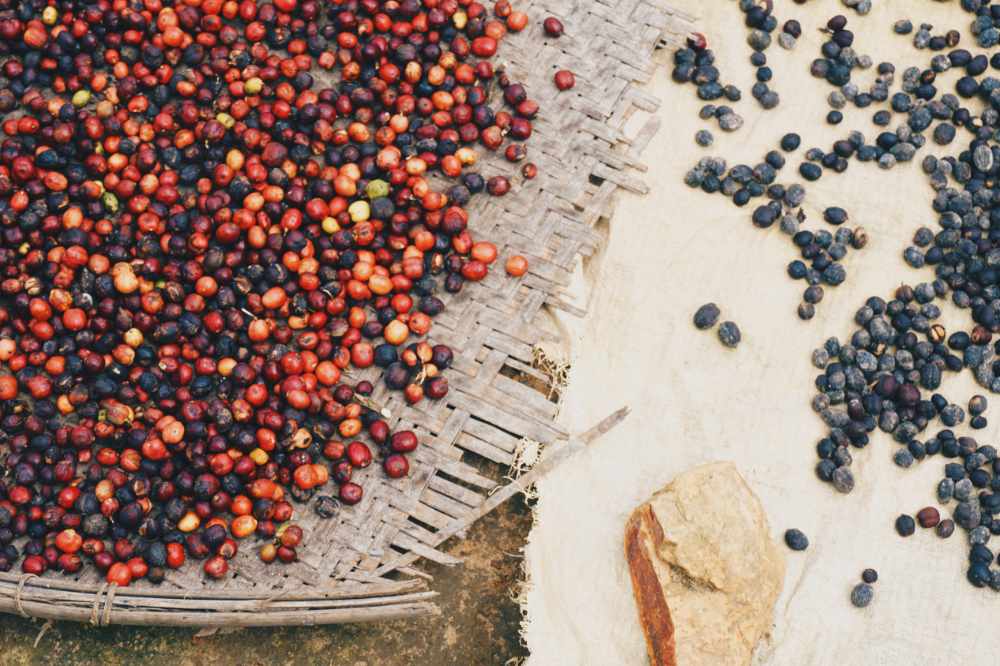 After around 7-9 months of growth, the coffee cherry is harvested and the fruit is removed by a dry or wet process. The dry process involves washing them in canals or large vats before letting them dry in the sun and the wet process involves mechanically removing the fruit and a fermentation stage follows this. The beans are then washed to remove any residual pulp and dried.

This stage produces the green coffee beans which are stored and graded ready for roasting. The beans can be sold as single-origin so all from the same batch or (more often) are blended with other beans to help balance out flavor notes. These are called blends and tend to produce a more consistent flavor over time which is better for large-scale coffee sellers. Single-origin beans are often select, high-quality beans sold at a premium for brewing specialty coffee.

The roasting process usually happens nearer to where the beans will be consumed with some coffee shops doing it in-house.

The time and temperature the beans are roasted for varies to give light to dark roast coffee beans. The longer the roasting process, the beans release more oils and the more delicate flavors caramelize to give richer single-note tastes.

Once the coffee beans are roasted to perfection they are ground up in a coffee grinder and can then be used to brew coffee. Different roasts and grind settings are chosen depending on the brew method. 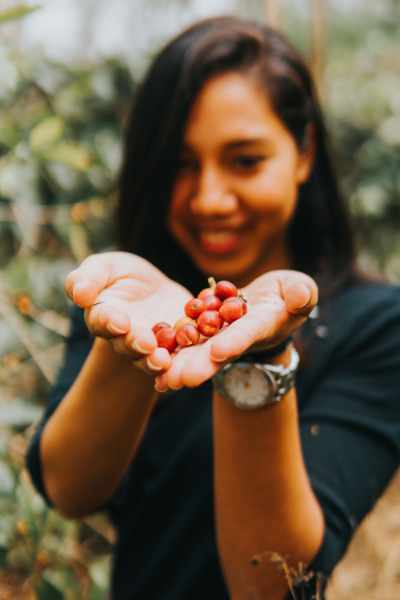 Asia is a large producer of coffee beans with countries in Southeast Asia like Indonesia and Vietnam being prime examples. Vietnam is the world’s second-largest coffee producer and Indonesia is the fourth. India, China, Papua New Guinea, Australia, and Yemen are also important coffee producers.

Africa is another coffee-producing giant with Ethiopian coffee being the 5th largest producer and accounts of 3% of the global coffee market.

So that’s it for our whirlwind tour of coffee beans. Coffee beans come from all over the globe and their journey is not a simple one. Now you know a bit more about the wonderful coffee plant you’ll have a touch more appreciation for how much the beans have gone through before they make it into your next mug of java.