What Is Nespresso Coffee? (Is It A Cup Of Coffee Or Espresso?)

There’s nothing more satisfying in the morning than your first sip of that delicious, rich, dark-brown elixir, more commonly known as coffee. It warms you through and through and gives your brain the buzz it needs to wake up, ready to tackle the day ahead.

Coffee is wonderful stuff and, if you’re anything like me, I’ve got to have a cup in the morning otherwise the day hasn’t really begun.

The only issue with coffee is all the jargon that surrounds it. Not only do we have Starbucks with their frappes and lattes and mocha-cuppa-what? There’s also the coffee machines themselves and the huge variety of ways they go about brewing your morning java.

I’ve heard the term Nespresso being thrown around a lot in the coffee world and I’m not ashamed to admit, it took me a long time to pluck up the courage to ask, what is Nespresso coffee?

Nespresso coffee is a particular brand of coffee maker that uses coffee capsules and high pressure to brew espresso-like coffee. They’re very easy to use and make cafe-quality coffee at the touch of a button.


That’s the short answer but the juicy bit comes next. To find out everything you need to know about Nespresso coffee we will start by looking at its origins and how the machines work before finally learning about all the varieties out there and what kind of coffee they can make. 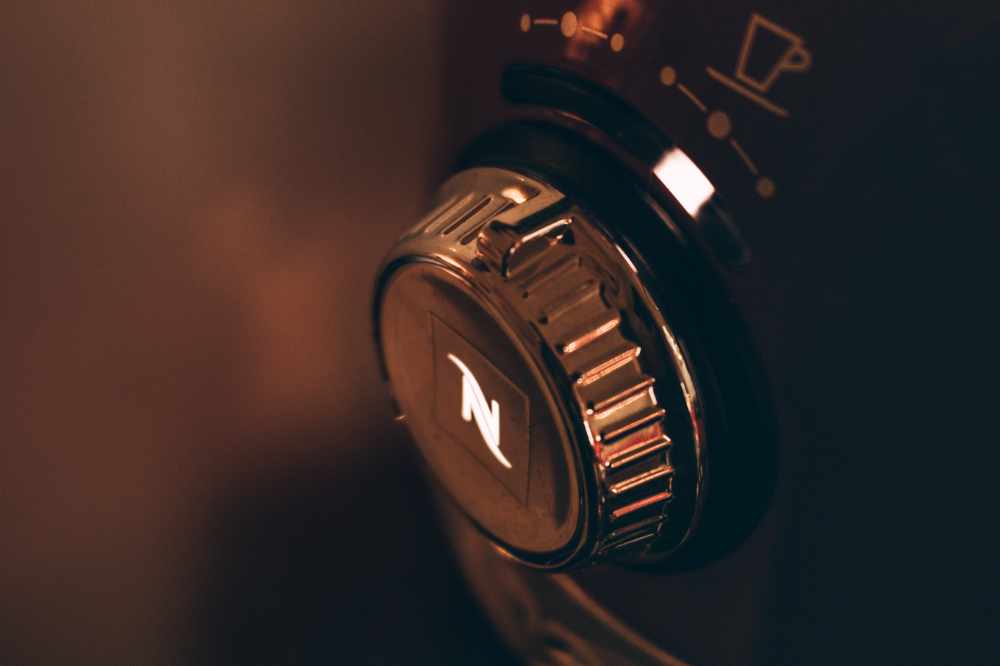 Nespresso coffee describes coffee brewed using a Nespresso machine. These coffee machines were developed by an engineer, Eric Favre, from Switzerland, in the late 1970s. He set himself a goal to brew the ultimate espresso and this took him on a journey all over Italy.

After setting in Rome for a while he discovered one coffee shop was more popular than the rest. It took a bit of quizzing the barista but he eventually learned that they used a clever technique whilst brewing their coffee. They would pull the lever in short, sharp bursts, rather than one long pull. This introduced more air into the process and so releases a better flavor profile. Favre was captivated by this technique and he set about to incorporate this into a streamed process.

He joined Nestle and worked on the packing line to get a real insight into the workings of the company. This put him in a prime position to pitch his prototype Nespresso coffee maker, but the idea didn’t initially catch on. There was the concern that this new machine wouldn’t stand up against the booming sales of instant coffee that the consumer relied on.

It took ten years before Favre was able to launch his Nespresso machine with Nestle Japan. The first machines appeared on the market in 1986 but these were marketed as commercial rather than household machines. Favre was forced to leave Nestle and this set off a series of legal battles over many years.

Over the years, Nespresso has undergone many changes and upgrades to result in the coffee makers available on the market today.

How Does It Brew Coffee? 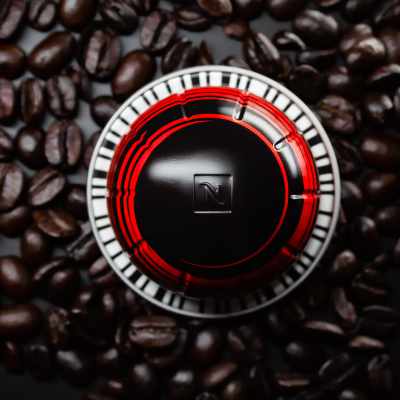 Nespresso has two lines of coffee makers, the original line and the vertuo line. These use slightly different methods to brew coffee but all machines use coffee capsules that contain fresh ground coffee. The capsules are sealed, keeping the coffee fresh and aromatic.

The original line machines use cylindrical/flat-based cone-shaped capsules and these machines use a very high pressure of around 19 bars, alongside slightly cooler water temperatures to brew coffee. The hot water is pumped into the capsule via injector holes in the narrow end.

Alongside this, the machine also uses a needle to pierce the metal capsule, making one large or three small holes in the flat base of the capsule. This allows the brewed coffee to escape into the mug and a safety release system prevents the machine from exploding if this exit route fails.

The original line machines have size option buttons that need to be set to brew the correct amount of coffee.

The vertuoline machines use semi-circular Nespresso capsules that have built-in barcodes that the machine will read to automatically set the brewing parameters. These machines use a unique technique called centrifusion to brew coffee. This is a combination of spinning the capsule at up to 7000 rpm to mix the coffee and water. The machine automatically sets all brewing parameters like speed, volume, infusion time, and flow of water to brew the desired cup of coffee.

Whilst Nespresso machines brew espresso-like coffee with a thick froth on top resembling the crema, they don’t actually brew traditional espresso as Italians would. An espresso machine aims to create around 9 bars of pressure and uses high temperatures to extract coffee. They use fine coffee grounds but these are not too powdery. It takes around 25-30 seconds to brew espresso and it should have a thick, honey-like texture with a complete covering of crema.

Nespresso machines use very high pressure of around 19 bars but a lower temperature. The coffee grounds they use are very finely ground. They brew espresso in around 20-30 seconds so has a wider brewing window. The coffee is a bit thinner than true espresso with a lighter more aerated crema.

Keurig is another brand of coffee maker that use coffee pods to brew coffee. Their K-cup pods look quite similar in shape to the Nespresso original line pods but are bigger. They work by injecting hot water into one side of the coffee capsules and they pierce a small hole in the other side to let it flow out. They don’t use high pressure so make single-serve coffee rather than an espresso type of coffee. 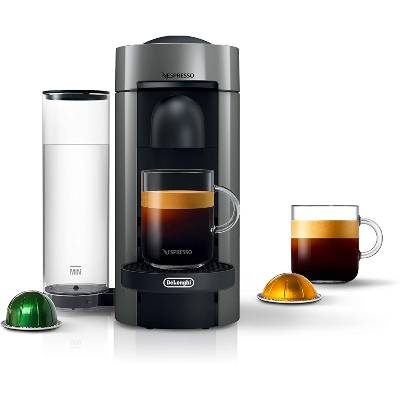 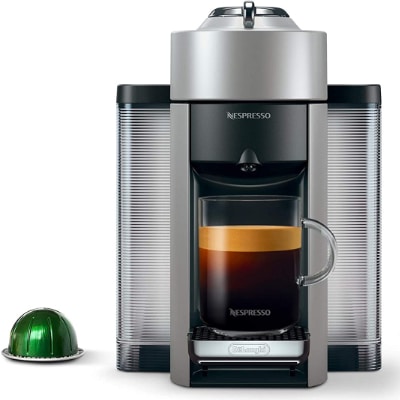 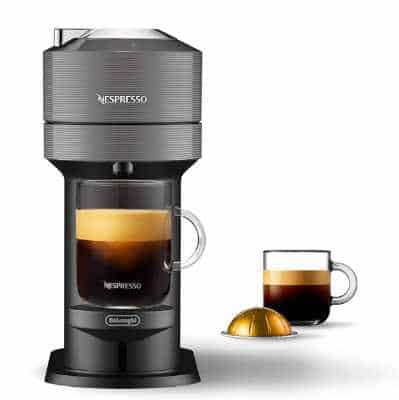 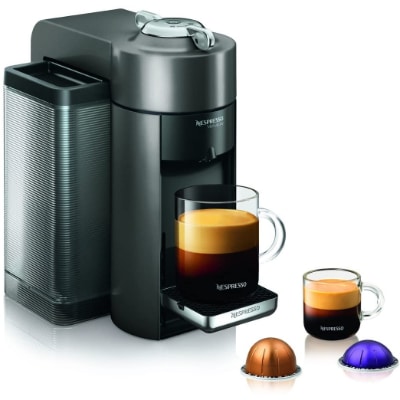 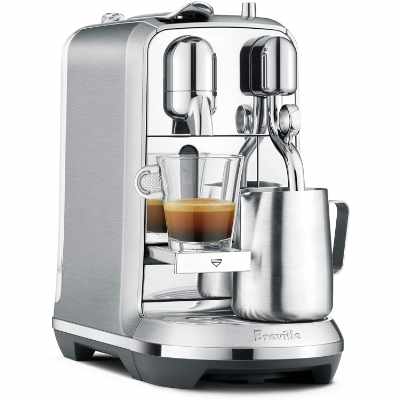 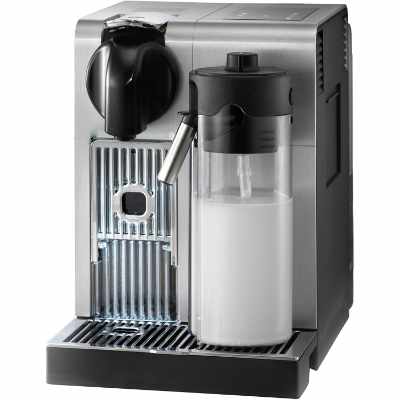 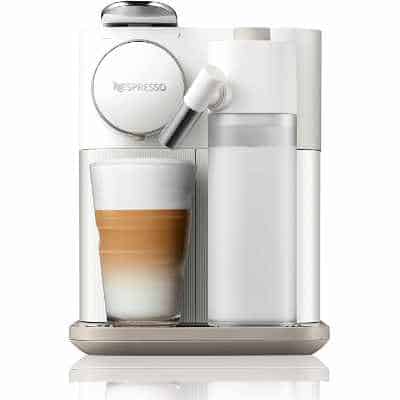 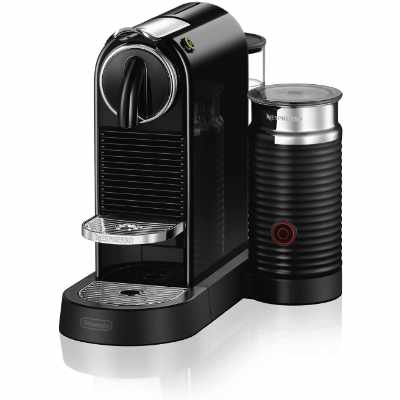 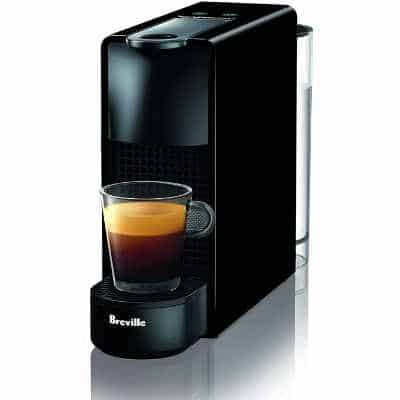 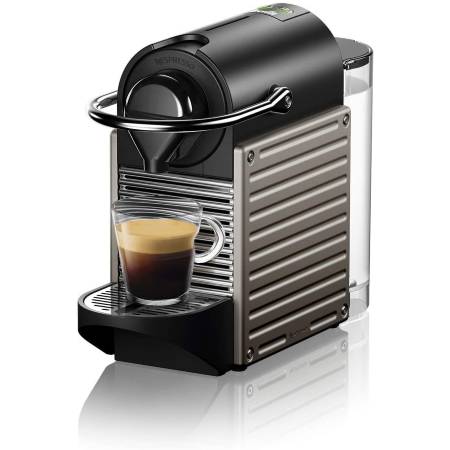 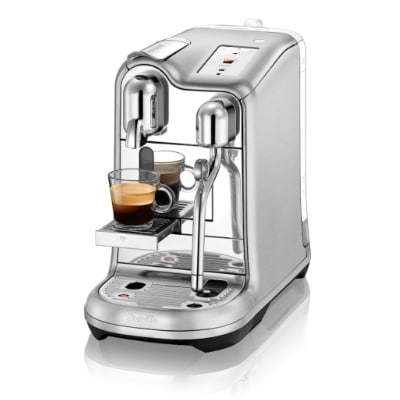 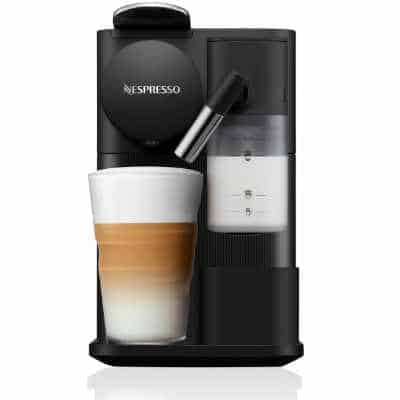 What Kind of Coffee can you Brew with a Nespresso Coffee Machine?

There are many different varieties and blends of Nespresso coffee as they select high-quality coffee beans for their capsules. The taste and aromas depend on the kind of coffee used and every coffee lover has their favorite choice.

Some Nespresso machines have a built-in milk frother so they can automatically brew lattes, cappuccino, and macchiatos.

Nespresso has recently upped its game with regard to sustainability. They make an effort to work with independent coffee farmers to ensure only the best coffee is used in their capsules. The capsules themselves are made of recyclable aluminum and Nespresso has its own recycling program where you can post or drop off your used capsules. The machines are designed with auto shut off so this helps save power if it’s accidentally left on.

How is Nespresso different from coffee?

Nespresso by De’Longhi is the brand name of a style of coffee brewer. They brew capsules of coffee using high pressure to create an espresso-like cup of coffee. The capsules keep the coffee grounds fresh and the pressure helps release a tasty aroma. It’s a slightly different method than brewing regular coffee but is very easy to do.

Is Nespresso stronger than coffee?

Due to the high-pressure extraction, Nespresso machines produce coffee with a stronger flavor compared to regular coffee. It’s espresso-like in strength but a bit less intense.

Nespresso uses regular coffee beans in their capsules, the same beans you buy from coffee roasters, grocery stores, or Starbucks.

Why is Nespresso coffee so good?

The company selects high-quality, arabica beans to ensure a good flavor profile. The machines use high pressure to extract even more flavor from each capsule.

Are Nespresso pods coffee or espresso?

So that’s it for Nespresso machines. These are the devices that can turn new coffee drinkers into connoisseurs immediately, without any need for barista training. There are so many options out there, there’s bound to be one for every need. Whether you like a gran lungo or a morning latte, Nespresso can brew it for you at the touch of a button. Happy Brewing!