What Is Cowboy Coffee? (A Simple Tradition)

Cowboy coffee is made by boiling coarse coffee grounds in a pot over an open flame, then allowing the coffee grounds to sink to the bottom before carefully pouring the liquid out without the grounds into your coffee mug.

It’s an easy way to make a cup of coffee on the trail because you don’t need filters, you don’t need equipment other than a pot and a cup to drink it from.

There are some slight deviations from that core method that some people claim are more authentic but I’m sure there was no one true method that every single person used back in the day.

It was just about making a cup of coffee however you could. Or a cup of Arbuckles’ as it was known at the time, that was the main brand of coffee and people didn’t realize there were different brands, they thought there were only tins of Arbuckles’ coffee so people started calling all coffee Arbuckles’. 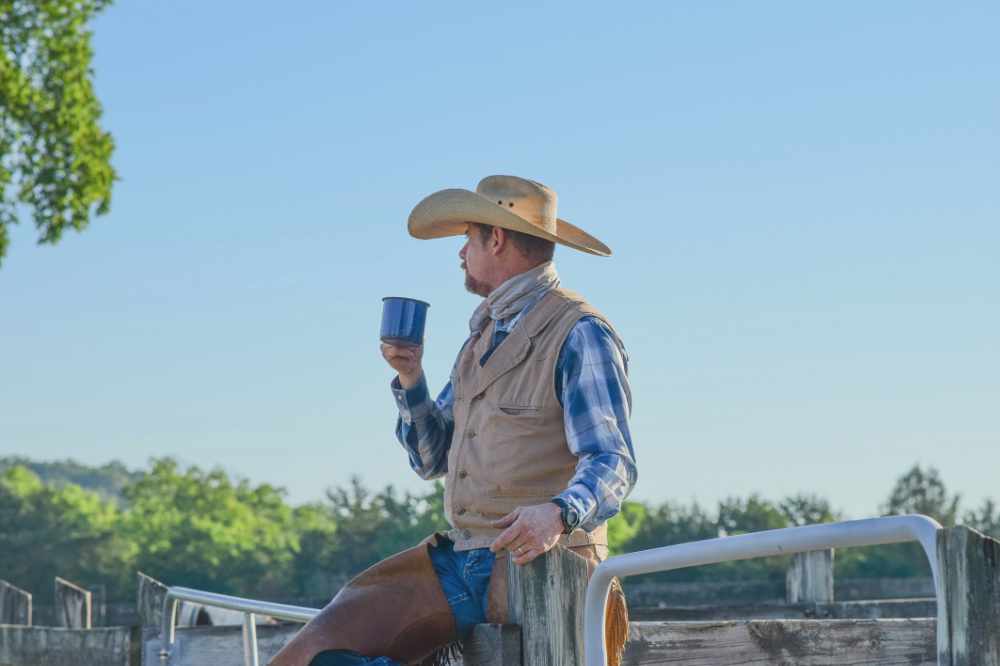 You might be wondering what eggshells have to do with any of this, well I’ll tell you.

Some people claim that cowboy coffee is only called that when you involve an egg too, which according to this book from 1893 is how coffee could be made.

But would cowboys be able to ride horseback across the open plains with a bag full of eggs for coffee that you didn’t eat? I’m not so sure… 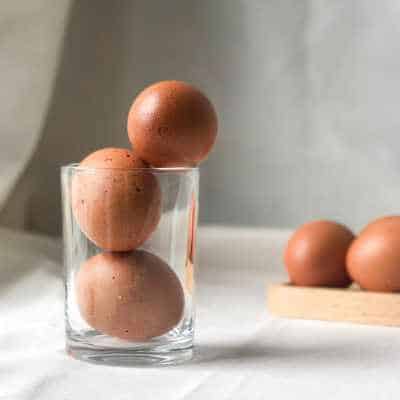 You can either do a whole egg or just the eggs shells but for the whole egg, believe it or not, you’re going to want to add in the whole egg to the coffee grounds, shell and all, and smash it all together before you add your water.

The point is that the egg binds to the coffee grounds and helps them settle to the bottom and it gives the coffee a creamier overall flavor.

As it says in the book I linked to above:

“To make a good cup of coffee is a rare accomplishment. Perhaps the old method is as good as any: a small cupful of roasted and ground coffee, on their Moch and two-thirds Java, a small egg, shell and all, broken into the pot with dry coffee.

Stir well with a spoon and then pour on three pints of boiling water; let it boil from five to ten minutes counting from the time it begins to boil.

Then pour in a cupful of cold water, and turn a little of the coffee into a cup to see that the nozzle of the pot is not filled with grounds. Turn this back and let the coffee stand for a few minutes to settle, taking care that it does not boil again.

The advantages of boiled eg with coffee are, that the yolk gives a rich flavor and good color; also the shells and the white keep the grounds in order, settling them at the bottom of the pot.”

As far as brewing methods go this one is pretty out there, but if you want the manliest way possible to brew a cup of joe I think this has got to be it.

I’m not sure of the benefit of the cup of cold water, other than it will dilute some of the bitterness from the over-extraction, if you pressed down the grounds with a spoon it would do the same thing allowing the grounds to settle.

Perhaps one of the more obscure coffee making techniques but there is something impressive and inspiring about it.

Just the shells is a little easier and a little less drastic, you’re putting the coffee grounds into the pot and throwing in the egg shells before the water.

With the thinking again being that the protein from the shells will bind the grounds together and sink them. Plus you get a little extra something-something from the residual egg.

This is something I read about people sometimes doing in a regular coffee maker, throwing the eggshells in the top with the grounds.

Does it work? It seems to work with cowboy coffee but it doesn’t make much of a difference in a coffee maker, if anything it blocks some of the water from properly soaking all the grounds.

But to me this way would make more sense because you could eat the egg and then use the shell after.

This is always a difficult question to answer because it depends on the amount of coffee you use to how much water, how long you brew it, and how coarse the grounds are.

So in theory yes cowboy coffee will be stronger because you’re potentially leaving it on a rolling boil for 10 minutes, that’s going to brew every ounce of flavor out of it, and if you’ve ground your coffee beans too fine then it’s going to be an extremely over-extracted mess.

But if you opt for 4-5 minutes at or close to a simmer, much like a french press then it’s going to still be a strong bold cup without being over-extracted and horrible.

But what’s strange is either the eggshells or the boiling of the water seem to take some of the acidity away from the coffee leaving you with a surprisingly smooth cup if you’ve left enough time for the grounds to settle to the bottom.

But if you’re having this as camp coffee I can almost assure you it will taste way better than at home with a combination of the exercise to get there, the fresh air, the campfire, and the stars.

Nothing beats the flavor of a coffee that’s been earned. 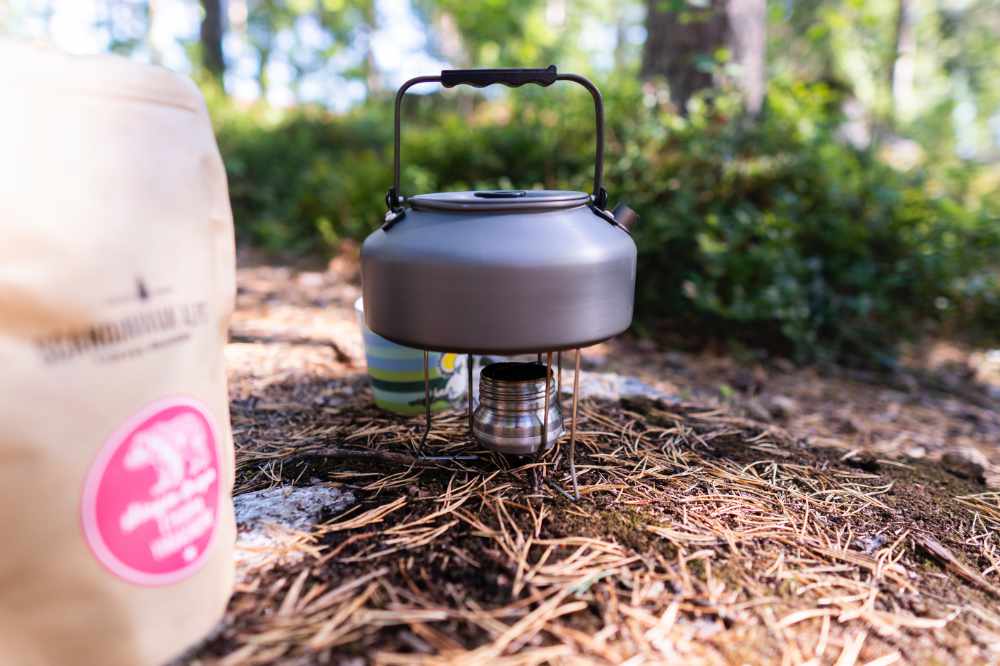 How To Make Cowboy Coffee in 9 Easy Steps

So I’ve talked a lot about the kind of variations of cowboy coffee you can have, but let’s get down to the actual steps you can take to make yourself a cowboy coffee.

That’s all there is to it, once you’ve figured out how it tastes with your grind size you can start playing around with the recipe to make it just the way you like it.

Campers like the portability it brings, you don’t need to bring any other equipment that you wouldn’t be bringing anyway, especially if you pregrind your coffee.

So if you’re going on a camping trip and space is tight this is a great way to enjoy a cup of coffee way better than an instant coffee, all you need is a heat source which you will probably have some sort of access to if you’re going to be cooking.

Other people just like the simplicity of it, coffee grounds, water, pan, heat. Wait 10 minutes and you’ve got yourself a cup of coffee. You don’t get a much easier coffee brewing method, even a french press which is a similar brewing process that involves cleaning out the filter after, running a cloth around a pan is much simpler. 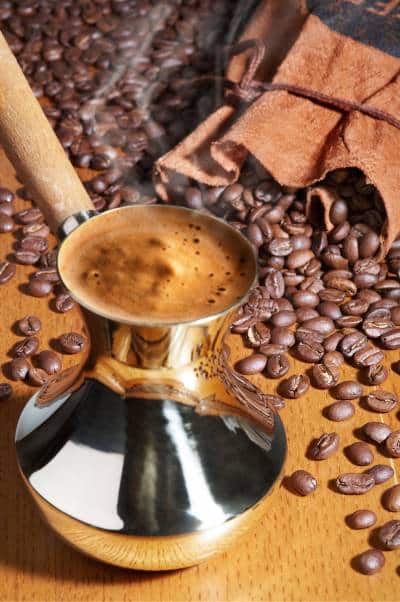 Not as many people know this but if you remove the egg from the equation Cowboy coffee is actually quite similar to Turkish coffee, which is made in an Ibrik, which is a little pot on a stick.

You put ultrafine coffee grounds into the Ibrik and put that over the heat source, usually a stovetop compared to an open fire, while it brews, then you leave it to cool as all the grounds sink to the bottom and you carefully pour it into your cup.

I don’t think there’s any link between the two, I think they were likely thought up completely independently, it’s just the logical way to turn coffee grounds into the coffee. Without being a gritty cup of hot water with beans floating in it.

Alternatives to Cowboy Coffee when Camping

Heading out on the trail but want to keep your coffee free from Egg?

Well, you might not be able to get an espresso machine into your backpack you could get yourself a portable percolator that works on a heat source as an all-in-one coffee maker on the trail. But that still leaves you taking an extra item compared to brewing cowboy coffee which perhaps still remains the best method.

You could even make French press coffee if you were so inclined you’ll need something to boil the water in.

At least both the French Press and the percolator have built-in coffee filters and are still a lot easier than taking a coffee pot on your back. But maybe that wouldn’t be harder than successfully taking a whole egg with you!

Whatever method you choose there are a ton of ways to make good coffee on the trails, even great coffee, and I’d go so far to say that cowboy coffee is great tasting coffee.