What Is Chicory Coffee? (Coffee, But Not Coffee)

Whether you prefer french press or espresso, a latte or a macchiato, the thing these all have in common is the delicious bean they start out life as. The coffee bean is a wonderful ingredient, packed full of delicious flavors and aromas as well as the wonder-drug caffeine and lots of antioxidants.

You may be surprised to learn that you can enjoy a similar experience if you replace the coffee bean with chicory root. This practice, as weird as it sounds, is very popular in some states, but if you’ve never heard of it before then you’ll likely have a huge list of questions.

A good place to start is what is chicory coffee?

Chicory is a herbaceous plant with a tough root system. If you take these roots, roast them and grind them up then you can brew them into a drink similar to coffee. Chicory coffee is either this root mixed with ground coffee or a blend of both.

If you’re like me then this statement creates more questions than it answers. To really understand chicory and why you’d want to make it into coffee read on. We will cover everything you need to know about chicory coffee, its history, and the health benefits and then we will round it off with some common FAQs.

Let’s start off with the chicory plant, what it is, and where it comes from! 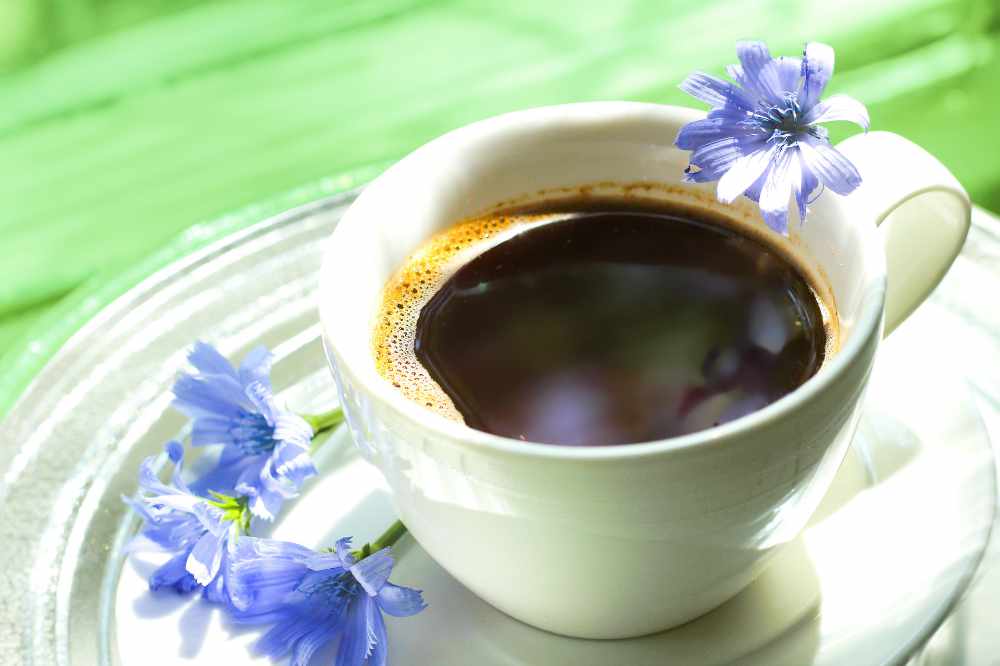 Cichorium Intybus or Chicory is a perennial herbaceous plant belonging to the ragweed and dandelion family, Asteraceae. It’s a woody plant with blue flowers and is native to Europe but is also found in North America, China, and Australia where it was introduced as a forage crop for livestock. It adapted well to these surroundings and, thanks to the plant’s health benefits, is widely used to treat various ailments. 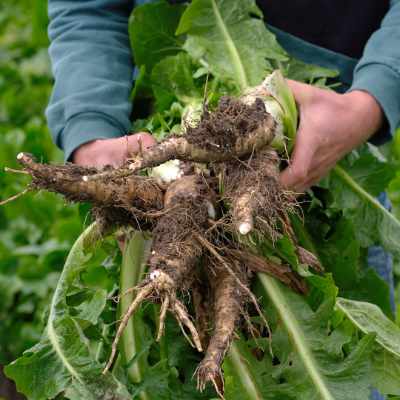 So how did people end up starting with the chicory plant and ending up with a cup of coffee?

The chicory root is a dense, woody texture and can be roasted and ground up to give a coffee-type drink minus the caffeine. Ground chicory root has a diverse history as a coffee substitute so here’s a brief dive into this.

Chicory was first mentioned as a cultivated plant in the 17th century where early records from Prussia show roasted chicory being used as a coffee substitute when coffee bean imports were banned by Frederick the Great.

The French Napoleonic era was next for the historical journey of Chicory coffee where roasted, ground-up chicory root was often found mixed with coffee grounds or replacing them entirely to compensate for coffee shortages. These occurred in France after Napoleon instituted the continental blockade which left the people fine for food but short of coffee. This tradition grew, even when the shortages were replenished and chicory became a major export for France in the late 19th century.

Moving on from France, ground chicory was commonplace during the American civil war as a coffee replacement. In the 19th century, the French founded city of New Orleans in Louisiana had grown to be the countries second largest coffee importer but this was cut off by Union naval blockades. The Louisianans created a coffee chicory blend to help stretch the coffee supplies out and this tradition is still alive today.

Today, France and South Africa take the lead for the production of coffee chicory but the US state of Nebraska is the largest grower of it across the pond. In New Orleans, Cafe Du Monde is a landmark attraction that consists of an open-air coffee shop. They are popular for their cafe au lait and beignets and uphold the coffee chicory tradition with their own brand of the stuff. It’s popular across mainland USA and can be found in large chain grocery stores and even online. 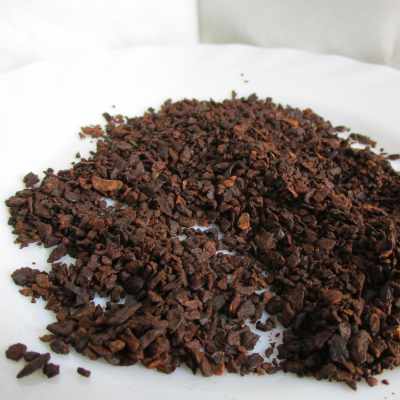 The popularity of coffee chicory comes as no surprise when you consider the potential health benefits associated with the chicory root. Chicory has been cultivated for use in food and medicine as far back as ancient Egypt so it’s definitely not a new discovery.

One of the key components of the plant that has been highlighted for its health-promoting features is inulin. This belongs to the dietary class of fructans which is a type of fiber. It helps feed the good bacteria that live in your intestines making it a potent prebiotic and extremely beneficial for gut health.

It can help inhibit the growth of infectious bacteria and has also been linked to helping with weight loss. It has been shown to stimulate gut movement making it a natural remedy for constipation.

A diet high in fiber is recommended to help lower cholesterol and through this means, chicory may help reduce the risk of heart disease.

A separate benefit of chicory is the caffeine content. If you suffer from anxiety, panic disorders, or just feel jittery after caffeine then you may be a caffeine-sensitive individual. Chicory is naturally decaf so helps reduce your caffeine intake whilst still enjoying that coffee flavor. This is also of benefit for pregnant women or new mothers that are still breastfeeding.

Chicory also contains beneficial vitamins and minerals such as vitamin B6, calcium, potassium, magnesium, and manganese as well as phenolic compounds that work as potent antioxidants.

Despite all these potential health benefits, some people don’t take so well to chicory. It can cause allergic reactions and worsen eczema in some folk. In very rare cases it may set off anaphylaxis so it is worth being cautious over. Most people tolerate the plant very well and as this study shows, the benefits generally outweigh the risks. 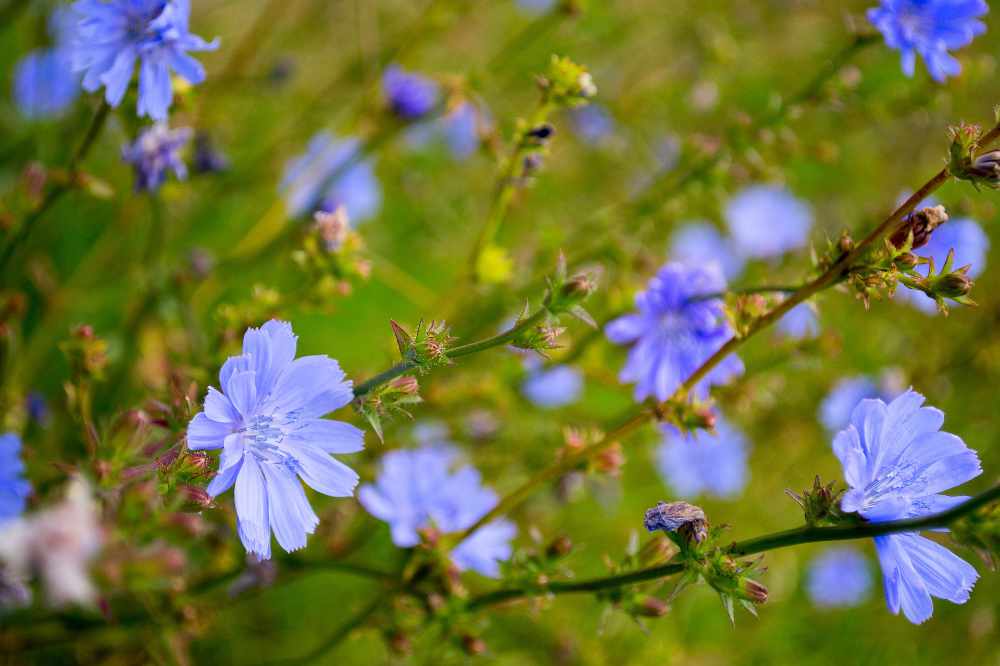 How Does This Relate To Chicory Coffee?

The reality of the situation is the actual amount of chicory, especially the fibrous portion, that ends up in a cup of coffee is pretty minimal. You would need to actually eat the chicory root to enjoy most of these health benefits. The main plus to chicory instead of ground coffee is that it’s caffeine-free so perfect if you’re trying to minimize your caffeine consumption.

Is chicory bad for health?

For the average individual, the exact opposite is true! Chicory is a powerful source of essential dietary fiber and all the associated benefits that accompany this. In rare cases, some people experience allergic reactions to chicory and in these circumstances, it is best avoided.

Pure chicory root made into coffee has an earthy taste that’s similar to darker roasts of coffee but it’s not stronger in coffee flavor. It’s also caffeine-free so defiantly doesn’t give you a stronger buzz. If you’re looking for a strong coffee, try an espresso instead.

What are the benefits of chicory? 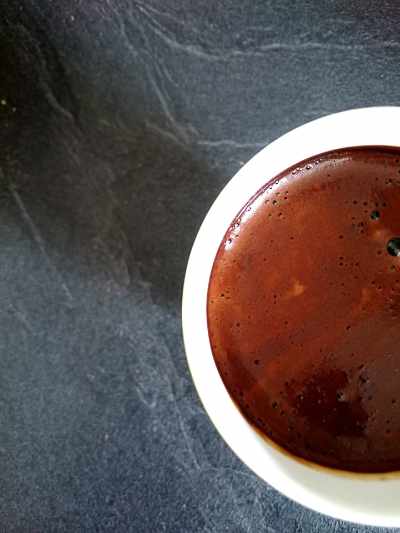 Chicory is high in slow-release carbohydrates also known as inulin. This has been linked to many health benefits such as weight loss, lower cholesterol, more control over blood sugar, and better gut health. Caffeine-free makes it a healthy option for caffeine-sensitive individuals as well as pregnant or lactating women.

Roasted, ground chicory can be brewed into a coffee-like drink so is very similar to a cup of coffee but it’s not the same as coffee beans. It’s a root rather than a seed and has different characteristics but still makes a tasty hot drink.

Does chicory have more caffeine than coffee?

No, chicory is actually caffeine-free.

What is the difference between chicory coffee and regular coffee?

Chicory coffee is either a blend of ground coffee and roasted, ground chicory root brewed into a hot drink as you would with regular coffee or it’s 100% chicory root and no coffee added.

What is chicory used for other than coffee?

Chicory is sometimes used for medicinal reasons to treat swelling, constipation, or for liver and heart health. In cooking it’s sometimes used to flavor or season dishes. The leaves can be eaten as a salad and the root is sometimes boiled for eating.

What is the taste of chicory coffee?

Chicory coffee is said to taste very similar to coffee with prominent earthy and nutty flavors.

Chicory coffee is not a new invention by any means and it has been used throughout history as a coffee substitute for many reasons. It has a taste very similar to coffee and a huge stack of potential health benefits although the evidence for them is not concrete. If you’re keen to try chicory coffee the best place to sample it is in New Orleans where the tradition is alive and kicking to this day.