What is A Breve? (Breve of You to Ask)

While we’ve ordered the cappuccinos, lattes, macchiatos, and on down the menu, the caffe breve is one where many of us may begin to get a little fuzzy. We have an idea that this is something like a cappuccino, or maybe a caffe latte, but may not be able to put our finger on what exactly IT is.

If you’ve had a brush with Italian languages, you know that the word “breve” is an Italian word meaning “short.” Great. But what does that have to do with my coffee… and is it any good?

Breve is actually so good it is considered a dessert coffee. It’s not going to be type wake-me-up-in-the-morning coffee drink. Instead, this drink is usually one you would save for a coffee break later on in the day. It also is a high fat coffee drink which may be another reason it is usually saved for special occasions.

A breve is very similar to a caffe latte, except in this espresso drink, the steamed milk is replaced with steamed half and half. Since milk is lighter in weight (and lower in fat) than half and half, it will fluff up much higher when steamed. Meanwhile, half and half builds slowly and becomes thicker and creamier.

The end result is that half-and-half yields much less foam volume than steamed milk, resulting in a caffe breve being a shorter, stockier version of its caffe latte cousin. This is why this sinfully decadent drink was given the name “cafe breve” meaning literally “short coffee.” 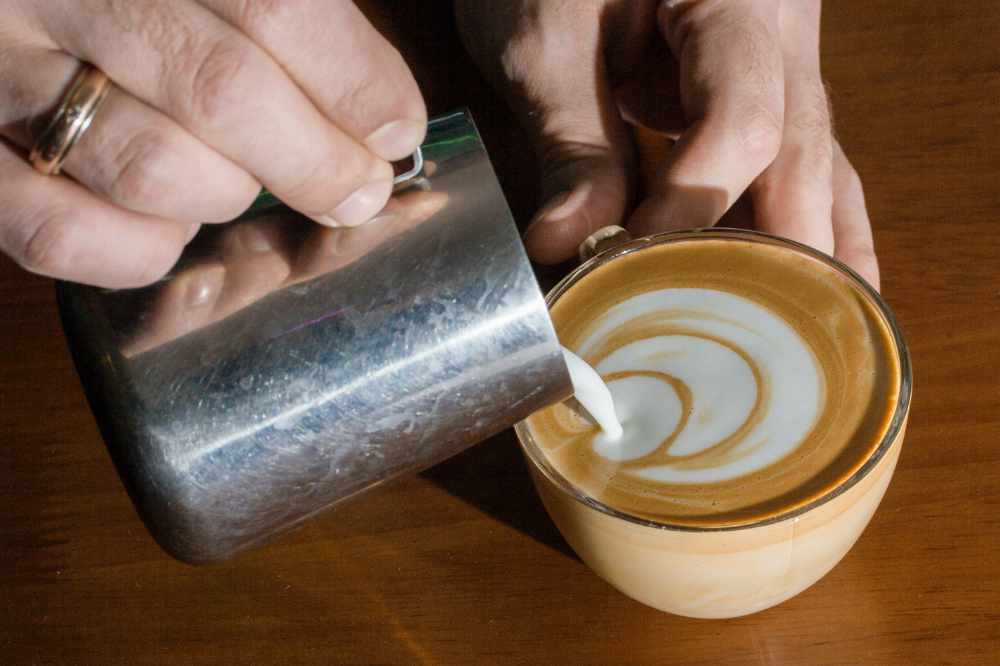 The Origins of the Caffe Breve

Given the name, you would think that a caffe breve would have its roots in Italy… and I guess in a roundabout way it does. This coffee drink was based on an Italian caffe latte.

The Italians use a shot of espresso and steamed milk with a light layer of milk foam on top to make the caffe latte. It seems that Americans tried the latte and thought that it was something great. But any idea can always be improved upon!

For a caffe breve the “latte” or milk part of the Italian drink was replaced with half and half. The Americans then gave this final creamy result an Italian name to sound convincing.

I’d say that whoever was responsible for the first breve was not wrong about it being a great idea! This drink has, for the most part, stayed a native on American soil. And, if you ever try to order a breve at a cafe in Italy, you may just get a blank stare. 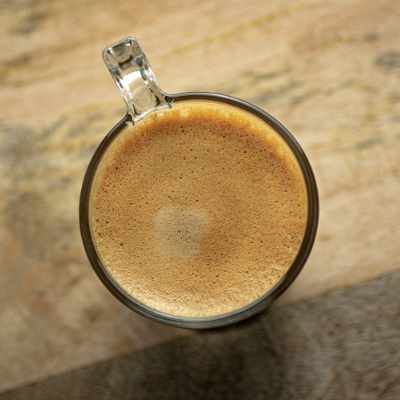 How to Make a Caffe Breve at Home

So how can I recreate an authentic caffe breve at home? For this drink, you will need…

While there is no standard “breve mug,” many choose to use a wide-mouthed cappuccino mug for the breve. As we’ve mentioned, the breve ends up taking up less space in this world than a caffe latte so you won’t need as large of a mug for it. Also, a more bowl-shaped mug allows the espresso and half-and-half to combine nicely as you drink this rich concoction.

The high fat from the half-and-half really pulls the richness out of your beans. For the best espresso, grind your beans fresh before pulling your shot. This will give you that extra punch of flavor that you lack with pre-ground coffee.

While the half-and-half rests, pull 1 or 2 shots of espresso depending on how strong you want your coffee drink. An espresso machine will give you the best result. But, if you don’t own an espressor, you can also use a moka pot or an AeroPress to make your shot.

Check out our related posts on how to make the best coffee using a moka pot or an AeroPress.

Step 5: Pull Out Your Spoon

For this step, you will need a handy dainty-sized spoon. Begin pouring your steamed half-and-half over your espresso and use your spoon to hold back the foam.

Step 6: Top It Off with Foam

When the steamed half-and-half has made its way into your mug, use the spoon to add the creamy foam on top. If you are into latte art, here is your chance to make your signature design.

Or, Make a Cold One

While a caffe breve is generally made hot, it can also be a tasty cold choice for the iced coffee fans. To make a cold caffe breve, you can skip steaming the milk altogether and just pour half-and-half directly over your espresso and add ice.

If you enjoy milk froth, you can use a hand-held milk frother or an Aerroccino to foam your cold half-and-half. 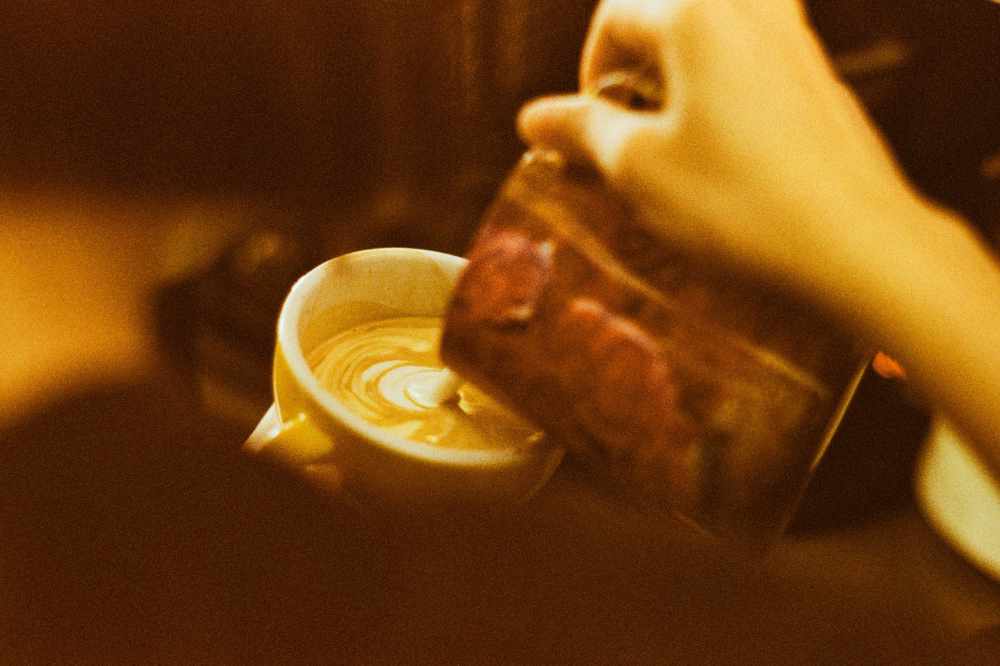 How to Order a Caffe Breve at Starbucks

If you don’t feel the need to try your hand at caffe breve coffee making, there is almost always a Starbucks nearby that will lend a helping hand.

Here are some tips for getting your breve latte how you want it.

A breve has both the fluffiness and the substance. Since half and half is made of equal parts cream and milk, it has a high fat content. The half cream side carries extra fat, which gives the breve more body while bringing out the best points in the coffee flavor. The breve also comes off a bit sweeter than coffee drinks made with milk. In fact, a caffe breve is meant to be enjoyed without sweetener, because it is sweet enough. …Or, maybe because it already has enough calories, as is.

A look at the Calorie Count (Break It To Me…)

So now that we’ve gone on about how delicious it is, it’s time to discuss calories so you can go into this addiction with eyes open.

Actually, you may want to sit down for this…

The Starbucks menu gives us a good standardized ratio on what to expect when we drink a caffe breve. Taking the middle road on coffee cup size, we have a Starbucks grande-sized breve latte at 568 calories vs. a standard grande caffe latte (which uses 2% milk) at 190 calories.

This is a bit of bad news for those of us who are watching our cholesterol!

Drinking a decadent espresso drink? Priceless. Realizing that you just drank 3 times the amount of calories you would have if you had just gone with your regular latte? …Spits coffee back into cup.

The good news is that for those trying out the keto diet, a breve latte is actually on the list of allowed diet drinks (ok, so maybe not in the grande size). While low-fat milk and even whole milk are frowned upon because of their sugar content, half-and-half and heavy cream are on the “ok list.” The keto diet is about adding fat to help burn weight, so it looks like the caffe breve has just found its sweet spot (but hold the sweetener!).

This news right here might make me join the keto club!

The cafe breve/breve latte/breve coffee is an espresso drink that takes all the things you love about a cappuccino or caffe latte and multiplies that joy. At the same time, though, the caffe breve also multiplies the fat content so it may not become your go to coffee beverage for every day unless you are on the Keto diet or a YOLO kick.

Still, I’d say this decadent drink is one of the best coffee drinks on (or off) the menu, and if you’ve never had it, you really should try it… at least once.