Why You Should Add Salt To Your Coffee (Does It Really Taste Good?)

Salt in coffee sounds like a strange combination, right? Although it may sound counter-intuitive to add salt to a drink that is often paired with desserts, putting salt in your coffee grounds can actually give you a smoother-tasting, sweeter brew. But how does this work?

The sodium ions in salt cancel out bitter and sour flavors in your coffee and leave room for the sweet and umami flavors to come through. Salt can fix an over-extracted or burned brew, and make your morning cup more mellow. Adding salt to a cup of coffee has been practiced by Alton Brown, WWII soldiers, and different cultures worldwide.

Here are some reasons salting your coffee may be worth a try, and how you can salt your coffee like a pro. 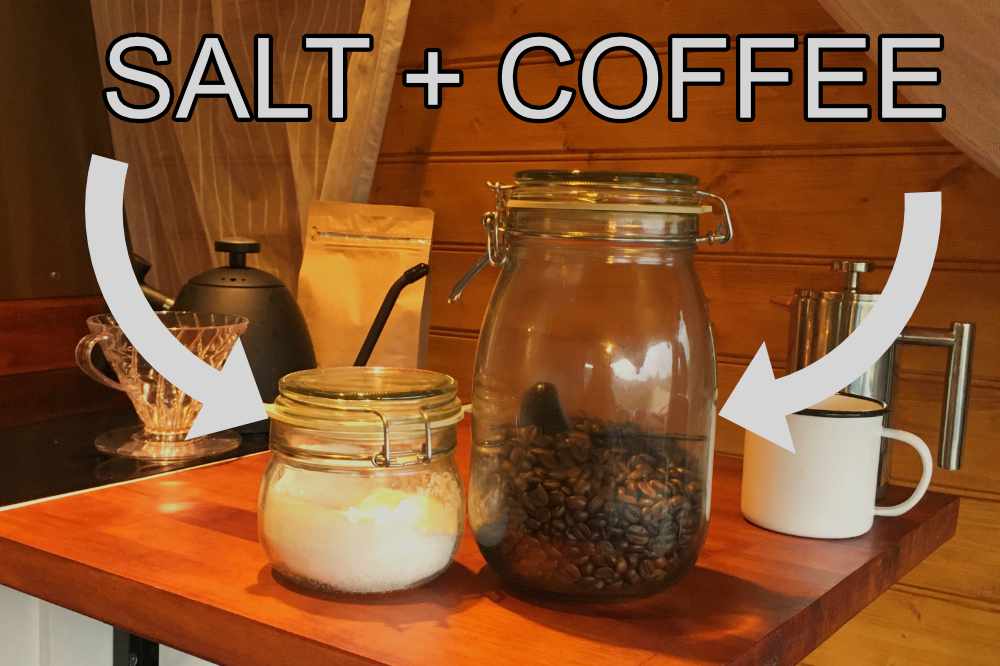 The Science Behind the Brew

While I don’t usually find myself adding salt to my coffee grounds to make my morning cup, a Salted Caramel Cream Cold Brew is very possibly my favorite Starbucks addiction. Something about the saltiness, sweetness, underlying bitterness and cream comes together to equal deliciousness.

But what makes our coffee taste bitter in the first place? And what is it about that salty flavor that appeals to our taste buds? The answer to these questions dips its toe into a bit of science.

Where Does the Bitterness Come From?

Many blame the caffeine in coffee for making their brew bitter. While it is true that caffeine makes up a small percentage of the bitterness of coffee, it is not necessarily the main contributor.

The bulk of the bitterness comes from other alkaloids as well as secondary compounds that form during the roasting process including phenylindanes, chlorogenic acid lactones, and denatured proteins. However, since caffeine is the word most common to our vocabulary, it tends to get most of the blame for the bitter flavor.

How Can Salt Help?

Salt, also known as sodium chloride, is one of the five basic tastes. When you taste coffee with your tongue, a release of calcium transmits a bitter flavor to your brain’s receptors. However, adding a bit of salt to your brew cancels out this signal so the bitter taste slides under the radar.

At the same time, a little salt increases the sweet and umami flavors inherent in the coffee bean. This means, that by adding salt to your coffee, you can block sour and bitter coffee tastes to get a smoother tasting cup. You also may find yourself needing less sugar in creamer in your coffee, as a result!

Just be careful to use the right amount of salt when you brew coffee. Otherwise, the receptors in your brain may miss mellow coffee flavors and just pick up on the salt! 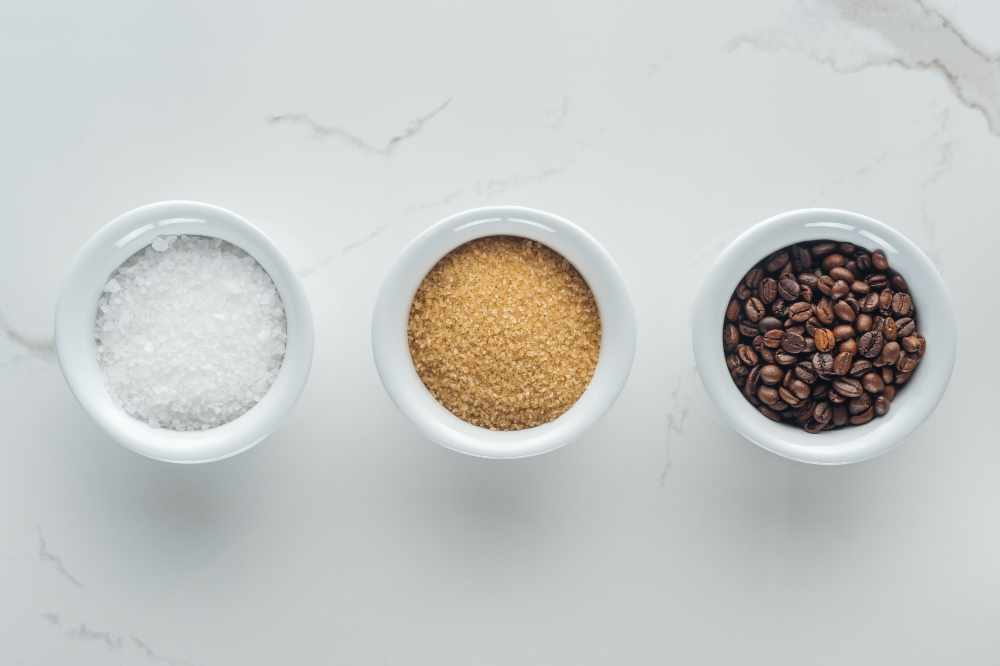 Who Adds Salt to Coffee?

How Alton Brown Does It

Alton Brown may be the most famous proponent of putting salt in coffee. The Food Network guru and cookbook author shared his coffee-drinking secret with the world in 2015. The special ingredient Brown added to get that perfect cup (which astounded many viewers) was, you guessed it, salt. If the food scientist and chef extraordinaire does it, it has to be worth a try, right?

To try his method, you can add a quarter teaspoon of kosher salt to every six tablespoons of grounds in your coffee maker. While some sprinkle the salt over a finished cup, Brown adds his to the grounds so the flavors can blend as they brew. This is one ingredient you will probably want to measure carefully so you don’t end up with a salty cup!

Although Alton Brown is perhaps the most current proponent for adding salt to coffee, the tradition goes back much further. 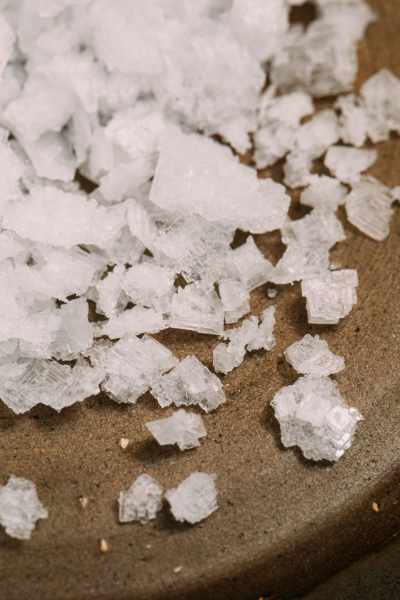 In America, soldiers in World War II started putting salt in their coffee. This can be attributed in part to the navy department’s desalination process, which turned seawater into drinking water. Although the water became much more thirst-quenching after this process, the sea salt could not be removed entirely. This brackish water led to a slightly salty tasting cup of coffee becoming the norm for the men in service.

Other branches of service also began salting their cuppa as a hack to fix the bitterness of coffee. Since an army cook was probably not a trained barista, we can guess that the coffee-making process would have left a little bit to be desired. And if your great-uncle ever told stories about war life, you would also guess that arguing with the cook about his brewing methods was probably not the best idea. By adding a pinch of salt to the brew, you could save a burned or over-brewed cup of coffee and get that much-needed jolt of caffeine to carry on.

Coffee Drinkers Around the World and the Addition of Salt

Countries such as Turkey, Hungary, and many others have a long-standing tradition of adding salt to their cup of joe.

On the other hand, if the groom to be is ready to marry the girl, he is expected to man up and drink the full cup of coffee no matter how much salt his chosen bride chooses to add.

Coffee lovers in Hungary, Scandinavian countries, as well as other coastal European countries have been known to add salt to their cups of coffee or brew coffee using brackish water.

Also, one of Taiwan’s top coffeehouses, 85C Bakery Cafe, came up with an Iced Sea Salt Coffee recipe over a decade ago that had many fans and bloggers buzzing. This recipe calls for a lightly sweetened cold brew coffee that is then topped with a layer of sea salt foam. This salty-sweet drink made many Americans believers in the power of salt in their coffee.

The Health Benefits of Adding Salt to Your Cup of Coffee

As long as you don’t have a problem with sodium, adding salt to your morning brew can also have health benefits in addition to the taste benefits.

Yes to Antioxidants and No to Additives

Coffee has many natural antioxidants that can be beneficial to your health. A cup of coffee can give you energy and also help you burn fat. Some studies also indicate that coffee could help reduce the effects of Parkinson’s, Alzheimer’s, and Dementia.

While coffee can have some good health effects, coffee creamers and sugars can detract from these benefits. Adding salt to your cup of joe can give your cup of coffee a sweeter taste which can help you eliminate (or at least reduce) unhealthy additives.

For those with acid reflux, a dark roast will be a better choice than a light or medium roast. Even though the dark roast may taste more bitter, it is lower in acidity than lighter roasts. If you need to keep your acid intake low, but you find a dark roast to be too bitter, try adding a pinch of salt for a more mellow-tasting brew.

Finally, Is Salt in Coffee Worth Its Salt? 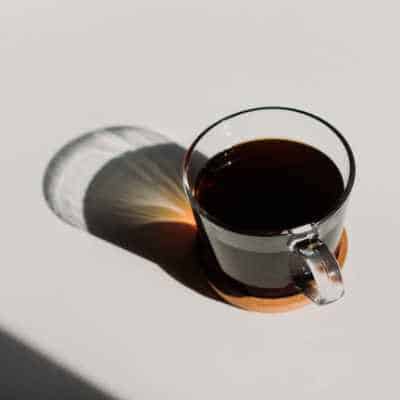 Salting coffee is perhaps more common than many of us realized. It is part of longstanding traditions in many European and Eastern countries and American soldiers came back from World War II salting their coffee cups. Also, Alton Brown, a culinary hero is a believer in its power!

So, if you love the taste of a cup of joe but are not a fan of the bitterness, it may be worth giving salt a try. Then again, don’t add too much salt or you may just be trading one undesirable flavor for another.

While some bitterness is just inherent to the bean, you can add ingredients to make it less bitter. You can add a fat, sugar, or (drumroll) salt to mellow out your cuppa. Also, starting off with a quality coffee and making sure you have the proper coffee to water ratio will help.

Is it possible to froth creamer?

For Coffee-mate fans and non-dairy coffee lovers, you will be happy to know that you can froth more than just cow’s milk! That being said, some creamers will froth better than others.

Skim milk will make a lighter frothier foam, while creamers that are heavier in fats will make a denser, more decadent foam. For different ways to froth your preferred creamer, check out our article Can You Froth Creamer?

How do I keep from over-extracting my brew?

Your coffee can easily end up tasting more bitter than it has to if you over-extract the brew. You can prevent this by checking or adjusting your coffee to water ratio and watching your brew time.

If your coffee tastes too strong, you can back down a bit on the grounds and add more water to your ratio. To help you find the right balance for your brew, you can use our handy-dandy Coffee Quantity Calculator App.