How Much Caffeine in Starbucks Doubleshot

Energy drinks are like coffee, but with much more caffeine (and much more energy). Drinks like Monster, Red Bull, and Hell are popular choices to keep energy levels high. However, most of these highly caffeinated drinks taste nothing like coffee. Enter Starbucks.

Besides offering in-store shots of espresso, Starbucks partnered with Pepsico to enter the energy drink scene. The result of this partnership was the Doubleshot and Tripleshot canned drinks. One can of Starbucks Doubleshot Energy Drink contains 120 milligrams of caffeine per 6.5-ounce size and 135 mg per 15-ounce size. Starbucks Tripleshots pack in almost double the energy with 225 mg of caffeine in a 15-ounce can.

So if you need a hefty dose of caffeine, does a canned drink or a regular espresso shot pack the most punch per ounce? We’ll see what ingredients are in the Starbucks Doubleshots and compare these canned drinks with other in-house Starbucks espresso drinks. 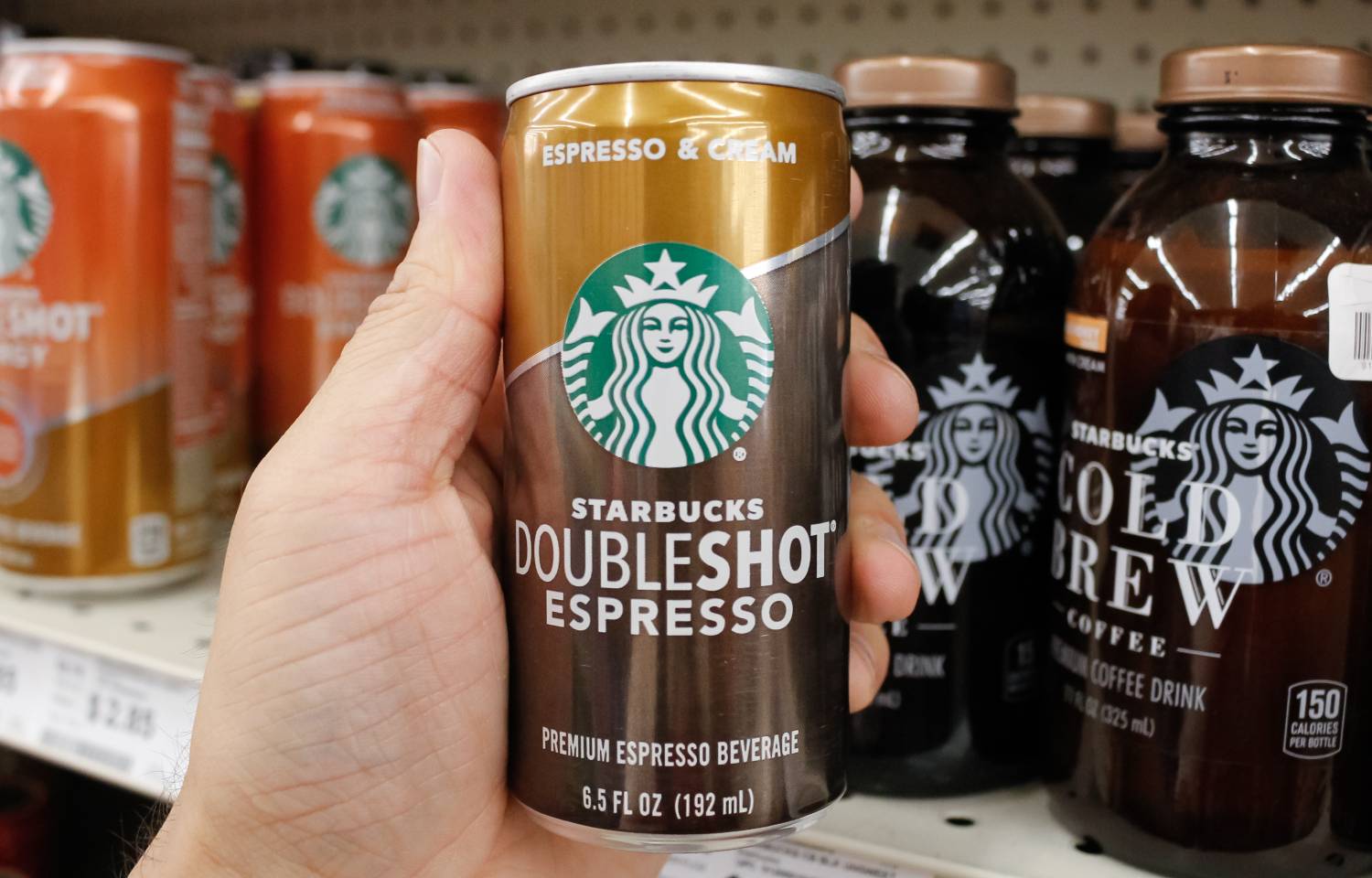 Looking at a can of Starbucks Doubleshot Energy Drink, you expect it to contain coffee. (It’s a Starbucks drink, right?) But is a Doubleshot more like a Starbucks coffee, or more like an energy drink? This canned beverage has a lot in common with both.

A Starbucks Doubleshot Energy Drink lists Brewed Starbucks Coffee as its first ingredient. The brewed coffee is responsible for the energy you get from caffeine. This drink also contains reduced-fat milk and skim milk plus sugars for a sweet and creamy coffee drink.

However, this canned drink also has several ingredients in common with many other energy drinks. Doubleshot’s include taurine, ginseng root extract, inositol, and guarana. Monster, Hell, Rockstar, and Red Bull energy drinks also contain some or all of these ingredients.

Let’s see how each ingredient can give you a boost.

Taurine is an amino acid that can help to calm the brain, lower cholesterol, and regulate heartbeats. This amino acid is found in animal tissue, fish, milk, and the human body. However, many energy drinks use a synthetic version. The human body should produce enough taurine on its own, and supplements should not be necessary. However, it is thought that when the body is under stress, taurine levels may be depleted and supplements can help.

Ginseng is an herb that may reduce stress and fatigue, lower blood pressure, and help with memory and alertness. While not recommended for children, ginseng may be beneficial to adults. Most energy drinks contain very minimal amounts of this herbal supplement.

Inositol used to be classified as a B vitamin but is currently classified simply as a carbohydrate. Inositol is naturally present in beans, grains, fruits, and nuts. It is generally safe for consumption and is believed to benefit the nervous system and serotonin levels.

Starbucks doubleshots come in a variety of flavors. Here are some Starbucks Doubleshot Energy Drinks that you can try:

While Doubleshots come in a variety of flavors and have extra energizing ingredients, Starbucks also offers comparable drinks in-house. Let’s see what espresso drinks Starbucks offers on its regular menu. 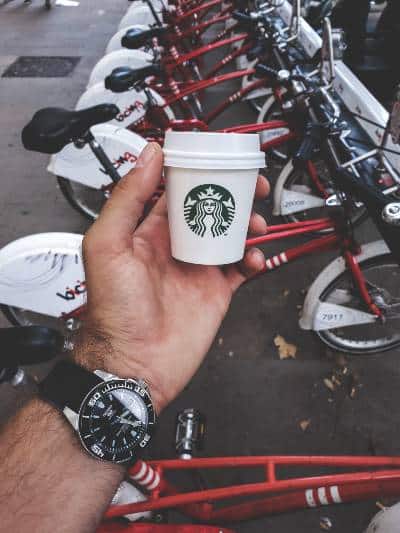 While you can pick up a ready-to-drink Doubleshot Energy Drink from almost any store, Starbucks also offers other espresso options in Starbucks stores. Each of these drinks is advertised as containing two shots of espresso, but the difference in caffeine content may surprise you. Let’s look at Starbucks canned drinks and in-store drinks side-by-side.

A can of Starbucks Doubleshot energy drink contains coffee, milk products, sweeteners, and also other stimulants to add extra energy. In a 6.5-ounce size, you get 120 grams of caffeine. This is a little less than a regular double shot of Starbucks espresso in-house. (But much more caffeine than the 34 mg of caffeine you find in a 12-ounce can of Coca-Cola.)

While Starbucks Doubleshot Energy Drinks are full of caffeine and stimulants, Starbucks also has a Doubleshot canned drink that is a blend of espresso with cream and a few other ingredients. These Doubleshot espresso drinks are similar to Starbucks’ bottled Frappuccinos. They contain 110 mg of caffeine per serving size, but do not fall into the energy drink category. 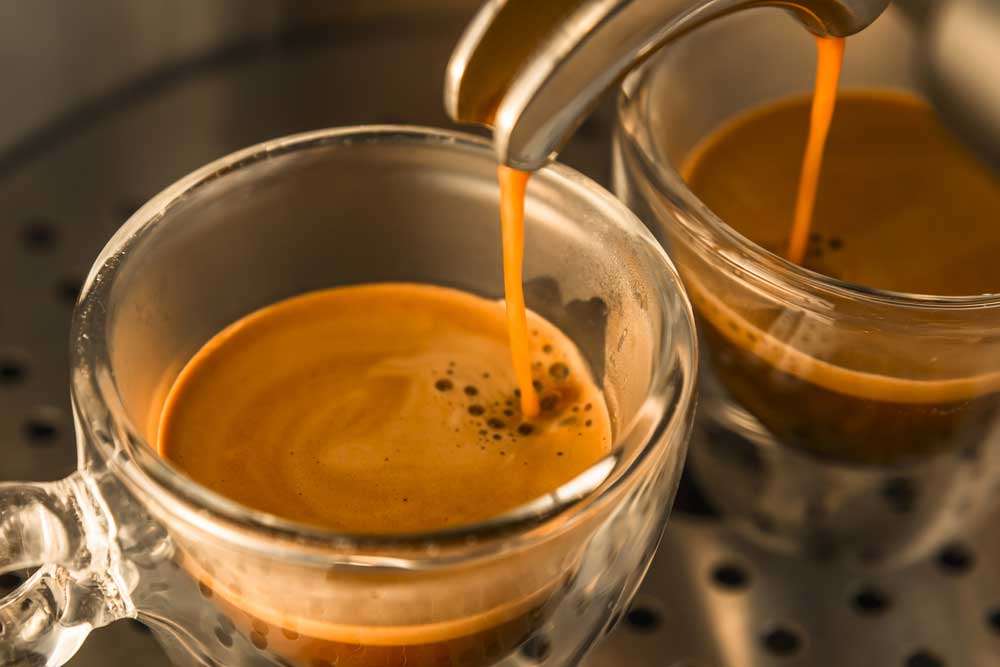 An in-house version of Starbucks double-shot espresso is called a doppio. The two shots of espresso are only 1.5 ounces in size and contain 150 mg of caffeine. To make this drink a bit fancier, you can ask for an Espresso Con Panna and get a dollop of whipped cream on top.

If you want a cup of coffee that’s easy to pack and take on the go, a Starbucks coffee energy drink can do the trick! You won’t get quite as much caffeine as an 8-ounce regular Starbucks coffee (unless you choose a Tripleshot Energy Drink). However, you can get some extra energizing ingredients that will help you perk up your afternoon. Let us know which flavor is your favorite!

At Starbucks, you can get a coffee drink that is high in caffeine, or you can opt for Frappuccinos and teas that are caffeine-free. The drink with the highest amount of caffeine at Starbucks is a Venti Blonde Roast filter coffee. This hot drink contains 475 mg of caffeine. If you are looking for a cold drink, the Trenta Cold Brew contains 360mg of caffeine.

Do energy drinks contain a lot of carbohydrates?

What are the cup sizes at Starbucks?

Starbucks cup sizes range from a small 8-ounce cup called a short to a Trenta size, which is 31 fl oz. In between these two extremes, you have the Grande with 16 fl. oz., the Venti with 20 fl. oz., and the Cold Venti with 24 fl. oz. How many shots of espresso and pumps of syrup your drink has depends on which size you choose. The Grande and Venti sizes usually contain the same amount of espresso shots which is surprising to many customers. This means that the Grande drinks have a stronger coffee taste.