What is Turkish Coffee? (It’s Brewed In More Places Than Just Turkey)

I am a keen traveler but only keen to travel to where there is great coffee. After learning about espresso in Italy and all the wonderful freshly roasted coffee they serve in Greece I just had to move east to find out what Turkish coffee is all about.

If you’ve ever seen Turkish coffee being prepared you’ll know that it differs from the typical methods we use in the west. The special-shaped pot, the finely ground coffee, and the whole technique is just a little bit removed from your simple pod machine or drip coffee maker.

After traveling across the beautiful country of Turkey, from the dramatic north to the stunning Mediterranean climate of the south, I’ve experienced the bold brew that is Turkish coffee as well as learned a bit about the culture that surrounds it.

In a nutshell, Turkish coffee is a brew method that removes the need for filters and fancy equipment. It takes finely ground coffee and almost boils it in a special pot called a cezve to create a thick and dark cup of coffee that will really blow your socks off.

Of course, there’s more to it than this, here’s a deeper dive into Turkish coffee and everything you need to know to order one for yourself. 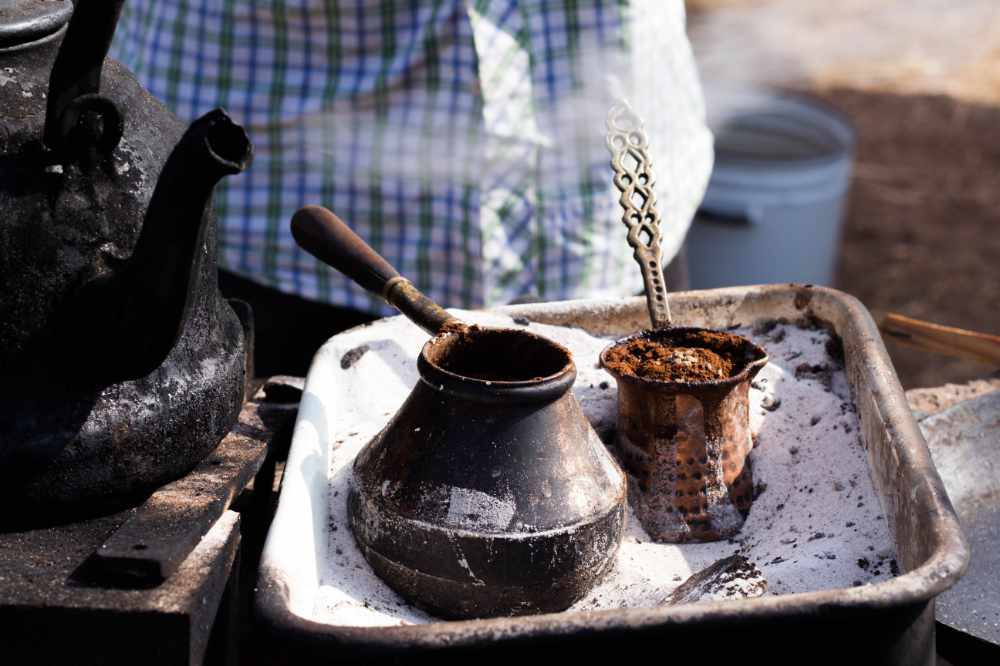 What Is Turkish Coffee?

Turkish coffee is the name given to a particular brew method that’s popular in Turkey and surrounding countries. It’s one of the oldest coffee brewing methods recorded and it works by heating ground coffee in water until almost boiling in a special type of coffee pot. The coffee is served unfiltered so you have to wait a few minutes for the grounds to settle to the bottom of the cup. Traditional Turkish coffee is fairly bitter in taste and has an intense full body with a thick texture. It’s common to find it brewed with sugar to balance out the favors.

The Ottoman Empire is where this coffee preparation method is first referenced. This Empire controlled much of Southeastern Europe, Western Asia, and Northern Africa from the 14th century to the early 20th century. 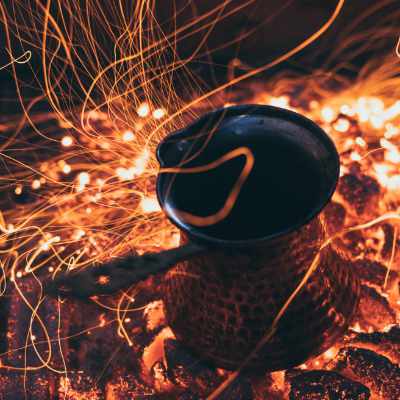 Coffee was prepared and enjoyed in this manner for hundreds of years all over the Arabian Peninsular, the middle east, Greece, the Balkans, and northern Africa.

Ottoman coffee houses first appeared in Istanbul in the 16th century and these were a distinctive part of the Ottoman empire history. This is where men from all levels of society would gather together to enjoy coffee and this is where Turkish coffee was first enjoyed.

By the mid to late 17th century, Turkish coffee culture had made its way to Britain and France where this coffee tradition still exists today.

Initially, due to the strength of this beverage, Turkish coffee was illegal in the Ottoman empire as it was considered a drug. Eventually, this rule was changed as the consumption of the drink grew in popularity.

To make a cup of Turkish coffee you need a Turkish coffee pot. This is a small device that sits on a flame or hob. It has a pouring spout and a long, heat-proof handle for the barista to hold. These pots come in a variety of shapes and sizes and are made out of a range of materials. Silver is regarded as the best option for heat retention but it is pricy. For this reason, copper is the most popular material used as it has similar properties to silver but is much cheaper to buy.

The coffee pot is known as a cezve (sometimes called jezve or gezve). These are also known as an ibrik and the names are used interchangeably around the world. Alongside the small pot for making the coffee, you’ll often see small cups, similar to an espresso cup being used to serve the coffee. This is called a demitasse. 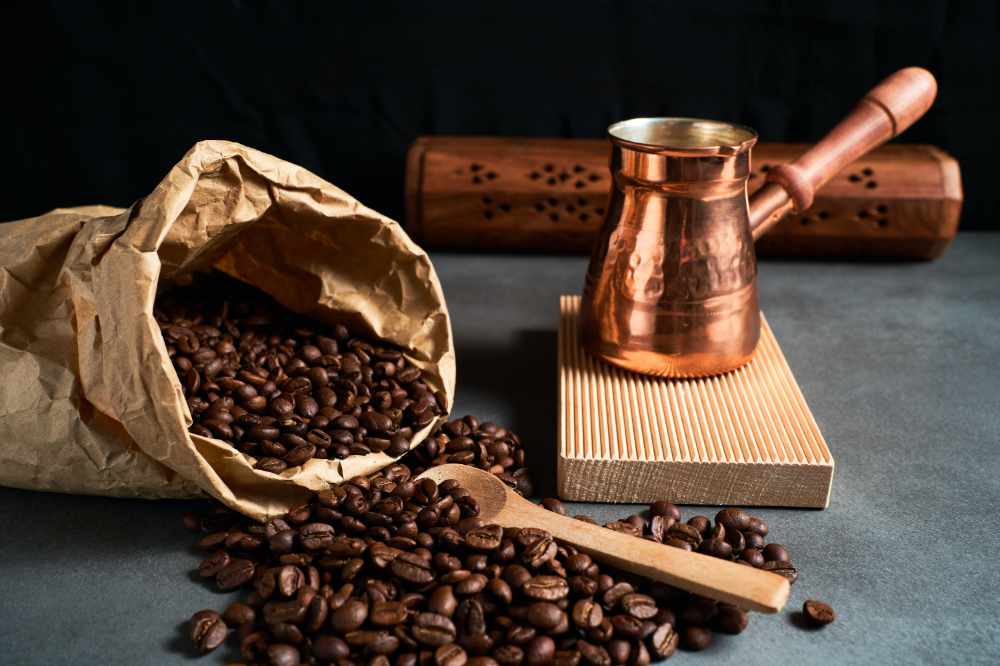 No matter which way you prefer to drink coffee, arabica beans are the best choice for flavor and quality. They contain subtle notes of delicate flavors and less bitter compounds. Occasionally robusta beans are chosen as they have a bolder taste and are high in caffeine. These are widely regarded as poorer quality and bitter tasting.

The coffee is ground up to the finest grind possible and is a fine powdery texture. The ground coffee beans are so fine in texture they often clump and clog up in electric grinders so a manual coffee grinder is sometimes the only option.

The coffee is added to cold water in the cezve at a 1:10 ratio. The coffee maker is placed over a heat source and warmed until it begins to froth and foam on top. This happens just before the water boils and it’s important to remove the pot from the heat before it reaches boiling point otherwise the coffee will burn. 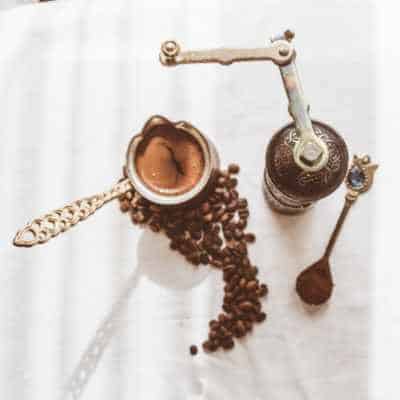 The foam settles and the pot is sometimes returned to the heat up to three times depending on the brewer’s preference. If sugar is requested then this should be added in the brewing stage and not after serving.

The coffee is poured into a demitasse and it’s best to let it sit for a while so the coffee grounds settle on the bottom. Stirring the coffee acts to re-suspend the grounds so is best avoided.

Turkish coffee differs from other brew methods due to the coffee to water ratio as well as the serving size. A regular filter coffee uses around a 1:15 ratio; so for every 1g of coffee you add 15ml of water. This is the same for french press and pour-over coffee making. Espresso is much stronger and requires a 1:2 ratio; so for a single shot (25ml) of coffee you need 12g of coffee grounds.

Turkish coffee requires a 1:10 ratio so it makes a drink that’s stronger than drip coffee but not as intense as a shot of espresso. The coffee is typically served in 2-2.5 ounce shots (60-75ml) so is similar to a double shot of espresso. 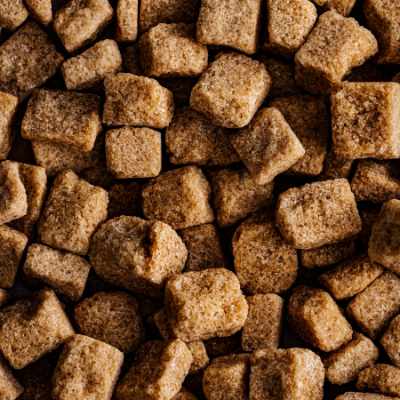 Due to the fine grind of coffee used as well as the high brewing temperature, Turkish coffee is often bitter in taste. It is easy to transform this into a sweet treat by adding a little sugar. The sweetness counteracts the bitter coffee taste but it’s really important to add this in the brewing stage. If you add the sugar afterwards then the act of stirring it in disturbs the coffee grounds so you end up with a mouthful of grit when you go to sip your coffee.

Sugar is usually added as the coffee is being brewed by dropping one to two sugar cubes alongside the coffee grounds.

Occasionally, spices are added to Turkish coffee to enhance the flavors. Cardamom, cloves, and cinnamon are common additions to the standard coffee recipe. It’s not uncommon to enjoy this drink with a sweet treat as well such as the rich pastry baklava or a piece of Turkish delight.

A glass of water is a good accompaniment and is often offered in coffee shops when you order Turkish coffee. It helps cleanse the palate and gives you something to sip whilst the coffee cools and the grounds settle to the bottom of the glass.

What About the Grounds?

If you’re used to an ultra-smooth cup of drip coffee then you may be wondering how to deal with the coffee grounds. It’s an acquired taste and relies on the coffee drinker to be patient and gentle as they sip the coffee.

Leave the last few sips of coffee in the bottom of the cup to avoid a mouthful of grounds. These are then discarded or occasionally used for fortune telling!

The downside of keeping the grounds in the coffee cup is that they continue to brew even after the coffee is served. If you leave the cup longer than 4 minutes you can end up with an over-extracted cup of joe which only adds to the bitterness.

Another issue is, without using paper filters, all the oils from the coffee bean end up in your drink. These contain compounds that have been linked to a rise in blood cholesterol. If you’re worried about coffee and cholesterol levels then best stick to a brew method that uses paper filters to remove the grounds. 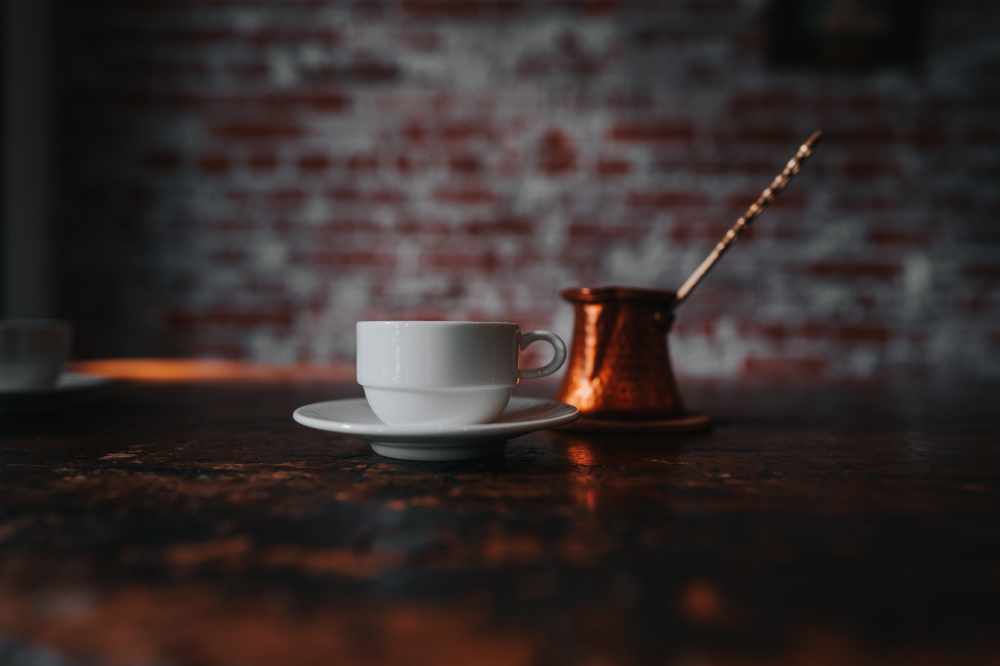 How To Order Coffee in Turkey

If you’re visiting Turkey and want to be able to order coffee then learning a few phrases can be really useful.

For a Turkish coffee, ask for a Turk Kahvesi. If you don’t want sugar then the word is sade (pronounced sah-deh). A little sugar is az sekerli, medium sugar is orta sekerli, and lots of sugar is cok sekerli.

Turkish coffee is a unique and bold way to enjoy coffee. Although it’s known as “Turkish” it has roots from all over European, African, and Middle Eastern countries surrounding Turkey so it has a lot of history. It’s easy to make but does require a special coffee pot and a bit of practice to get the technique just right. It’s not the ideal brew method for everyone but if you love coffee, it’s definitely worth trying at least once in your life!